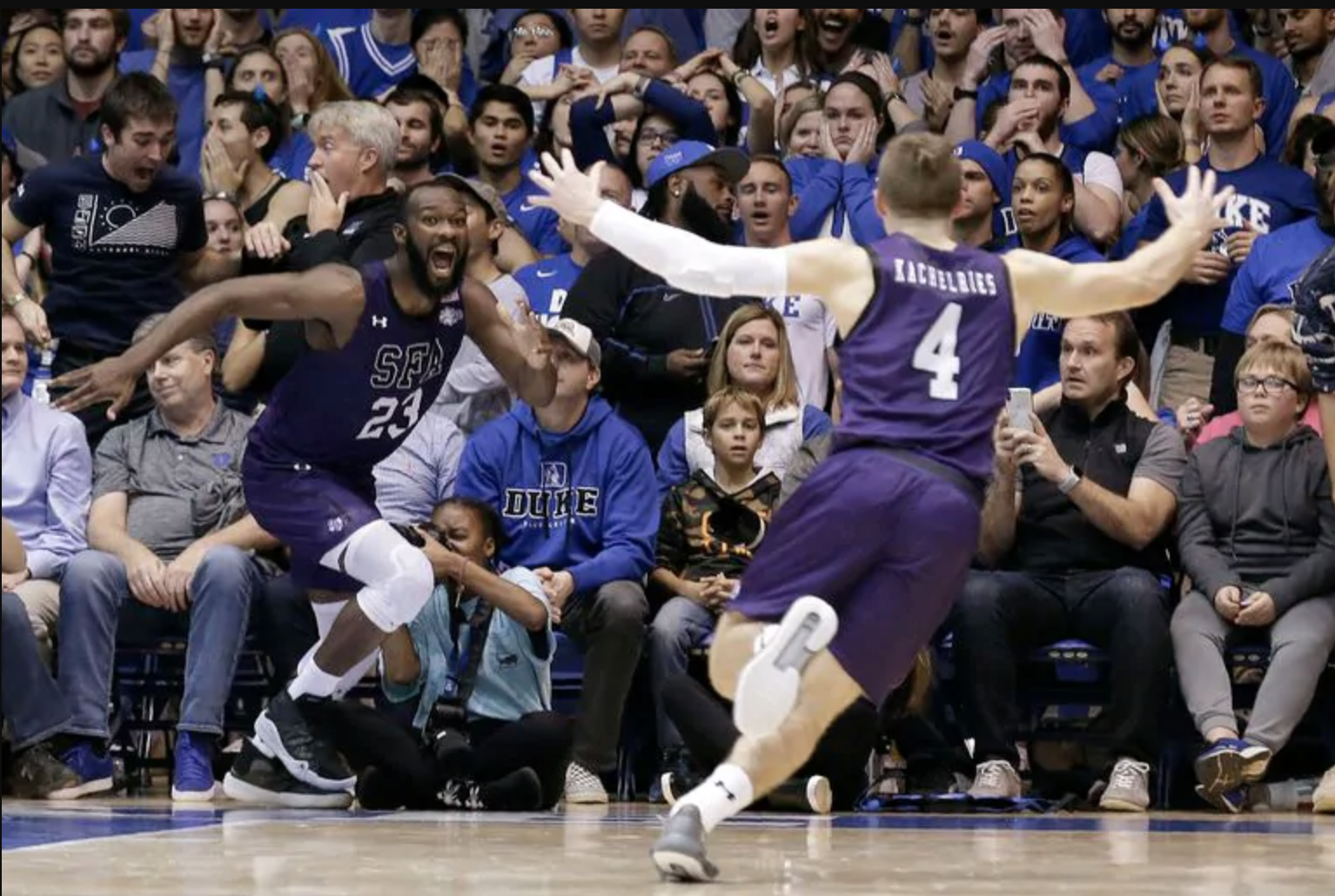 By Brian HoraceNovember 27, 2019No Comments

It was the perfect storm for a Blue Devil loss when Stephen F. Austin rolled into Cameron and stunned the Blue Devils 85-83. The Lumberjacks played harder, smarter and better than a Duke team that seemed complacent after winning in NY the week prior. The Blue Devils were careless with the basketball, didn’t communicate defensively and did not make adjustments to counter the Lumberjacks’ success. The biggest issues, surprisingly was defensively and not surprisingly free throw shooting.

Duke allowed the Lumberjacks, a much smaller team to score 64 points in the paint to only 36 be the Blue Devils. After shooting competently from the line in the first half the Devils could not buy a free throw, despite having half of the Lumberjack lineup in foul trouble Duke missed opportunity after opportunity to put the distance between the two teams. The second half saw the Blue Devils shoot only 11-24 from the line for 45%.

Duke allowed the Lumberjacks to come back from being down 15 to only being down 5 at the half. Duke’s 11 first half turnovers resulted in 22 points for SFA keeping Duke, even though they shot at a high clip in the first half (58%) under game pressure throughout the half.

The second half saw the two teams trade punches ultimately ending the second half tied. In the waning moments of overtime the Blue Devis turned the ball over 3 straight offensive possessions and botched 2 chances to win the game. Nathan Bain scored a runout layup as time expired to seal the victory a fitting end as Duke for the game gave up 26 fast break points. The loss ends Dukes non-conference home winning streak that lasted nearly 20 years.

Opening Statement: “I want to congratulate Stephen F. Austin. They were better. Bottom line. They were tougher than we were. They played with great poise and we helped them. You can’t give up 64 points in the paint. We don’t even give up 64 points and we gave up so many lay-ups. You go 11-for-24 from the foul line in the second half, it’s just a recipe to lose. We weren’t deserving of winning. That team was deserving of winning and they won. To win in overtime on that last play – the last play was really symbolic of eight or nine plays that they had where they had free lay-ups. We did not respond well to winning at New York and no matter what we said to our team, my feeling is they thought they were going to win. I’m not going to say they thought it was going to be easy because nothing is ever easy, but they just assume you’re going to win instead of being in a fight to win. The way the first half went, you could tell that team was well prepared and tough. They’re old and good and well-coached. They have a good tradition. We didn’t respond at timeouts or halftime to a different level of emotion and we lost. It’s a very difficult loss, but if we would have won we would not have been deserving of winning. You’ve got to give credit to them. They were really good. [Kyle Keller]’s a good coach and has a good program. They out played us.”

When asked about SFA forced turnovers: “They won. They forced turnovers. That’s what they do. They force 25 or 26 a ball game. A key factor of the ball game is to be strong with the ball and we were not strong with the ball. That’s the easiest answer. You have to be strong. If someone is going after you hard, you better catch it hard. We were catching it with one hand and trying to make a move. If it’s physical that ball is not coming with you. It’s not a foul. It’s the physicality of the game. You have to catch it. It’s not a game where territory was easy, so you have to fight through. We were not good and they made us that way. This is not about us not showing up. They played really well. Sometimes when I’m talking about what we didn’t do, I don’t want to disrespect their performance. Their performance was outstanding and they deserve their recognition for that. They did it to us. They made us look bad.”

On Kevon Harris: “[Kevon] Harris was killing us. We just tried to do something different. The one kid who’s a good shooter we just left him alone, which is a mistake. He’s their shooter… guard him.”

On not finishing plays: “Some of the free throws… You got to the line for something right by the bucket. We didn’t finish. Vernon [Carey Jr.] was 8-for-10, but he got fouled a lot. When you miss on a foul it doesn’t count as a miss. You start adding free throws and your misses, even if we play the way we played, we win. It’s a matter of toughness. This is not about one play. This is about how we play, which was not very good.”

“[Stephen F. Austin] played harder than us tonight. Down the stretch, some balls didn’t bounce our way, we didn’t hit a lot of shots, and because they played harder, they came out with the win.”

When asked about the final play of the game: “It was tough to see. The ball just kind of popped out, and the kid took off with it. It was kind of a weird play, but it was on us, for sure.”

When asked what Stephen F. Austin did to get so many run-outs and easy transition baskets: “I’m not sure about that one. That’s one we talked about, as well, after the game – how many points they had in the paint and the transition buckets that we were giving up. I think it goes back to them playing harder than us and being tougher.”

When asked what the message from the coaching staff was at halftime: “It was the same message that we had after the game. We were up a bunch and let them back into the game. And they had confidence and were playing hard, playing really tough. We weren’t playing the same way we had been playing all year, with the same toughness and hunger that we’ve had.”

When asked what Duke head coach Mike Krzyzewski’s message was to the team after the game: “He was disappointed. He knew that it’s not even like we lost it at the buzzer. It shouldn’t have even been that way in the first place, if we did our job and defended and played as hard as we know we can. It’s a 40-minute game. We’ve got to play for 40 minutes.”

“We’re all disappointed in ourselves. The Duke lineage, they haven’t lost a non-conference game here [in Cameron Indoor Stadium] in 19 years, so for us to be that team kind of stinks. Actually, it stinks a lot. That stinks, for sure.”

When asked about the final play of the game: “I just remember somehow [the ball] just got out. Somebody got it and at that point, I didn’t think he was going to get there in time. Coach [Mike Krzyzewski] talked to us the whole game about, ‘Somebody’s got to get back.’ And it hurt us at the end.” “We’ve just got to be hungrier. We’ve got to want it more. [Stephen F. Austin] got confident and a team with confidence is tough to beat. That was on us. We left it open too much and we got what we deserved. We didn’t play hard and we didn’t play our kind of basketball. I think we gave up, like, 64 points in the paint. We’ve just got to internally deal with it and we’re going to bounce back from it. We can’t dwell on it. We’ve got a game on Friday [versus Winthrop] and we’ve got 30 more games. But this one hurts for sure.”

“I just appreciate Coach K for playing us. He gets to choose who he wants to play each year and he doesn’t have to play us, ever. We’ve tried to play him in the past and his dance card is full. What an honor for our little school in Texas to come in here and just play. He’s such a classy guy, he’s done so much for the sport. He’s done so much not only for the players who have played for him but coaches. He’s made all of us better, just as a selfless, caring man. He’s made me better. It was fun to scout him because I haven’t scouted him since I was at Oklahoma State in a 2000 NCAA Regional in Syracuse. I try to watch what they do.”

On forcing Duke into 22 turnovers: “That’s how we play but they’re playing Stephen F. Austin. We were lucky. They’re coming home and they haven’t lost here in two decades, after playing in Madison Square Garden where they just smashed Georgetown in the second half. They’re at home the week of Thanksgiving. They were probably overlooking us. We were just lucky. That’s what we do defensively and we had a senior, Kevon Harris, keep us in the game in the first half. He’s helped us win a lot of games since he’s been here.”

On Kevon Harris running the offense in the first half: “Well, my point guard, John Comeaux has got an IV right now, he has cramps. He got so excited. It was sort of our game plan to have Kevon run the offense, because Tre Jones is so good defensively. John gave us all he could. Really, I thought the play of the game was when [David] Kachelries hit the three against the zone. That gave us life because Kevon was the focus of their defense.”

On beating the No. 1 team in the country: “We made history for Stephen F. Austin. We’re now 1-0 against the team that’s ranked No. 1 in the country in the AP poll. We’re a one-bid league, ask me on Selection Sunday if it means anything. I’m sure Coach K will get after his team tomorrow and they probably won’t have a good Thanksgiving because of this, but it will make their team a lot better. We need to remain humble because we only get one bid into the NCAA Tournament. Hopefully, this will give our league some national respect because of how good our league is.”

• Tonight’s game was the first meeting between Duke and Stephen F. Austin.

• Over Duke’s 150-game non-conference home winning streak, none of those games were decided in overtime.

• Duke is now 69-60 all-time in games decided in overtime, including 33-27 in overtime games under Coach K.

• Tonight’s game marked the 459th consecutive sellout at Cameron Indoor Stadium, dating back to Nov. 16, 1990 — the longest active streak (by time) in either men’s college basketball or the NBA.

• Freshman Vernon Carey Jr., recorded his fifth consecutive double-double with 20 points and 11 rebounds on 8-of-10 shooting from the field.

• It is the longest double-double streak at Duke since Marvin Bagley III went for five straight in the 2017-18 season. Bagley also had a seven-game streak earlier that season.

• Carey blocked seven shots – a career high – and the most by a Blue Devil since Marques Bolden had seven versus Auburn on Nov. 20, 2018.

• Sophomore Tre Jones had his first career double-double with 17 points and 12 assists.