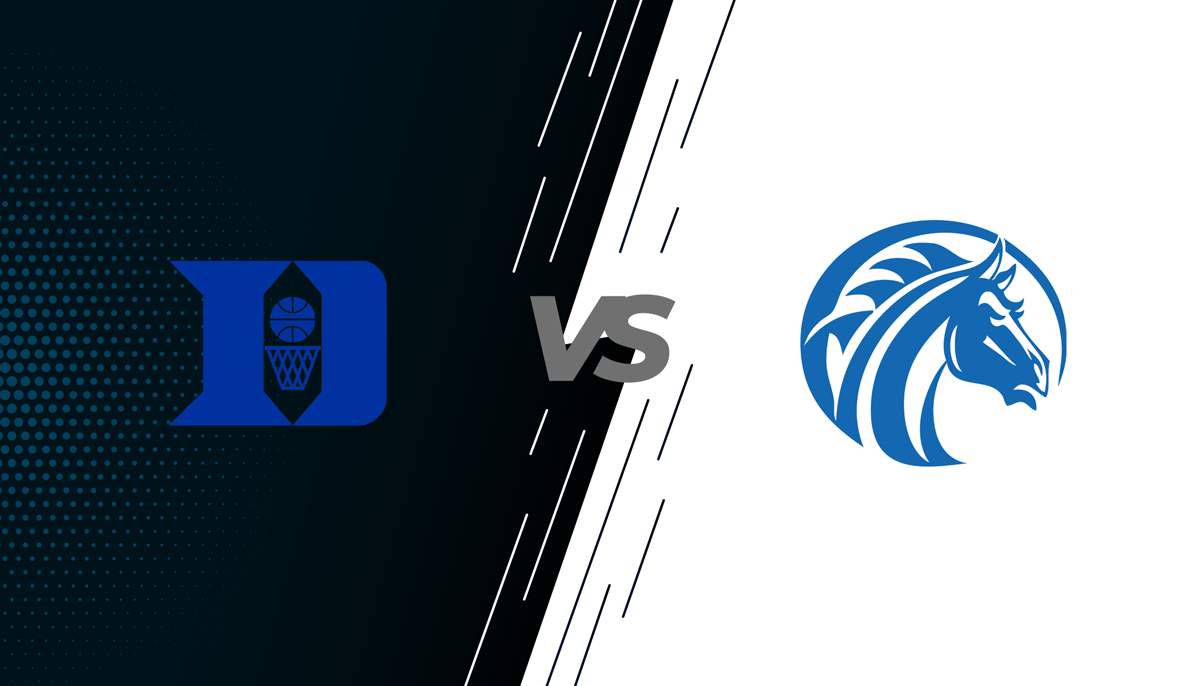 By Brian HoraceNovember 3, 2022No Comments

In their last tuneup before the beginning of the season and their first real game against Jacksonville the Blue Devils welcomed Fayetteville State to Cameron Indoor Stadium. Fayetteville State, a team that returned eight players from a team that went 21-9 overall last season, won the CIAA Tournament and are the favorites to repeat.

Graduate student transfer Ryan Young scored Dukes first bucket of the game off of a feed from junior guard Jeremy Roach who ended his night with 8 dimes. An early 12-1 run put the Devils comfortably ahead in the early going. The Blue Devils never looked back led by grad transfer Jacob Grandison (17pts) who shot 6-9 from the floor including 3-6 from beyond the arc. Freshman Mark Mitchell played aggressively and with a high motor for the Blue Devils and was able to grab 6 boards and 2 steals to go along with his 15 points. Ryan Young and Jaylen Blakes rounded out the double figure scorers with 12 each.

The Blue Devils made a concerted effort to get the ball inside via drives and feeds to bigs Ryan Young and Kyle Filipowski. Duke nearly doubled up the Broncos in paint points with a 42-24 advantage.

Even without 2 probable starters the Blue Devils pounded the Broncos in the first half, playing fast and loose. Duke turned 7 first half turnovers by the Broncos into 11 points on their way to 15 for the game. Coming off of a controlled scrimmage that saw them shoot 2-17 from beyond the arc the Blue Devils were able to go 8-19 from 3-point range for 42%, a sigh of relief for Duke fans assuredly. 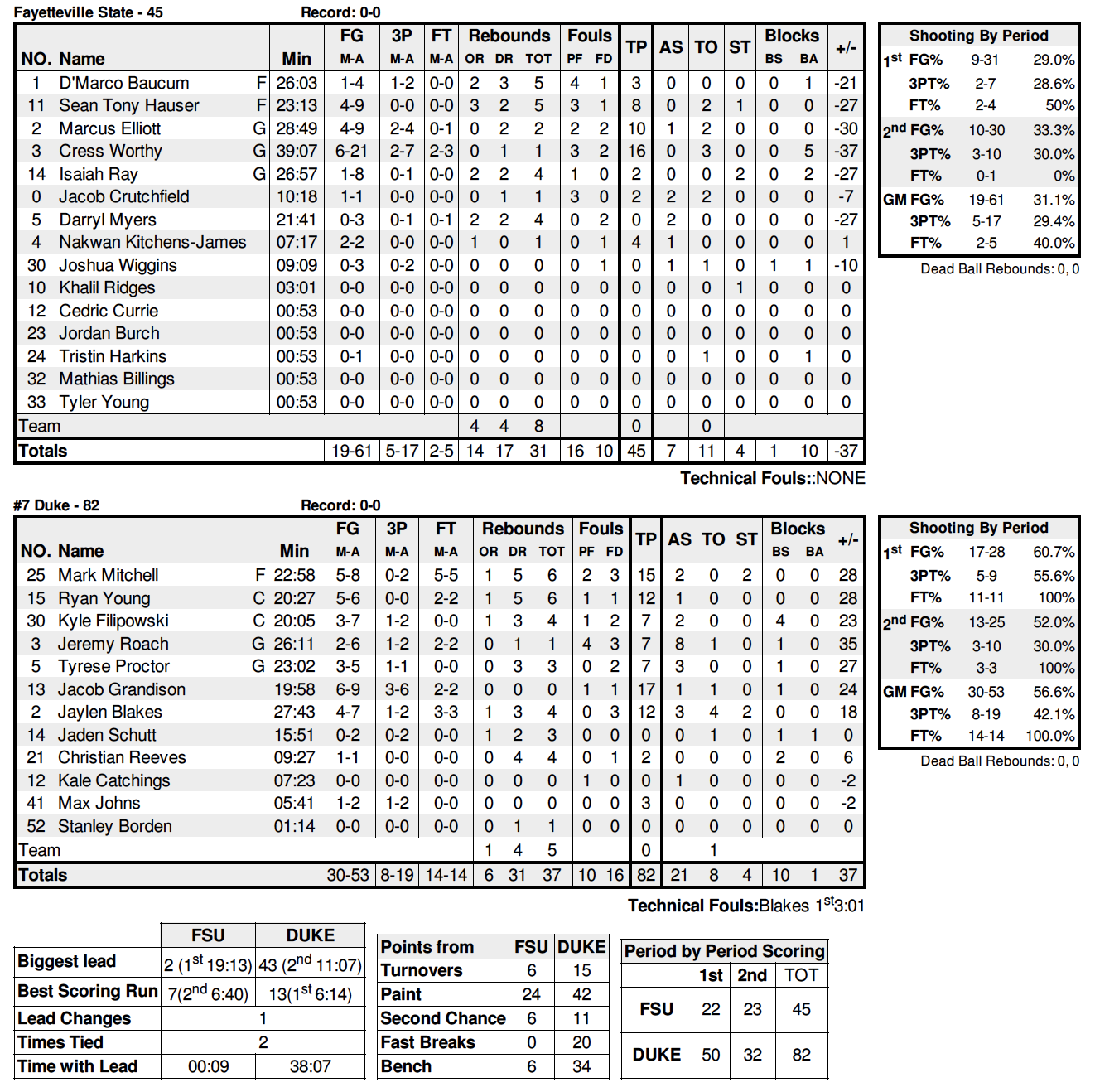 “It’s great to be back in Cameron tonight. I thought our guys did a great job of sharing the ball and playing with great effort and energy. There were probably some nerves in the beginning. It’s your first time playing you think about the entire summer, the workouts that we have, and the fall. We finally get out on the court against somebody else. I thought it was really important for our guys. We are still learning about each other and how to play with one another. I think it starts with our energy on the defensive end. It carried over to our offense, how we shared the ball and play together. I think Jeremy [Roach] set the tone for that. He had eight assists and one turnover. Tyrese [Proctor] had three assists. We’ve got to get those guys along with Jaylen [Blakes]. Jaylen had a few turnovers at the end, but he was being too unselfish, trying to get guys shots. For me I am really pleased with today, playing Fayetteville State. They are champions in their league. They are going to be one of the best teams in the CIAA this year. It was an honor to play those guys. I’ve known about Fayetteville State for a long time, Jeff Capel and his dad. It was an honor to play them and walk out of there as a head coach for our first game.”

“That’s important for us. The offense of the other team isn’t dictating how the game is going to be played and Fayetteville State runs a lot of actions. They run some really good stuff, so for our team, that’s their first time being put into some of those situations. On the fly you really need to communicate and talk. I thought the intensity and understanding — [Cress] Worthy, he could go off at any time and we were fortunate he didn’t make some shots tonight, but it’s key defending somebody else’s best player or best scorer. I am really pleased with our defensive effort. If we can just finish it off with some rebounds, that would be great. That’s the next step. We have to rebound and to a much better job there, but good effort.”

“I still don’t know what their [Dariq Whitehead and Dereck Lively] status is. Dariq definitely won’t play Monday. He’s still a couple of weeks away. Dereck is still day to day. He’s been really ramping up. I think the big thing for both of those guys is not just being completely healthy, which they are right there. But you have to build up your game shape up again and we don’t want to put them out too early. They are working hard. They were out here right after our walkthrough today on the court, building up their conditioning. They’re working every day to get back out there with us as soon as possible.”

“We definitely want to play fast. We have four guys on the floor, at times even five that push and start the break. We made really good decisions. We had them on their heels and ran to spots. When we had early opportunities to drive and get to the rim, we did a good job taking advantage of that. We want to play fast and it’s hard to play fast if you don’t get stops. For us we were able to do that tonight and we need to continue to do that.”

On being able to play small ball and get out in transition:

“It’s real fun just knowing that whoever gets the rebound can lead the fast break, so it gets us playing even faster, and that just proves how versatile we are – we have Mark [Mitchell] playing the five [and] he’s usually playing the 3-4, so you know it’s great lineups that allow us to push the pace for sure.”

On the team’s performance and getting ready for Monday:

On applying full court pressure defensively during the game:

“Definitely was a big emphasis, just getting after the ball. Their ball handlers were a little shaky with it, so we wanted to kind of apply some pressure, turn them a couple times, see if we could get some turnovers. That’s how we extended the lead in the first half.”

On the young guys playing their first collegiate game and playing in Cameron for the first time:

“I think it’s a big deal for them to get their first real experience playing against another team in Cameron, myself as well. Obviously, I’ve played a lot of college basketball, have a lot of games under my belt but this was my first experience in Cameron as well, so I think it was a good tune up. A really respectable opponent, so it was great to get a win under our belt and play against a team that crashes the boards hard, has really talented guards and players, so I think it was great for us.”

On leveraging the height advantage early:

“Yeah, absolutely. I mentioned it the day before yesterday when we were talking, but we can throw a lot of lineups at people. I think it’s a really good thing that we have so much length at the forward and center positions. I think you saw it tonight – we threw a couple different lineups out there, [Kyle] Filipowski and I played together, we’re going to be even taller and longer when we get Dereck [Lively] back, so its exciting to be able to give teams different looks, give them problems with our length and show how tall we can be out there.”