By Brian HoraceJanuary 11, 2014No Comments

Clemson thumps Duke 72-59 and welp, all I can do is call it the way I see it. I don’t mind the backlash, but Duke was outplayed and outworked. I can understand being outplayed, but not the latter. There is absolutely never an excuse for a Coach K team to get outworked. I have never seen that. Clemson took it to Duke. Even when Duke was leading in this game, the writing was on the wall: Duke took a step forward with chance after chance to put Clemson away, but Clemson would get a loose ball, or a rebound that Duke should have had position for and convert it.

I don’t really give a shit about numbers to be honest, because they can’t be as ugly as the game was. Duke collapsed. The defense started the game with promise. Duke began with several nicely defended series and a decent flow on offense but never did the things to put Clemson away. It’s been a common thread for Duke all season and Duke was true to form in this one. It does no good to point out specific offenders on defense because no one played it effectively or even marginally decently. Clemson saw the opening and exploited it, so kudos to them. Duke gave up put-back after put-back, and at some point you have to realize that this isn’t working.

The Twitterverse is calling for Marshall Plumlee, I say why not? How bad is he that you don’t even let him take his warm ups off? Defensively, you can’t get much worse, can you?

Coach K himself says he prefers a mistake of commission rather than one of omission; this is exactly the situation for this. I guarantee you that Marshall, Semi, and Matt Jones will make mistakes, but they won’t stand around and watch. They may go out and foul and miss shots, but the players you are using now are not boxing out, not getting open, not putting forth a Duke-like effort. Put the guys in that may be less talented or seasoned because, I guarantee you, you will get max effort.

One has to wonder a few things about this Duke team, did they believe the pre-season hype?  Now that it has been dis-proven, what now? Blaming size to me is the ultimate excuse, because there is size on the bench, and although I would like to see that size get minutes, to me the issue is effort. Lance Thomas played against size and held his own. Sure he benched 300-plus pounds but you know what? That is what he had to do, and he did it.

Duke is going to be judged by what it does in response to its shaky start. There is an opportunity ahead for this Duke team to either be the biggest comeback story in the NCAA this year after falling from grace or the biggest disappointment in the Coach K era. The difference between the two narratives is one word. Effort. 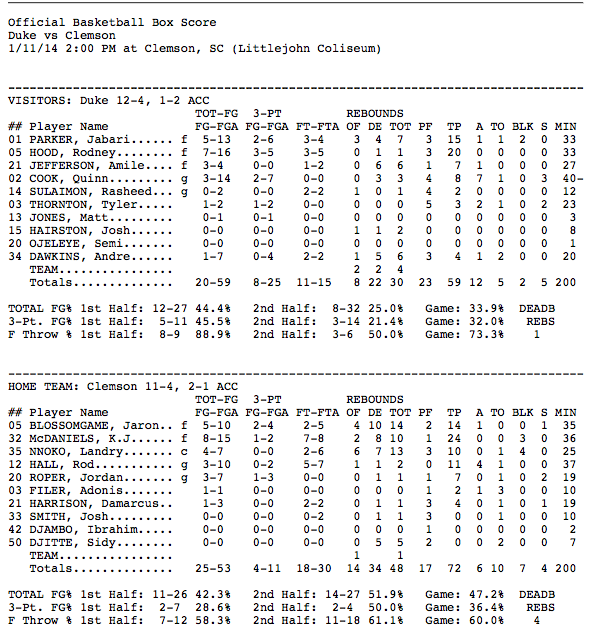