By Brian HoraceJanuary 26, 2015No Comments

Congratulations to Coach Mike Krzyzewski for achieving his 1,000th win against a very tough St. Johns team. Sometimes wins of a particular significance can be a unifying event for a team, Duke was in need of one. Yes Duke was coming off wins against Pitt and Louisville but still there were issues Duke had long stretches near the end of those games where they let up, they were not sharp and really didn’t finish strong.

Enter Duke in Madison Square Garden against a very athletic and gritty St. Johns team. The game had the feel of a tournament game, there was tension, there were runs, a very chippy atmosphere and finally for Duke redemption.

Duke started well, building leads methodically but with every lead that Duke would build the Red Storm would push back until finally taking the lead. They wouldn’t surrender that lead until deep into the second half. Duke looked tired, defeated and resigned to taking another “L” for most of the game but something clicked. Duke started to do what they did not do in the first half, they began to fight. They began to believe.

Shots began to fall, a Quinn Cook 3 point play, a Tyus Jones corner 3, some man-sized moves from Jahlil Okafor in the paint. The team seemed to grow up. The last ten minutes was like watching a Duke team of old. Feeding off of each other, playing good team defense. Not sure if it was the insertion of Marshall Plumlee to play alongside Jahlil but it seemed to coincide. Plumlee would finish the game with 2 points but more importantly 5 rebounds and some good defensive effort.

Once again Duke got a huge game freshman Tyus Jones who scored 13 of his 22 points in the second half and was 10 for 10 from the free throw line for the game. Jones hit a huge corner 3 for Duke in the waning minutes of the second half to keep the Duke run in full swing. Jahlil Okafor and Quinn Cook each score 17 and were both integral parts of Dukes second half awakening. Duke was tough, and gritty as they’ve been all year and they finally, in the last 10 minutes began to match the intensity of the moment and of their opponent. Something we’ve all been waiting to see.

It clearly wasn’t a pretty game for Duke in stretches, defensively Sir’Dominic Pointer was a beast scoring 21 against the Devils on 9 or 17 shooting. Rasheed Jordan also had his way with the Duke guards scoring 18. St. Johns did the things that were needed to win this game, they took care of the ball only turning it over 9 times to the 16 turnovers by Duke. The points off of turnovers were obviously in St. Johns favor to the tune of 16 to 9. Duke did have a heavy advantage on the boards (44 to 29), but still had a 1 point deficit in 2nd change points.

This win for the Blue Devils in addition to being a landmark victory for Coach K it ends up being one for the ages because it may very well be the day this young Duke squad grew up. 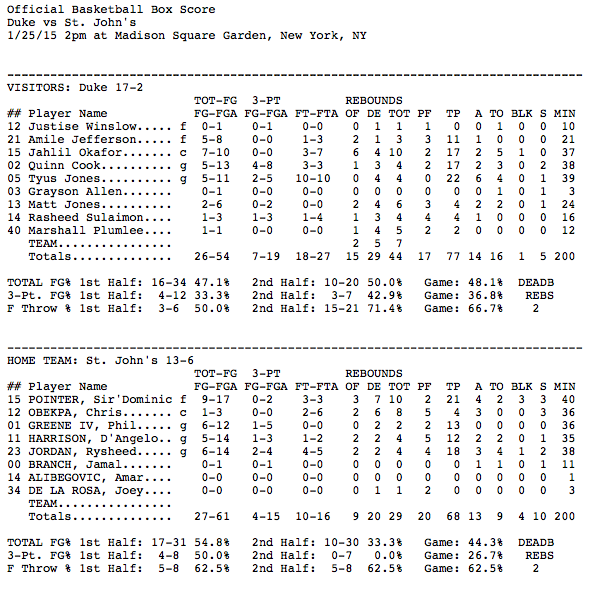