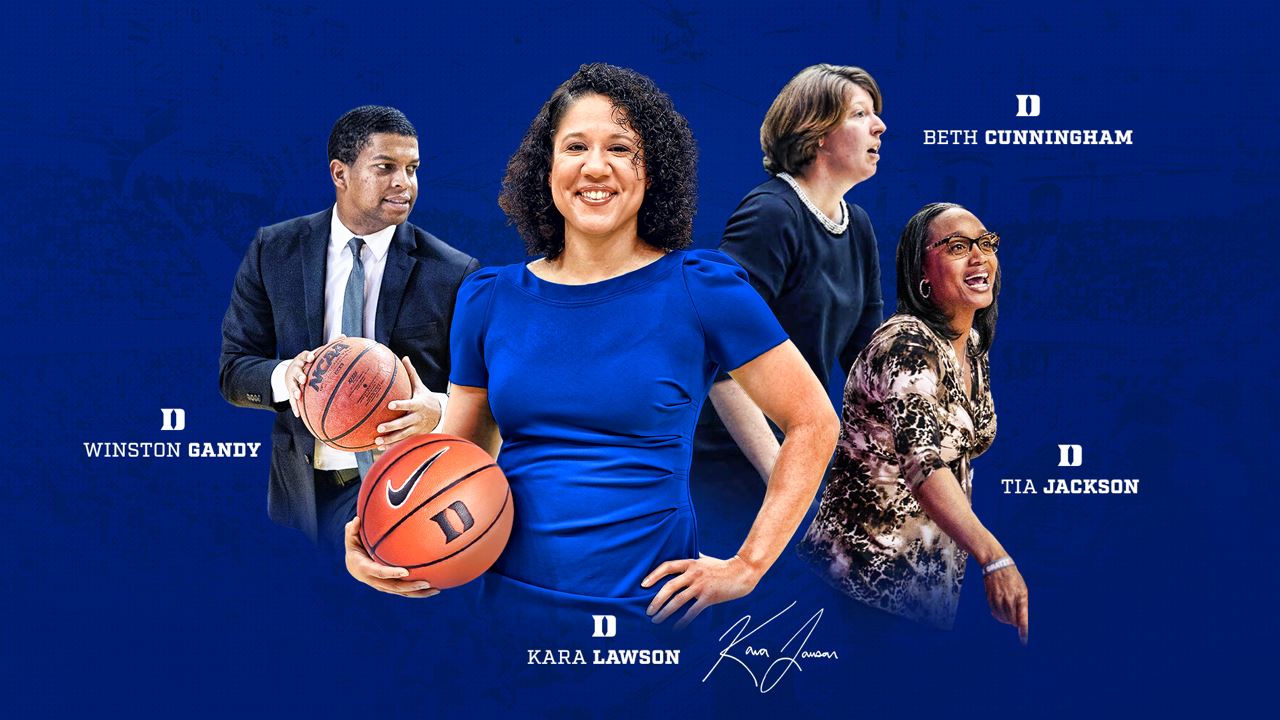 “Three of the most important decisions a head coach makes are in hiring assistant coaches,” said Lawson. “The way I approached it was trying to find individually-talented coaches, similar to building a team.  I wanted coaches that brought a lot to the table in terms of knowledge of the game, knowledge of recruiting, ability to build relationships and player development. All of these characteristics that you would want in a coach, you want your staff to possess as many of those as possible and be experts in a number of them. You can have individually-talented people, but you must have a group that fits together. You want a group that is balanced and that will play off one another well. I think we achieved that. We’ve got three coaches that are talented enough to run their own programs — two of them already have – and have great experience recruiting the type of young woman we want at Duke.”

Cunningham, who owns 19 years of collegiate experience including nine as a head coach, will arrive in Durham from Notre Dame where she helped lead the Irish to one of the best stretches in NCAA history with a 244-19 record over a span of seven seasons (2013-19).  This run of success included the 2018 National Championship, five NCAA Final Four appearances and six conference championships.

Gandy, who recently completed his third year on the Rice University women’s basketball staff, helped guide the Owls to three straight 20-win seasons, including one NCAA Tournament appearance and one Conference USA Championship.

A 24-year coaching veteran, Jackson spent the last five seasons at Miami where she helped the Hurricanes to four straight NCAA Tournament appearances and 109 wins.  Jackson will make Durham, N.C., home for a second time as she spent the 2005-06 and 2006-07 seasons at Duke as an assistant coach, helping the Blue Devils to 63 victories and a trip to the 2006 NCAA championship game.

Overall, Cunningham spent eight seasons at Notre Dame and 11 years at Virginia Commonwealth, including nine as head coach.  During her eight years with the Irish, Cunningham coached seven WNBA First Round Draft selections and nine overall picks.  Cunningham worked alongside Hall of Fame honoree Muffet McGraw and helped lead the Irish to seven straight 30-win seasons.  Notre Dame advanced to the NCAA Final Four in 2013, 2014, 2015, 2018 and 2019 while winning the 2018 National Championship. “Beth’s experience having been a head coach for many years, having been at a top program at Notre Dame, having learned and coached with Muffet McGraw, a Hall of Fame coach, having been at Final Fours, having won a national championship; there is so much she brings to the table for Duke. I think that her experience will be helpful for me in a lot of ways.”

Before returning to Notre Dame in the summer of 2012, Cunningham took the VCU women’s basketball program to new heights in her 11 seasons, spending one year as an assistant coach (2001-02) and another as associate head coach (2002-03) before assuming the head coaching duties prior to the 2003-04 campaign. She is the Rams’ all-time leader in women’s basketball coaching wins, having successfully piloted VCU to a 167-115 (.592) record and postseason appearances in each of her final five seasons, including the program’s first NCAA Tournament berth in 2009. Under her tutelage, VCU also averaged better than 22 wins per season in a five-year stretch from 2008-12, amassing three consecutive 20-win campaigns from 2008-10 including back-to-back school-record 26-win seasons in 2007-08 and 2008-09.

“I couldn’t be more excited about the opportunity to work with Kara at Duke,” said Cunningham.  “She is a winner in every sense of the word. Kara has proven that with everything that she has done. It is just a perfect fit and I am looking forward to the challenge.”

A two-time Virginia Coach of the Year honoree by the Richmond Times-Dispatch, Cunningham coached three WNBA Draft picks and two All-America selections, as well as two Colonial Athletic Association (CAA) Players of the Year and 18 all-conference selections during her tenure at VCU. Among her more notable pupils were Quanitra Hollingsworth, a first round selection (No. 9 overall) in the 2009 WNBA Draft by the Minnesota Lynx, and Courtney Hurt, a 2012 third round selection by the Indiana Fever who was among the nation’s leaders in scoring and rebounding during her final two seasons.

“Everyone at Duke has been incredible,” added Cunningham. “More than anything, I’m grateful for the opportunity and looking forward to working with Kara, Tia, and Winston to build Duke into a championship program.”

Part of the best stretch in Rice women’s basketball history, Gandy helped the Owls to a 72-22 overall record and 42-8 mark in Conference USA action over the last three seasons.  In 2018-19, the Owls won a school single-season record 28 game with an appearance in the NCAA Tournament and the school’s first Conference USA Tournament title. “Winston is a rising star in the profession,” said Lawson. “He’s one of the finest player development coaches in the country; that’s one of his superpowers. Winston is also a very well-rounded coach. He’s coming from academically intense institution as well. So, he understands the type of kids we want to recruit — kids that have big dreams; kids that want to impact the world in a lot of ways and he’s got a great feel for that. He’s also really, really good at building relationships and really, really good in terms of Xs and Os.”

Prior to his coaching stint at Rice, Gandy spent three years as the Coordinator of Player Development for the Washington Wizards.  During his tenure with the Wizards, Gandy worked with a pair of multi-year NBA All-Stars in John Wall (5-time selection) and Bradley Beal (2-time selection) as Washington advanced to the Eastern Conference Semifinals three times. He also served as the Director of Recruiting Operations at the University of Maryland in 2013-14.  In his one season in College Park, the Terrapins went 28-7 and advanced to the NCAA Final Four.

“I am grateful to join the women’s basketball program at Duke,” said Gandy. “I would like to thank Kara and the Duke administration for this incredible opportunity.  Kara has an established background in both winning and leadership.  Kara’s history of basketball is unparalleled as she has had success at all levels. She has worked and played for some basketball’s greatest minds and I look forward to working with Kara as she continues to build her legacy.  I cannot wait to get on campus and work to getting Duke back into the national spotlight.”

Jackson, who has both played and coached in the NCAA Final Four, will return to Durham after helping the Miami Hurricanes to the NCAA Tournament in four of the last five seasons.  This included four straight 20-plus win seasons along with two WNBA Draft selections.  She served as the head coach at Washington from 2007-11.

“Tia is coming back to Durham, and we are clearly excited,” said Lawson.  “She was a part of two of the most successful seasons in Duke history. She spent time at Stanford, she understands what the process is like in terms of recruiting kids that are high achievers in more than one facet of their lives. And that’s what we have at Duke; we have kids who want to be great students and we have kids who want to be great basketball players. Tia has so much experience and she’s great at building relationships. She’s somebody who I’m going to lean on a lot this year to help me with decisions.”

Following the 2010-11 season, Jackson joined the Rutgers coaching staff and helped guide the Scarlet Knights to a trio of postseason appearances, including two trips to the NCAA Tournament. In each of Jackson’s first two years at Rutgers, the Scarlet Knights signed the nation’s No. 3 recruiting class. “There are not many times in college athletics that you get a chance to return to a place that has been really unique and rewarding, especially for me,” said Jackson.  “I am beyond enthusiastic about coming back to Duke.  It has been a place that I have held very near and dear to my heart over the years. To have this second coming and be under the leadership of Kara is even more gratifying.  I am ecstatic.”

In her two seasons at Duke, Jackson helped land the No. 7 recruiting class in 2005 and No. 2 class in 2006.  The Blue Devils won 31 contests in 2006 and advanced to the NCAA National Championship game.  The following season, Duke became just the 14th team in NCAA history to register an undefeated regular season (29-0) and finished the year as the No. 1 ranked team in the final Associated Press poll. Prior to her two-year stint at Duke, Jackson was an assistant coach at UCLA for five seasons, Stanford for one campaign and VCU for three years.

“I have followed Kara’s career for so long, even during her college playing days,” added Jackson.  “I am honored that she even thought enough of me to bring me on board to help her make Duke what it has always been. It has been a pivotal program in the country and people marvel at being here. I am excited about being back with the Duke family.”

“When I look at how individually-talented these coaches are and then I look at what we can be as a group combined together, it makes me excited,” said Lawson.  “But it makes me more excited for our players to be able to work with this staff every day and for our potential future players to see what type of group is going to be guiding them on and off the court throughout their college years. I feel very confident that we are going to give a great experience to young women playing in a Duke uniform.”