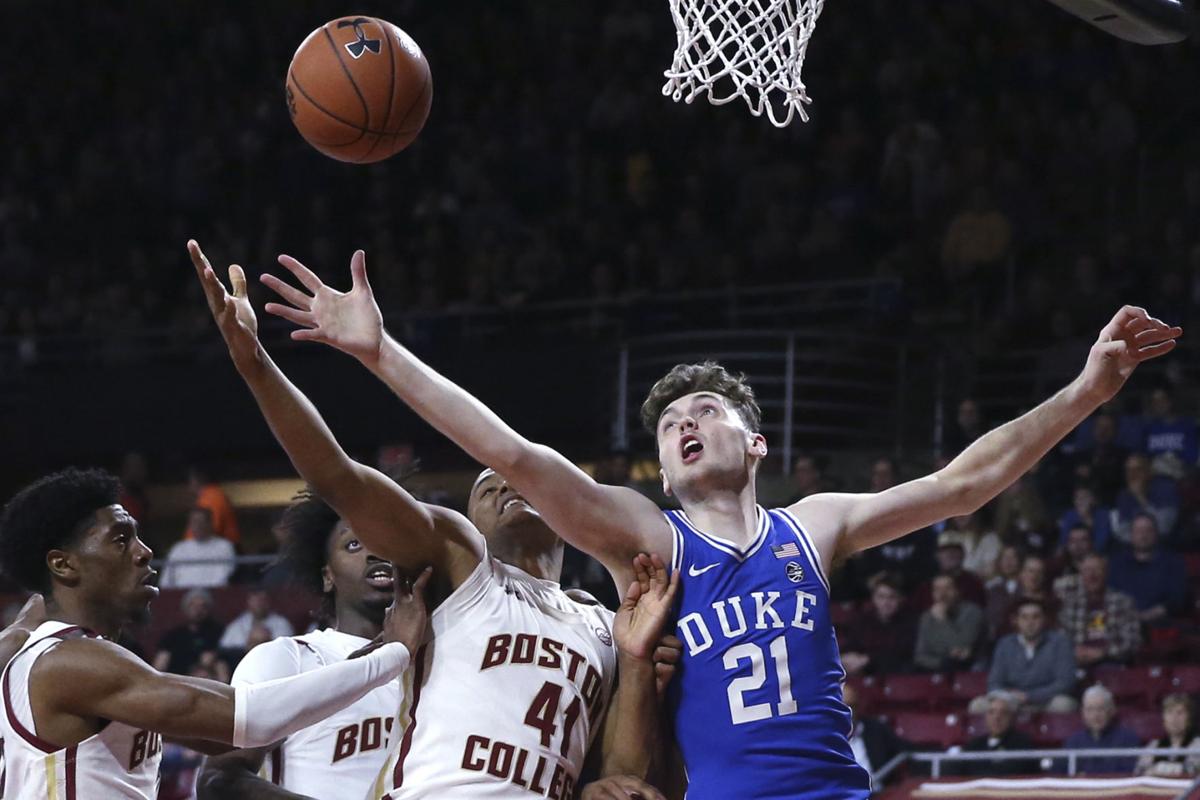 By Brian HoraceFebruary 4, 2020No Comments

Duke spent the entirety of the first half searching for buckets that didn’t materialize. Duke shot only 26.7% from the field and was out rebounded in that first half 23-17 and that led to a Boston College lead of 24-21 at the break. The Blue Devils attempted 12 3-point shots in the first half to no avail.

The second half saw the Blue Devils shoot much better from the field at 48.4%. The Blue Devils tied the game at 24 two minutes into the second half, even taking a 1 point lead a few seconds later. The teams traded leads until around the 6 minute mark where the Blue Devils went on a 10 – 0 run to put the game out of reach. The spark for the Blue Devil came with around 11:37 left in the game when forward Joey Baker, who had seemingly been in the doghouse, was called on to deliver energy and buckets. Baker hit a jumper to tie the game, then completed a 3-point play to tie the score again. A few series later Joey Baker hit Dukes only 3-point shot to trim the Eagles lead at the time to 1 point. Baker would end the game 3-3 from the field, scoring 8 points.

Duke was paced by Tre Jones who come alive late to lead the Blue Devils to the victory. Jones scored 18 points on 7-15 shooting, Jones also dished 4 assists. Vernon Carey Jr., who battled foul trouble in the second half scored 17 points and grabbed 10 rebounds.

The 63 points scored by the Blue Devils was the lowest output of the season. Both teams shot 37% for the game and neither shot above 12% from the 3-point line.

“There was a lot going on tonight. We feel very fortunate to have won. I think that one change (defensively) helped us and it turned out where we won. Whether we were completely deserving of winning or not, I thought in the second half, we at least put ourselves on the threshold of being deserving and we got it.”

On if the defense got the offense going in the last eight minutes: “Yeah. We got a couple steals. We missed six shots by the bucket in the first eight minutes. Even at the end, we missed right by the bucket. When we’re young, we try to shoot there, and when you’re by the bucket, you don’t try to shoot – you try to score. It’s a big difference. [If] you’re trying to shoot [and] there’s the bucket, you might go here. You try to score, you’re going in here, so you’re either going to get the bucket, foul or both. Here [shooting], you’re not going to get a call because you haven’t worked for it. It’s not like we were getting fouled. We were shooting the ball, and what happens then is there’s a lot of stuff underneath body-wise and so if you’re just shooting it, you’re shooting at a moving target because you’re going to be hit, whereas if you’re trying to score, you’re right there. Anyway, it makes sense – I’ve been doing it for 45 years. There’s a big difference between shooting and scoring by the bucket. Winning teams score the ball, they don’t shoot the ball by the bucket, and we didn’t do that tonight until late [when] Tre [Jones] got a couple. Overall, we weren’t as tough as we needed to be and they were really tough.”

On how the young players handled adversity on the road: “They have a lot of adversity with me because they didn’t listen to me, so they’re in trouble with me and that’s the main adversity that they have, because it’s stupid not to listen. I’ve warned them for two days about it. I’ve watched their recent games – they’ve been playing great, not good. This guy’s (BC’s Jim Christian) a good coach, and these kids (BC) played their butts off and I thought they did that even better than what I’ve seen in the last three games. They took it up a notch. They were very good tonight. They were certainly deserving of winning – we were fortunate tonight.”

On the physicality on both sides: “I think because of the athleticism… They weren’t fouling, they were very athletic and played with great energy, so there is going to be physicality, especially because they have so much ball movement so there are bodies crossing and all that. And, they do it well, and the change in [defense] stopped that. It’s good the game didn’t go longer [because] they would’ve countered with it, but it’s a good thing we’re not a pro game and it wasn’t 48 minutes.”