By Brian HoraceJune 4, 2021No Comments 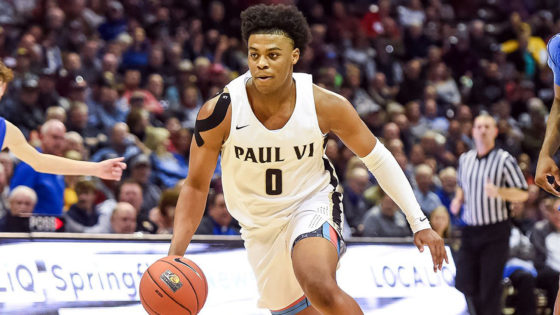 The 6-foot-4, 190-pound senior guard led the Panthers to a 7-4 record this past season. Keels averaged 28.7 points, 9.1 rebounds, 7.2 assists and 3.8 steals per game. A McDonald’s All-American Game invitee, he is ranked as the nation’s No. 19 recruit in the Class of 2021 by ESPN.com. The Washington Catholic Athletic Conference Player of the Year as a sophomore, Keels is a two-time First Team Washington Post All-Met selection. He concluded his prep basketball career with 1,803 points, 632 rebounds and 412 assists.

Keels is a board member of Sharing Shoes, a non-profit organization that provides basketball shoes to children in need. He has volunteered locally as part of community beautification projects at St. Dominic’s Monastery in Linden, Va., and he has donated his time with both the Special Olympics and as a youth basketball coach. “Trevor Keels brings a college-ready body and elite outside shooting skills to the floor,” said Paul Biancardi, ESPN National Recruiting Director. “He can beat opponents with his physicality or his finesse game as he can score behind the arc or finish through contact at the rim. He is a highly competitive player with an impressive basketball IQ.”

Keels has maintained a B-plus average in the classroom. He has signed a National Letter of Intent to play basketball on scholarship at Duke University this fall.

Through Gatorade’s cause marketing platform “Play it Forward,” Keels has the opportunity to award a $1,000 grant to a local or national youth sports organization of their choosing. Keels is also eligible to submit a 30-second video explaining why the organization they chose is deserving of one of twelve $10,000 spotlight grants, which will be announced throughout the year. To date, Gatorade Player of the Year winners’ grants have totaled more than $2.7 million across 1,117 organizations.

Since the program’s inception in 1985, Gatorade Player of the Year award recipients have won hundreds of professional and college championships, and many have also turned into pillars in their communities, becoming coaches, business owners and educators.

To learn more about the Gatorade Player of the Year program, check out past winners or to nominate student-athletes, visit www.playeroftheyear.gatorade.com, on Facebook at www.facebook.com/GatoradePOY or follow us on Twitter at www.twitter.com/Gatorade.