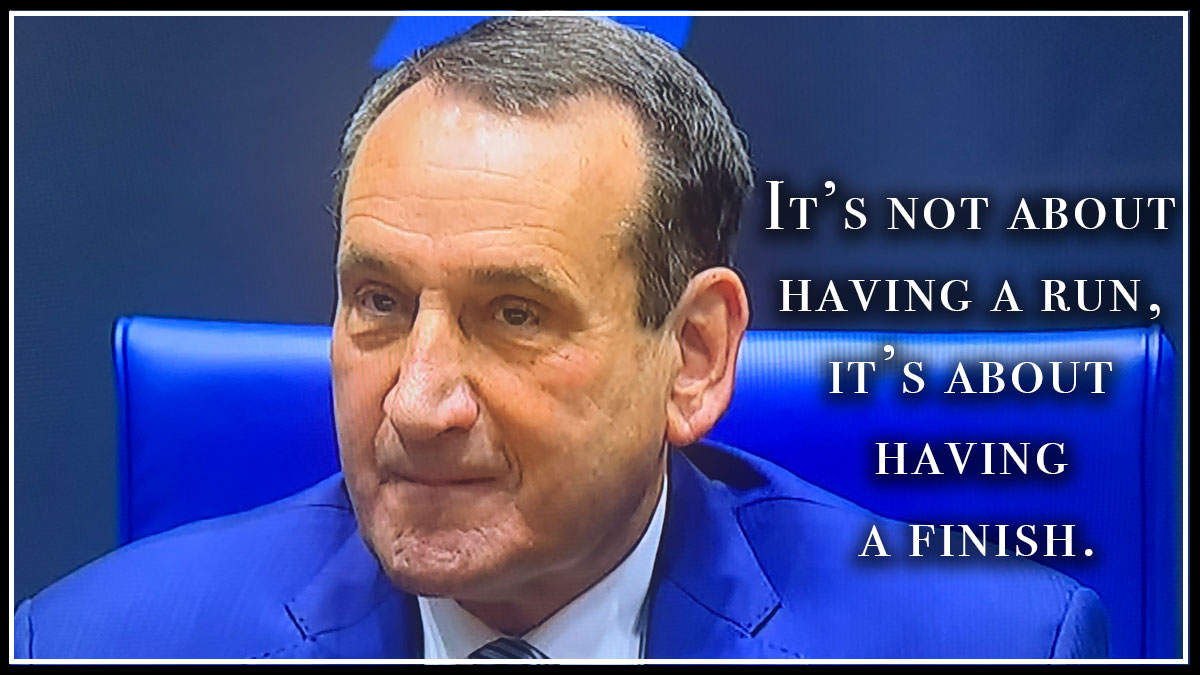 By Brian HoraceJune 3, 2021No Comments

Coach K said in the official Duke release yesterday that this retirement announcement was viewed by he and his family as a celebration, not sure Duke fans would agree necessarily but when 74 year old Coach K entered the press conference dancing to the tune of Cascada’s – Everytime We Touch a staple at Blue Devil home games. Definitely trying to strike a celebratory tone with his family clapping along with the beat in the audience. Not what one expects and after kind, thoughtful and complimentary words by Vince Price, Kevin White and Nina King, Coach K addressed the audience.

There has been a lot of speculation as to the reason why a 74 going on 75 year old coach that has been at his job for over 40 years would want to retire, that’s just the way of the world nowadays. There always has to be some alternative reason other than the obvious. Coach K put those things to rest fairly quickly in Thursdays press conference. Coach K began by saying this is not about having a run but having a finish. As for the timing, Coach K alluded to being transparency with recruiting, his current players and being honest with them and also for the sake of having continuity. Continuity not just in terms of succession but in terms of culture and legacy, knowing that his program will be left in trusted hands, hands that have been affiliated, indoctrinated and have participated in building that legacy. The time was right and Jon Scheyer was an obvious choice. K also said that Scheyer is one of the smartest coaches in the country and that he was in a perfect position to notice that, also mentioned that all of his staff are well versed in how things run and that “everybody does everything here”.

In terms of the reasons why, it became crystal clear that being able to spend time enjoying his family and being able to do all of the things that coaching takes away from you. Coaching is an all encompassing profession and the demands on your time are extreme – being able to stop and smell the roses seems like the transition that Coach is looking for. He mentioned being able to see his guys play, see his guys coaching and living through them. Coach K shot down any concerns about his health and mentioned that both he and his wife Mickie are in good health and that this process of transitioning away from the game has been an ongoing conversation with he and his family for quite a number of years now.

My biggest takeaway in terms of next year is that Coach K plans on not being on the recruiting trail obviously and plans on being laser focused on the team this year, there will be no dividing time and that should be huge dividends for this squad. It’s almost a level of irony that setting up his exit to the game will actually allow him to better focus on making this year one to remember. K seemed to embrace and almost be giddy at the prospects of other teams wanting to beat Duke that much more for his last go around. His demeanor about next year in a word seemed still fiery, ending with a message to the fans, “Come back and let’s see what the hell happens”