Countdown to Craziness Recap: My First Visit to Cameron

By Brian HoraceOctober 27, 2014No Comments

Firstly thank you to everyone I met last night at Countdown to Craziness at Cameron Indoor Stadium last night. It was a very surreal experience being in a state I have never been in, in a place that I’ve been watching from afar since I was a little boy. On top of all of that meeting people who came up to me and either recognized my ugly mug and came up to me to say they appreciate what I do, it was very cool. If I seemed weirded out, well I’m not used to anyone knowing who I am so I apologize for that. It was a great experience to say the least and glad I got to be there, to those of you that go often I hope you don’t take it for granted. I drove 4 hours to sit there and 4 hours back the same day and regretted not a minute of it.

As for the performance it was a great show, one of the differences I will point out is at some schools the midnight madness or opening season scrimmages and the accompanying show often come off like rock concerts. I think Duke did a very good job of making sure not to over do it. While the excitement was evident it came off as a performance by kids, college kids in a college atmosphere. I think that is lost on a lot of schools lately. Duke had performances that were culturally significant, appropriate and fun. The lightshow & court video was awesome.

The other aspect of the Duke scrimmage that separates them from a lot of schools was evident early on. These guys go hard. The coaches and players take these scrimmages seriously. While some schools put on a glorified AAU game Duke plays defense, they dive for loos balls, it’s all effort all the time. There was pushing, holding, tugging, attitude and it was clear to me that the coaches were paying attention and the players even playing against one another still wanted to win and impress. 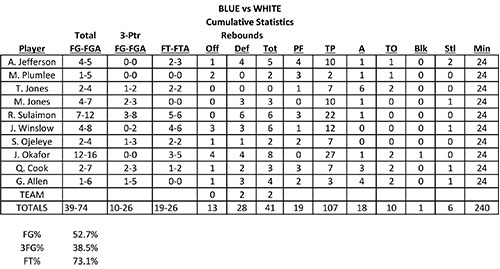 It’s very clear that the Duke Blue Devils has two really good shooters in Quinn Cook and Rasheed Sulaimon and that Sulaimon is probably the best scoring guard on the team.  His defense is much improved and going against freshman Tyus Jones in practice is good for Sheed as well as Jones. Sheed may be the best defender on the team, he looked locked in. Sulaimon also may be Dukes lone slasher, he can get to the rim with ease and gives up his body to get his angle to the rim. It will be very hard to keep him out of the line-up in my opinion.

Quinn Cook’s shoot looked good, there is still some adjustment needed by the senior guard to his new teammates that has to happen but overall he looked pretty good. Cook and Tyus together will be interesting to see. Cook had 3 assists and 7 points on 3 of 7 shooting while Rasheed Sulaimon scored 22 and went 3 of 8 from beyond the arc.

Tyus Jones is a very good floor general, very good, when he brings the ball up-court he sees things that a lot of people will miss. He is an excellent passer whether it be on the break or in the half-court. While some guards excel in one of the other in a half-court set Jones will find the opening, and the seams that develop in a motion offense. He didn’t shoot much but when he did, he looked good. Jones would go 2 of 4 for 7 points and 6 assists.

A much improved sophomore Matt Jones took the court for Duke and if his defensive presence wasn’t enough Jones seems to have found his shot. Jones hit 2 of 3 of this 3 pointers and 4 of 7 overall en route to a 10 point performance. His shot does look a little awkward but Jones shot it with confidence. The phrase I would use to describe Matt Jones, just based off of the scrimmage is “dialed in”.

Grayson Allen showed he may be the second best defender of the freshman, Allen should be able with his size, strength and athleticism defend either guard position. Offensively he is still a work in progress his shot wasn’t falling but Allen should be able to impact a game in other ways. Allen did have 4 assists and a steal in the game.

Freshman, Justise Winslow is a fun player to watch. I have to admit I didn’t know his ball handling was as good he showed in the scrimmage. He’s quick, athletic and gets to a lot of loose balls. Winslow scored 12 points and also pulled down 6 rebounds he also added a steal. Winslow has the ability, like Grayson Allen to knock down those outside shots but I look for him to do most of his damage on stick backs and interior play. It did look as if his shot, like Grayson Allen’s, is a work in progress but he should get plenty of opportunities this year should he play multiple positions. Defensively Winslow is tough and should be able to stay with most guards – it will be interesting if Duke chooses to, at times, play him against small-forwards he may be at a size disadvantage playing defense. Offensively being able to make bigger  players have to guard him on the perimeter may create a mismatch in Duke’s favor.

Amile Jefferson will see a ton of minutes this year and not having to play center will be a plus for the junior. Amile had 2 steals, 10 points and 5 rebounds in the scrimmage. Duke will need Jefferson to get at the glass a little better once the season starts, rebounding was an issue for the Blue Devils last season. In my opinion, and this is just based on this scrimmage, Amile should be a little more aggressive at looking for his shot, teams are going to key on Jahlil Okafor and opportunities for Jefferson may be plenty and his aggressiveness will keep defenses honest. If Jefferson can master the art of the interior pass to Okafor then it could be a very good year for Duke big men. Jefferson is poised to make a huge impact this year on both ends of the floor. His communication skills are the best on the team and exactly what Coach K needs in a leader for his defense to be effective.

Marshall Plumlee has a couple of jobs this season. 1) is to make life hell for Jahlil Okafor. Plumlee made sure to body up the freshman big man and tried unsuccessfully to make life difficult for the Okafor. If Marshall can push Jahlil physically he can prepare the starting center for life in the ACC, teams are going to be very physical and try to make Okafor back down. 2) Marshall will need to spell Okafor as he adjusts to the amount of minutes expected as a college starter. If Plumlee can be solid and a competent rim protector then any offensive deficit with Jahlil on the bench should be negligible. If Plumlee can work on his touch around the rim he could be an effective player inside, he has the physical tools to get open and get shots off but seems to lack a shooters touch on his hook shots and put backs.

Jahlil Okafor is a force, no hyperbole here, I have seen a good amount of his games and film previously but seeing him in person it was better than advertised. He has incredible touch around the rim – something that a lot of college bigs lack, the NBA is going to eat that up. His touch on a layup is just as soft as his touch on a jump-shot. The big man showed a battery of post moves and that he can score the ball whether he is at the rim or 5-10 feet away from it. Okafor scored a cumulative 27 points in the scrimmage and pulled down 8 rebounds and had a blocked shot. The big man did have 1 assist a number that should be higher once the season begins and the double-teams start to collapse, his passes out of the post should open up opportunities for shooters. I expect Jahlil to be vocal in demanding the ball once he’s pinned his defender and I can’t see a possession that he shouldn’t at least get a touch. It will be interesting to see how he handles well established bigs at this level, but Duke does have a good one in Okafor. While it’s expected for some freshman to have a hard time initially finding their role on a new team, especially going from high school to college, I don’t expect to see that issue at all with Jahlil. What separates him from Jabari Parker, another great freshman talent on last years Duke team is that Jahlil has no problem being “that guy”, he will not share the same guilt about being the guy who takes 20 shots a game. He is more or less an animal on the floor and that is something that Duke has lacked and the fans are very much looking forward to.