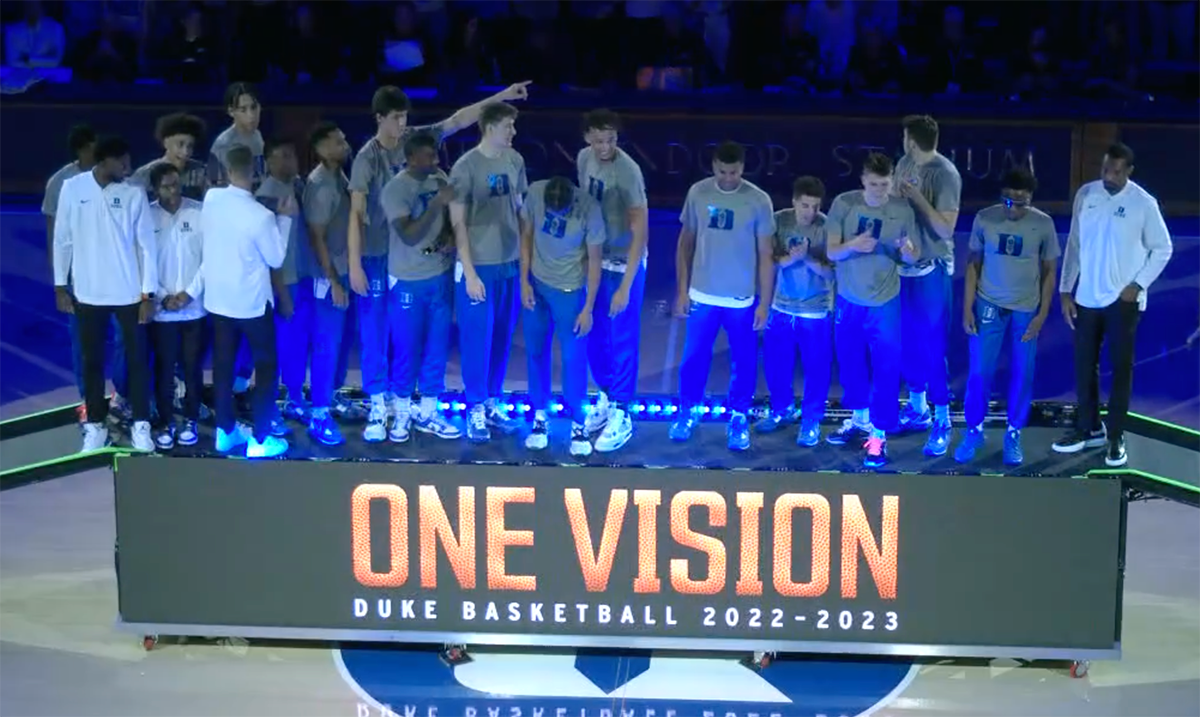 By Brian HoraceOctober 22, 2022No Comments

The highly-anticipated night kicked off with student group and dunk team performances prior to introductions of the Duke women’s basketball program. After warming up the crowd with team introductions, head coach Kara Lawson addressed the Crazies before a three-point contest and half-court shot contest rounded out the women’s session.

Under first-year head coach Jon Scheyer, the men’s team’s took the court next and kept the energy in the building high as each player was introduced. The Blue Devil men then took the court for a 16-minute intrasquad scrimmage, which the Blue squad won 41-26, behind 12 points on 3-of-3 shooting from three-point range from junior Jeremy Roach.

There is only so much one can glean from an intra squad scrimmage and less so when 2 probable starters were hobbled with lingering injuries. As devourers of college basketball and starved for any action we are often overly critical and we over analyze the little bit we get in the preseason. Every piece of footage or action, especially those in the early parts of a season, lead to more questions than answers so I will be as general as I feel it deserves. There were flashes of things that looked really good. Jeremy Roach in takeover mode, Tyrese Proctor electrifying in spurts and the effort put forth by Christian Reeves, Jaylen Blakes and others. There were signs as to how Duke wants to play – fast – and to do that you need a strong backcourt. I think Duke will have that, to me the backcourt was clearly the more further along and once they get a better sense of what their teammates are and what they can do – their tendencies – this could be very fun to watch in ACC season. Christian Reeves was excellent defensively and finished plays on the offensive end but in the end I would still be surprised if he doesn’t redshirt. I think a lot of that will depend on the health of the frontcourt in general. I think Ryan Young will be a solid backup but ACC play may provide some challenges for him. I think he’s up for the task. Lastly I think Mark Mitchell will have some plays that wow the crowd he’s super athletic and plays with some serious confidence – it was nice seeing his motor on display. He could very well be an x-factor. Those are my general takeaways based on very little obviously.

My thoughts on the scrimmage, in a non-overreactionary sense, is that this is a team that will need time to gel. I was neither overjoyed nor was I overly enthusiastic but that’s who I am. A realist. A team of 11 new players and only 1 with player with any discernible “Duke” experience is going to need time and patience and a bit of a longer runway to reach the potential that the staff sees. What some fans don’t see are the investments (both player and staff wise) that new coach Jon Scheyer has made in the years that follow his inaugural year at the helm. With the introduction of these 11 new players are several faces that should be holdovers for next season and hopefully the season after. I hesitate to use words like “rebuild” because I think this team will make their mark and be competitive but it’s realistic to expect stumbling blocks along the way. This is the kind of team and season that will separate the wheat from the chaff among fans especially those fans that hang on only when there is a Blue Devil juggernaut. It’s going to be a challenge for Jon Scheyer the staff as well as the team. But what is a challenge but an opportunity to succeed.

On the overall Countdown to Craziness experience this year: “It was a great experience. Countdown is such an unreal moment. We get to showcase our talents right now in front of the great fans that we have. It was a good experience out there, just to give them a first taste of what we’re going to do this year.”

When asked about heating up midway through the game and starting to hit his shots: “The game was kind of getting a little close, so we had to extend the lead a little bit and keep that cushion.”

On how comfortable he seemed letting the game come to him and not forcing anything: “I think that’s the big thing – for me to get my teammates involved early, giving them confidence early, and then letting my [game] come. Me forcing myself is not really going to do anything, not going to do any good for the rest of the team, so getting my guys involved and giving them confidence early will be a big key for us this season.”

On his first experience with Countdown to Craziness: “It was crazy. The Crazies are something else, the best fans in the country by far. They just bring the energy all-around, all game, and it was something special. I really soaked it all in and had a great time.”

On the transition to Duke: “As soon as I got here, I felt the connection straight away. It’s been great, just meeting everyone and just gelling with everyone.”

When asked if he thought the team was ready to start playing a true opponent instead of against themselves: “It’s been a minute, I’ll tell you what. The guys have been here all summer, and I was playing in Indonesia all summer. They’re ready, I’m ready, and I think Coach [Jon] Scheyer’s ready as well. So we’re all confident and motivated to start playing someone else.”

On his relationship with Jeremy Roach and what it’s like to compete against him but also play alongside him: “Jeremy and I clicked really well as soon as I got here. Him being the point guard last year and taking them to the Final Four is a big thing, and then him just giving me little pointers on and off the court. We’ve been hanging out all the time together, [and I’m] just picking his brain on little things on the court. Training against him every day is a blessing. He’s one of the best guards in the country, so going against him and playing with him is even better. He’s a really good guy, and he can pass the ball, he can score, he can do everything.” 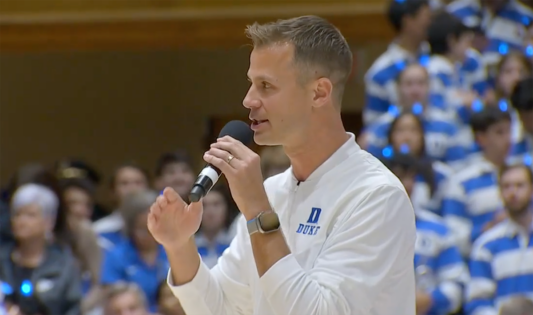 Opening Statement: “For me, it was a really special night to kick off the season. It started last night for me when I was driving home and I got a call from Debbie [Savarino] and she told me you need to get over here, we have about 500 kids here and spent some time with them. Just to see Cameron, right. We haven’t been here for a while and to see Cameron the way that it was; our students were incredible. They were in there for a few hours, but they packed it and I think for our guys, just to get a feel of what it’s like playing here… We have 11 players, two of them didn’t play tonight, but we have 11 players that haven’t experienced that, so I think that’s a big thing for us. Obviously, this should be a big advantage for us playing here, so, especially tonight. Thought the game was really good overall. There’s a lot we have to work on. We’re still coming together as a team. I think for our guys, we’re tired of playing against each other. It’s time we start playing against some other people. We have some work to do before that happens, but really excited about this group, how they’ve handled themselves. The preparation leading up to this point and now we get to start playing against other people, so, it’s exciting to think about that.”

On status of injuries: “Yeah, we are being really cautious with both of those guys. Dariq [Whitehead] is really progressing well. I think you can see by both of their dance moves they’re doing just fine. They are moving along here, but Dariq is still a few weeks away and really we don’t want to get ahead of setting exactly when he’s going to be back because there’s still some steps he has to make, but he’s doing great. He’s back on the floor. He’s able to shoot; he’s able to handle the ball and I think that’s picked up his spirits being able to do some of that. And then Dereck, his – more week-to-week – is a calf strain. Being really cautious with him. Again, you could really see with his dancing, I mean he’s good, but we want to be really smart and both of them have bright futures ahead. We have a long season so we’re not trying to rush them back here for practice or for one game, so we’ll take it step by step with each of those guys.”

On the improvement of Jaylen Blakes and his role on the team: 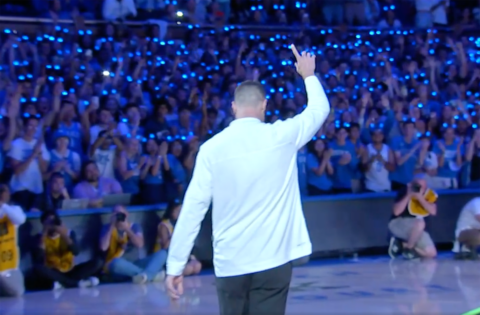 “Jaylen works his butt off. He can really defend. Thought he did a good job tonight making everybody run, and he’s tough to keep out of the paint. I think you saw that attacking the basket and his decision making again creating for others he’s been great. He’s been great to coach. You can coach him hard and I just want to mention his work ethic again. He works his tail off so really proud of him and the jump that he’s made. We’re really going to need him. We’re going to need everybody but with Jaylen he can play a big role for us with his energy, his defense. The play that he made going to offensive boards tonight. I am not surprised he was able to get one of those and translates into offense. His first basket today, it wasn’t a basket but the free throw. That’s a big play for the team.”

Are you expecting Christian Reeves to redshirt?: “Anything’s on the table for us right now. Proud of what he did. Christian, he has a couple sequences there protecting the basket and then running the floor. You don’t know many 7’1” guys that can do that and the growth that he’s made since stepping on campus to now has been incredible. He’s kept his head down. He goes against Ryan Young and Dereck Lively every day and for us with being a little short-handed, we need to evaluate everything. And so we’ll work with Christian and his family on that to decide what’s best. But proud of how he played tonight and he’s been showing flashes in practice but to see him put it together in a moment like this in front of our fans in Cameron that’s a big deal.”