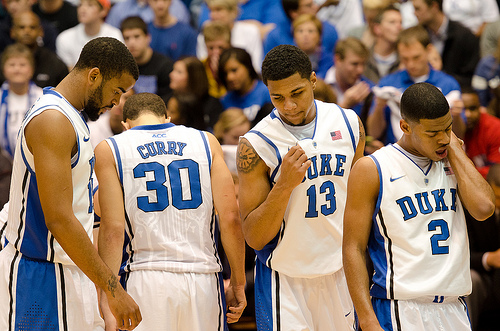 It was clear by the way the Devils ended the regular season that there were clearly more questions than answers for this team. One question was whether the bench could help fuel Duke to the championship game with Ryan Kelly shelved. In a word no. Florida State used the holes in Dukes offense and defense to grind out a victory in the ACC Tourney and get themselves into the final game with UNC.

Despite the poor performance by Duke they remained in the game with chance after chance to take the lead and keep the lead but the usual sloppiness and mental mistakes that plagued Duke throughout the season were back. Defensive lapses, an unwillingness to block out, unforced errors and not finishing plays were the Achilles heel for this team.

In addition to Dukes poor shooting from the field Duke was out-rebounded and out-assisted and out-hustled for most of the game. Offensively Duke had never been able to fully put it together this season from the outside and the inside. Once again Dukes guards were unable to get shots over Florida States defense. Dukes bigs were also inept and anemic on offense, unable to finish plays around the rim with neither Plumlee getting double figures in scoring on a day when Duke needed points in the paint desperately. Duke does not seem to be a team prepared for March or playing with the urgency that this time of year requires.

33 games into the season and Duke has not seen significant progress on either end of the court. One could argue that this team has regressed. If Duke does not find an answer for its deficiencies and quickly this season could be one more game long.

The 3 point line has not been kind to this team as of late, 5 for 20 is not going to get it done against anyone with a lack of inside presence to counteract a bad shooting night.

Points in the paint was a strong suit for this team early in the year and now it seems as if the bigs are unable to finish. Mason Plumlee has seemed languid and unable to get lift inside. Missing lay-ups instead of dunking the ball. The Duke guards seem incapable or unwilling to put Mason and Miles in adequate scoring situations.

Turnovers to the tune of 16 is an un-Duke like stat, most were avoidable and more because of a lack of concentration than defensive pressure.

The season is not over.

This is basically a young team and lessons learned this season will hopefully fuel the underclassmen to put a premium on defense in the future.