By Brian HoraceMarch 16, 2014No Comments

Duke outlasted a tired but stalwart North Carolina State Wolfpack in the ACC Semifinal 75-67. The ACC’s most prolific scorers went toe to toe and put in a show for the fans in Greensboro and when the final buzzer sounded only 1 point separated the ACC POY and the ACC ROY. Jabari Parker would lead Duke with 20 points and T.J. Warren would lead N.C. State with 21.

Duke seemed to be a completely different team that barely crawled by Clemson just a day ago, this Duke team was much more stout on defense, and showed a lot more fight. Not to say that Duke got a lot of stops, but at least in the first half, State hit some very difficult shots. N.C. State shot a blistering 66.7% in the first half against Duke while Duke shot 50%. Despite Duke shooting nearly 17 percentage points lower that N.C. State they would lead at the half by 1 point.

On the other side of the aisle the Wolfpack played Duke 180 degrees differently than in their first meeting. The first meeting between these teams saw N.C. State turn the ball over 21 times to a mere 7 this go around. The difference in both halves was 3 point shooting. Duke would go 7 for 17 in the game from beyond the arc while State would only go 2 for 14. The difference in points from 3 would be a 21 to 6 advantage for Duke.

Duke would do a much better job of maintaining their lead in the second half against a State team that would not go away. Duke got a huge lift off of the bench from junior Quinn Cook when they needed a third scorer to step up, Cook would score 14 points and go 3 of 4 from 3 point range and also dish 3 assists.

Duke got 14 from red shirt sophomore Rodney Hood who drew the assignment for most of the game of keeping T.J. Warren off of the scoreboard (hardest job in the ACC). Hood performed admirably along with several other defenders and kept T.J. under control, yes Warren is so good that 21 is under control.

Next up is the championship game against Virginia on Sunday. 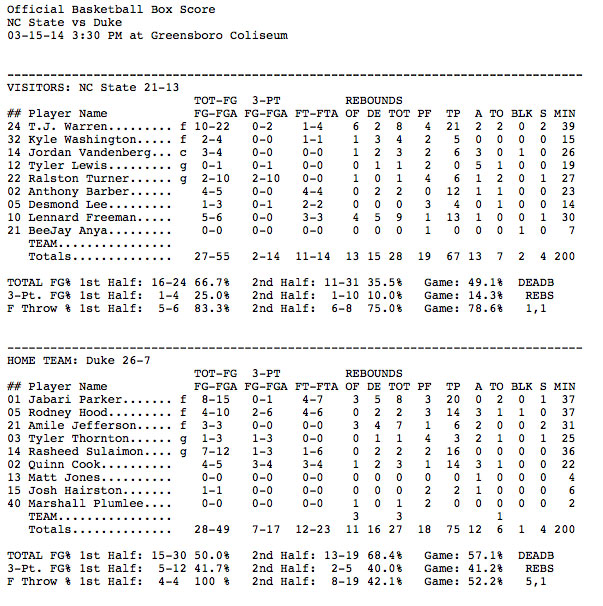