By Brian HoraceJanuary 12, 2015No Comments

For the first time this year the Blue Devils looked lost. Overwhelmed. This sort of complete dismantling seems to happen to Duke in recent years at least once or twice a season. Full credit to N.C. State they brought the thunder and completely took it to Duke in ways that higher ranked and more lauded opponents haven’t.

I am not much of a trend person but one that has been hard to ignore has been a lack of intensity from this team. Winning tends to hide a lot and this team has been winning by a lot and it has hidden a lack of a defensive presence as well as focus and toughness. It seems, at least to me, that this team can get away with going through the motions on most nights but until those things that they are coached become second nature, become habits it’s hard for them to be deliberate.
State outworked and out hustled Duke in ways the stat sheet may not indicate. They were quicker to the ball, they played looser, they played as if their season was on the line. I don’t think Coach K has been able to get that type of effort from this team since the holidays. It’s hard to pinpoint quite why, but luckily for me it isn’t my job to have to.
I don’t think anyone had and illusions of this team being a defensive juggernaut but I’m not sure I’ve seen so many blown assignments in a game before. It’s clear that if this team forgets to do the little things they are just as vulnerable as any team out there. As Kentucky showed in its two overtime victories the margin for error, even for the best team in the nation, is not very much. Unlike Duke, Kentucky was able to hang its hat on defense and push forward. Duke was able to get a 19 point deficit down to 8 but a lack of fundamentals in the waning minutes all but assured that it was all for naught.
There will be quite a bit for the Durham brain trust to draw from and very little of it will be X’s and O’s, it will most likely be heart, fight, toughness and ownership.
The numbers for Duke weren’t great, shot a horrid 26% from 3 point range, and only 37% overall, credit some of that to great NC State defense some to awful execution on offense. I would hate to see the numbers offensively without Jahlil Okafor going 8 of 11.
For State, well they shot the lights out shooting consistently from 3 point range in both halves at 62.5%, an amazing stat that coupled with crushing Duke in the paint 26 to 40 was too much to overcome. 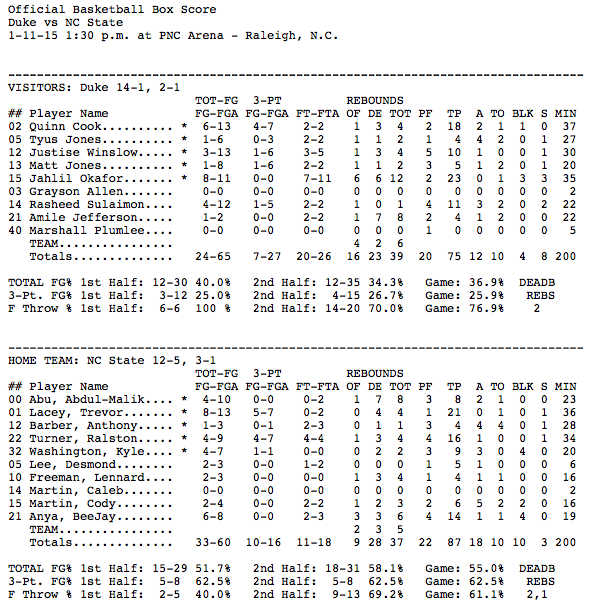