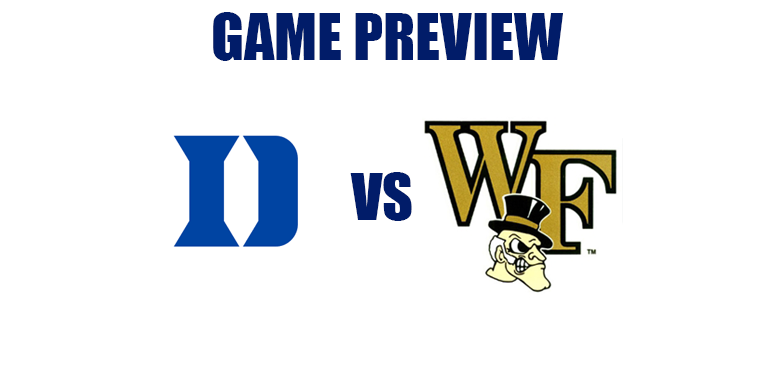 By Randy DunsonFebruary 17, 2017No Comments

No. 12 Duke is riding a six-game winning streak as it hosts Wake Forest on Saturday. The Blue Devils are looking to get to double-digit ACC wins for the 10th year in a row.

Duke has utilized the same starting lineup in five of the six games in its winning streak. The lone exception was against Pitt, when Frank Jackson started for a hobbled Matt Jones. The Blue Devils have used nine different starting lineups this season with no combination starting more than seven games together.

Led by Luke Kennard (19.8), Duke is one of three major-conference teams with three players averaging at 15.0+ points (also Arizona State and UCLA).

Duke leads the ACC with an average of 9.0 three-pointers per game in league play. Duke is shooting .441 from deep during its six-game winning streak, making 10.5 per game.

Wake Forest visits Duke Saturday in search of its seventh ACC win of the season, a mark it has not reached since going 9-7 in the league in 2009-10.

A victory Saturday would give the Deacs three ACC road wins for the first time since 2008-09. It would also secure the program’s first winning regular season since 2013-14.

Wake Forest suffered a 95-83 loss at Clemson on Tuesday. John Collins scored a career-high 29 points and had 10 rebounds for his 12th double-double. Bryant Crawford had 25 points as the Deacs had a pair of 25-point scorers for the first time since Ish Smith and Al-Farouq Aminu vs. Xavier in 2010.

Mike Krzyzewski took a unique approach to coaching after No. 12 Duke went into halftime trailing No. 14 Virginia 25-21.

It might best be described as getting out of the way.

Moving away from called offensive plays and to a system that highlights the Blue Devils’ individual abilities, Krzyzewski’s shrewd move freed up freshman Jayson Tatum for a spectacular second half, and he led Duke to its sixth consecutive victory, 65-55, on Wednesday night.

“We were just trying to move the ball and give them the opportunity to be basketball players, which they are,” Krzyzewski said.

None benefited more than Tatum, who scored 21 of his 28 points after halftime, and three times made 3-pointers with the shot clock racing toward 0:00. All three of the clock-beating shots came after Virginia had pulled within 43-42 with 8:33 left. The last made it 54-44.

“That was a big-time performance,” Krzyzewski said, laughing. “I mean, jiminy Christmas. It’s why we won for crying out loud.”

Luke Kennard added 16 points for the Blue Devils (21-5, 9-4 Atlantic Coast Conference), who are tied for second in the league with Florida State and Louisville. All three are a game behind No. 10 North Carolina, which beat North Carolina State 97-73 earlier Wednesday.

Tatum came into the game just 19 for 60 from beyond the arc, but was 6 for 7 against the Cavaliers and 8 for 12 overall.

The loss was Virginia’s fourth in six games. In all four games, the opponent shot 50 percent or better after halftime.

Virginia trailed 43-37 before Perrantes made two free throws and Kyle Guy had a 3-pointer, making it 43-42 with 8:33 remaining. However, Tatum hit the first of his three clock-beating 3-pointers, Kennard scored in the lane and two more 3s for Tatum put Duke ahead 54-44.

“Every time we needed a stop, they put a dagger in us with a late shot clock or a deep 3,” coach Tony Bennett said.

Collins shot 12-of-14 from the field and a perfect 5-for-5 from the free throw line in the career performance. The 29 points also mark his ninth consecutive 20-point game, the longest streak in the ACC this season and the most by a Deac since Skip Brown had a 10-game streak in 1974-75.

In addition to the career high, Collins pulled down 10 rebounds for his 12th double-double and his fifth 20-point, 10-rebound conference game of the season.

Bryant Crawford was one point shy of a matching a career high with 25 points, his 18th consecutive double figure game.

The last time two Demon Deacons recorded 25 points apiece was on Jan. 3, 2010 when Ish Smith totaled 28 and Al-Farouq Aminu finished with 26 against Xavier.

Crawford put the Deacs (15-11, 6-8 ACC) on the board early with a layup. The squads then traded baskets until a triple from Marcquise Reed gave Clemson (14-11, 4-9 ACC) its first lead of the night. However, the Deacs managed a 5-0 run while holding the Tigers scoreless for over two minutes to gain a 14-10 lead with 13:23 remaining in the half. Wake Forest held on to the lead until a 6-for-6 streak from the Tigers gave Clemson a six-point advantage with 7:55 to go. The Deacs managed to cut Clemson’s lead to one with just over seven minutes left in the half but the Tigers went on a 12-2 run to take a 39-28 lead, forcing Wake Forest into a timeout. After the break, Clemson extended its lead to 14 and took a 46-32 lead into halftime.

The Tigers jumped out on an 8-2 run to gain a 20-point advantage early in the second half. The Deacs slowly chipped away at Clemson’s lead throughout the half and managed a 7-0 run to bring the score within nine with 5:50 remaining in the contest. Clemson pulled away by double digits again but the Deacs stayed tough and brought the score within six with just over a minute remaining, 87-81. However, the Tigers sealed the game at the free throw line, going 8-for-8 in the final minute to finish with the 95-83 victory.

Duke leads the series 168-78 (Duke leads 48-39 at Wake and 15-11 at LJVM Coliseum). The Blue Devils have won the last four meetings, including both last season. The Deacs’ last win over the Blue Devils was a home 82-72 win in 2013-14. Wake was 3-0 against Duke in 1995, the last time they faced a Blue Devil team led by an interim coach, highlighted by Randolph Childress’s 40-point game in the 1995 ACC quarterfinals. The Deacs are looking for their first win at Cameron since 1997 (lost last 17 in Durham)

Note the stats in bold. They show drastic differences between teams in these categories. For example, while both teams shoot the ball well (Duke much better), Duke holds their opponents to only 67.5 PPG while Wake is ranked at 263, 76.7 PPG.

Another glaring difference is in each team’s 3PT FG% & opponent’s 3PT FG%.

[If you wish to learn more about how the four factors are calculated and implemented, a description can always be found here, https://www.dukeblogger.com/four-factors-winning/.] [D-1 Average in parentheses.]

Duke leads the way in each factor, most notably in offensive rebounding & getting to the line.

Things are not looking good for Wake Forest at 6-8 in the ACC, although their strong RPI (38) keeps them in the conversation and on the bubble. They were thrashed by Clemson on Tuesday, 95-83 on the road and have now lost two of their last three games. They lost an earlier meeting on Jan. 28 at home (85-83), so they could really use a road win to boost their hopes. No. 12 Duke is in the NCAA Tournament as usual and now they are hitting their stride, having won six straight games. That includes a 65-55 win over No. 14 Virginia on the road on Wednesday.

Wake Forest has wins over NC State twice, Georgia Tech, Boston College twice, and Miami-Florida at home. However, they have yet to get that key win this season. On Tuesday, the Demon Deacons were led by John Collins (29 points, 10 rebounds, 12-14 FG) and Bryant Crawford (25 points), but could not get the job done on the road from Clemson, S.C. The Demon Deacs were behind by 14 points at the half and could not sustain much because they turned the ball over 18 times. They also could not stop the Tigers’ offense (50.9% FG) and did a poor job defending the three-point line (10-of-19). They allowed 95 points to a mediocre Clemson team that had not scored that much in an ACC game in seven seasons under coach Brad Brownell.

Duke has had all sorts of drama this year. Injuries to key freshmen, the actions of Grayson Allen on the court and the one month of absence of head coach Mike Krzyzewski due to back surgery has kept this team out of the ACC picture-until now. The Blue Devils are just one game behind the Tar Heels and tired with Florida State and Louisville for second place. On Wednesday night, they scored just 21 points at the half against one of the nation’s top defenses in Charlottesville, but scored 44 in the second half to beat the Virginia Cavaliers by 10 points (65-55). Freshman Jayson Tatum was sensational for the Blue Devils, scoring 28 points on 8-of-13 shooting. He was the only Duke player who had a strong offensive game. Allen (2-10 FG, 5PTS) and Luke Kennard (16 PTS, 3-9 FG), both struggled from the field. The Blue Devils shot 45.2 percent from the field and 9-of-19 from the 3-point line, but held the Cavs to just 36.8 percent from field in one of their best defensive efforts of the season.

With only a handful of games left in the regular season to move up in the standings both Wake and Duke have the chance to make some moves. At 6 and 8 in the conference Wake could very well still play themselves into the NCAA Tourney but it starts now and they need a win at Cameron to start that train rolling.

Duke is trying to catch the Tar Heels to claim the number one spot in the ACC and it looks like it will be a photo finish. Duke needs UVA to work their way out of their funk as well as a victory against Wake to get there. The opportunity is there for Duke to at very least keep pace and go for 7 in a row. Moreover for this Blue Devil team it is about continuity and keeping the ball rolling and working in their bench players. Harry Giles, Frank Jackson, and Marques Bolden all made significant contributions in Dukes last few games and each needs to take another step forward in the remaining games for Duke to have a legit shot at an ACC and perhaps an NCAA title this year.

From a bookie’s view, Wake Forest has covered eight of the last 11 in this series. The Demon Deacons have the size to not only stay with Duke on the boards, but outrebound them. That will be enough to keep them in this game. As well as Duke is playing, they have only covered three of their last seven games.

This should be a good battle at Cameron Indoor Stadium, between a hot Duke team and desperate Wake Forest squad. Duke has too much talent and they are playing their best basketball. Look for Collins to have a big game for Wake Forest but it will not be enough. Allen should have a nice bounceback game in a convincing Duke win, 85-70.