Duke Breaks Through Against the Boston College Eagles | 89-68

By Brian HoraceFebruary 8, 2014No Comments

Duke Breaks Through Against the Boston College Eagles | 89-68

Duke’s defense in the first half was not very good.  Its offense had moments, but the lack of defensive intensity allowed Boston College to stay close to the Devils, who would muster only a 4-point lead at the half.  Duke would need every bit of Jabari Parker’s 10 first half points.  Duke allowed open three after open  in the first half, and that led to BC guards driving the lane and either getting foul shot opportunities.  BC would go 5-for-10 on three pointers in the first half and 6-of-8 from the free throw line.  Some early foul trouble for Rasheed Sulaimon, who once again started for Quinn Cook, paved the way for Cook to get some first half time at the point, scoring 6 points on the first half in what was indeed a bounce back game for the junior.  Cook would score 21 for the game and also dish 3 assists.  A welcomed sign for the Devils before heading over to Chapel Hill next week.

It was clear that if Duke buckled down and played grittier defense that they could run away with this game and they did that.  Duke would give up only 33 points to BC in the second half while scoring 50 of its own.  Duke would continue to run its offense through Jabari Parker, who would score a career-high 29 points, scoring on pos-ups and in transition, choosing to use his size advantage over guards and his skill advantage over the BC bigs.  Parker would also pull down a career-high 16 rebounds for Duke.  Hearing chants of “Andrew Wiggins” from the crowd, Parker would show why NBA scouts clamored to the Conte Forum to see the freshman play.  Parker’s 12-17 shooting showed that he is choosing his shots more wisely and taking his game to the middle and the mid-range where he can put more pressure on the defense.

Coach K would say of Parker’s performance: “Jabari was really difficult to handle for anyone tonight,” Krzyzewski said. “We just tried to give him some different looks. He got quite a bit in transition.”

Steve Donahue would say: “I’ve seen him a lot growing up. I think the thing you don’t realize on tape is, he has an extra pop. It’s 6-8, 235 (pounds). It’s an extra quickness that you don’t see even in this league, and extra explosiveness.”

More important to Duke would be the game of Quinn Cook mentioned earlier.  His 21 points were integral to Duke being able to pull away from BC.  When Duke’s offense would stagnate, it was Cook who hit big shots with a waning shot clock to keep Duke in the black against the Eagles.

As expected, Duke would win the rebounding battle against Boston College 37 to 23, on the strength of Parker’s 16, but not to be missed was Rodney Hood’s 5 rebounds to go along with his 9 points, and 6 boards from Amile Jefferson who scored 8 points in the contest.  Duke also got good numbers from Rasheed Sulaimon in the assist column.  Rasheed would give Duke 6 assists to go along with his 10 points.  Tyler Thornton matched Sulaimon’s 6 assists and scored 6 points off of 2 three pointers in the game. Duke would use a second half run and its advantage on the offensive glass (12-7) and 2nd chance points (22 to  7) to put BC away 89-68.

Overall, Duke would shoot 52% from beyond the arc and 56% overall.  Defensively, the Devils would limit the Eagles to 11 assists and they would block 5 shots, 3 of which were by freshman Jabari Parker.  The law of averages would catch up with BC, who shot 50% from three in the first but only 28% in the second half while Duke would increase its percentage from 50 to 56%.

Another good sign for Duke was getting 8 solid minutes from Semi Ojeleye, while Semi did not fill the stat sheet, he allowed for starters to rest with Marshall Plumlee being out for this game. Hopefully this shows that Semi is doing and performing at a level that will get the freshmen some shine. 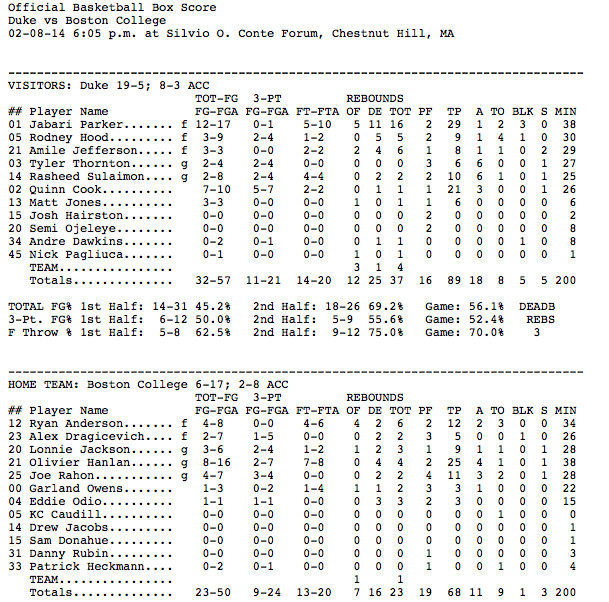