By Brian HoraceMarch 29, 2015No Comments

Yessir!! Not only are the Blue Devils still dancing but they are now the 4th member of the  final four. Duke takes down the mighty Gonzaga Bulldogs in the the South Regional final 66 to 52. It was as Coach K said, at the half, a game or runs. Duke built an 11 point lead in the first half, the Zags battled back to get it to 1. The Blue Devils then went on a run to build a 5 point halftime lead, then after the half the Zags quickly erased that lead before taking the lead and Duke on some hero shooting by Matt Jones and hero defense by Justise Winslow took the lead for good.

Underrated was the defense Duke played against a team with similar offensive numbers and prowess. Holding a talented Zags team to 52 points is not an easy task. Duke forced the Zags into 20% shooting from beyond the arc while shooting 42% themselves. Statistically this game was closer than the final score indicates with Duke losing the rebounding battle 35-31 and subsequently the battle for second chance points went to Gonzaga 15 to 9. Gonzaga also ruled the paint with a 40 to 24 edge versus the Blue Devils. The story of the game for Duke was playing an excellent floor game – The Devils only turned the ball over 3  times and one of those was committed on a shot clock violation with only seconds left in the game. Gonzaga, however, turned the ball over 13 times, which in any normal game is not atrocious but when they lead to an advantage for Duke in points off of turnovers 17 to 2 then they are deadly.

Matt Jones was a hero for Duke in this game as he did his best Matt Dunleavy impersonation hitting 4 three pointers at critical times to keep Duke in front of the surging Zags. Jones ended the night with 16 points, 3 steals and no turnovers. Justice Winslow also had a big game for the Devils scoring 16 and pulling down 5 boards. Winslow did not shoot well but did hit 2 of 4 from beyond the arc and 6 out of 6 from the free throw line.

Tyus Jones had been lacking aggressiveness but turned it on in this game when Duke needed it the most. Jones scored 15 and also dished out 6 assists, Jones also hit on 4 of 4 from the free throw line. Jones’ backcourt mate didn’t have his best game but scored 10 points but did so on 2 of 10 shooting. Cook did hit on 5 of 6 from the foul line.

Duke has had trouble getting the ball to big man Jahlil Okafor. Okafor scored only 9 in the game but did pull down 8 rebounds. Next up for Duke is Michigan State, a team that Duke beat earlier in the year.

It’s been a great ride so far this year and now a FINAL FOUR, it’s a good day to be a Devil. 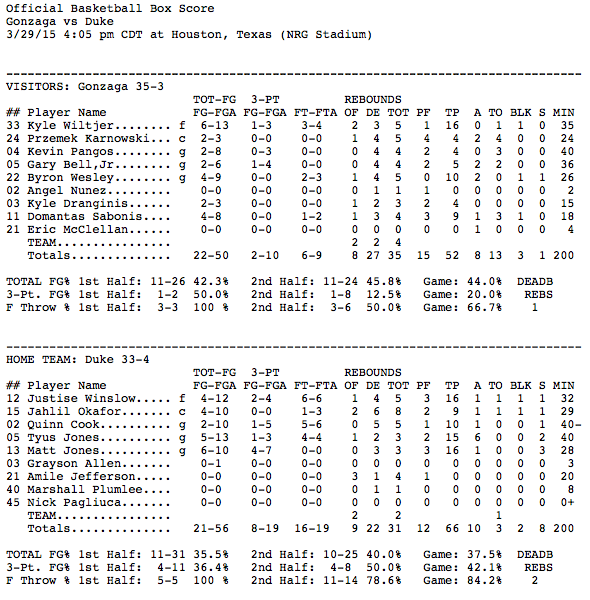