By Brian HoraceNovember 5, 2014No Comments
[dropcap]F[/dropcap]inally folks, finally – no, not the mid-term elections – who gives a crap about that. Duke basketball baby. Duke had it’s first exhibition game against the Livingstone Blue Bears and we can finally say the season is here. This is the first actually glimpse at the new look Devils against someone not sharing a locker room. Clearly Livingstone came into this one over-matched but it was a good day for Duke fans to get a sense of what they can expect from their Blue Devils this year. It’s a good time for coaches to get a sense of habits and tendencies and also to read body language. Even though there was no adversity for the players to really overcome there are things that coaches look for in terms of process and practice that they will use going forward to determine what they can expect from the players. If you don’t follow process when things go well, how can you be expected to when things break down?

Duke would come out in this game and attack, attack and attack the Blue Bears as expected but what was unexpected were the hockey style line changes (not something expected to see once the actual season starts). The starting lineup Coach K and staff chose to begin this exhibition season with consisted of Tyus Jones, Matt Jones, Justise Winslow, Amile Jefferson and Jahlil Okafor. In the first half when Coach K would go to his bench he would bring in an entirely fresh group in led by Quinn Cook, Rasheed Sulaimon, Grayson Allen, Semi Ojeleye and Marshall Plumlee.

Going by last year Matt Jones in the starting lineup looks like an odd occurrence but if you’ve paid attention to practices and what has been happening in this pre-season the writing has been on the wall for the sophomore to get the nod based on his play and practice thus far.

Of course the game got out of hand pretty quickly with Duke winning 115-58. There are things we can glean from this game in terms of style and role and while I highly doubt Coach K will actually go 10 deep in most games it will be interesting to follow along and see if the second unit production is worthy of forcing Coach K to go deeper than he is known for. 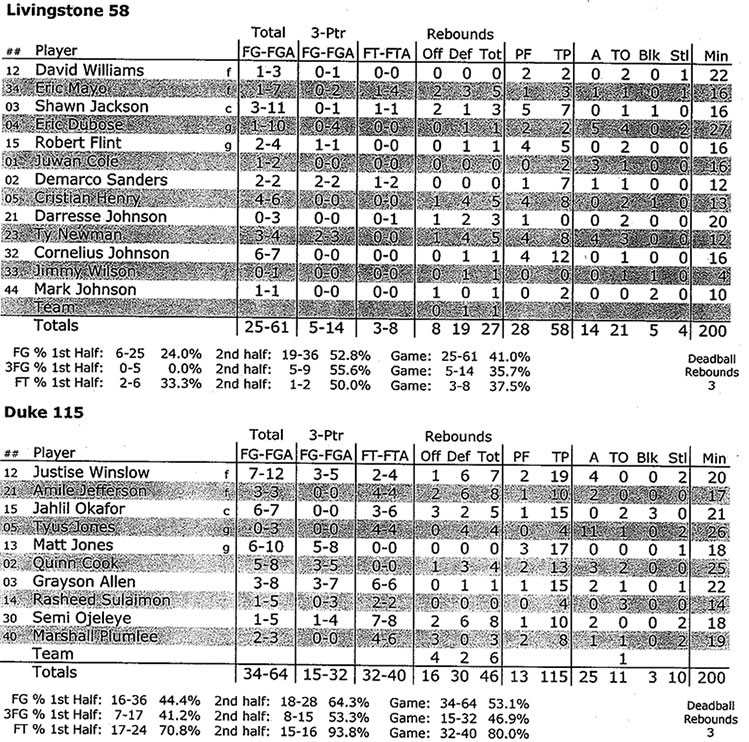 I’m not certain anyone expected Duke to shoot as well as they did (53.1% for the game) but just looking at the numbers isn’t enough. Duke got a lot of open looks, some of that is due to not being guarded very enthusiastically and some of it was excellent floor spacing. What does jump out at you about this team is the willingness to make the extra pass, something that can easily get lost in a game such as this where the talent level disparity is so great. I’m also not certain anyone expected Justise Winslow to be the leading scorer and shot taker. If the freshman, who hit on 7 of 12 – including 3 of 5 from long range, can hit that type of percentage against quality opponents Duke is sitting pretty. Although it was sort of like target practice it was good to see points out of the small forward spot for Duke. Interestingly enough Coach K would utilize the freshman much like a swiss army knife having him move from the 3 to the 4 depending the lineup which shows in his overall stat-line of 7 rebounds, 4 assists, 2 steals and 19 points.

Matt Jones in what some are calling his redemption or resurgence tour hit on 5 of 8 from long range and 6 of 10 overall. His 5 three point makes are 2 more than he had all of last year. Being able to relax and rely on his defense as his calling card seems to have the sophomore in a very confident place. He looks intense yet a lot more relaxed on the court.

Freshman Tyus Jones did not disappoint in this game and while he didn’t make a shot still managed to make the game his with 11 assists and only 1 turnover. There is no pressure on Tyus to have to score this year but the freshman did his job, didn’t force anything made the smart play and didn’t seem nervous or anxious. The freshman does a great job of knowing and using angles and finds seams in the defense, making it look easy.

Jahlil Okafor had as quiet a 15 point, 5 rebound, 3 block performance as you can have but he was efficient going 6-7. With Duke being open and subsequently taking so many outside shots the big man didn’t get the amount of looks he may have in a regular season game. Jah did run the floor well but Duke will look for the freshman to improve on his rebounding prowess going into the season.

The player who looks to benefit the most from Duke having a true low-post presence offensively and defensively is Amile Jefferson. The junior forward should get a lot of looks this year if Okafor is double teamed as expected. Okafor is an excellent passer and Jefferson will need to stay aware and be ready to receive a dump off from the freshman or to collect a rebound off of a miss. Jefferson scored 10 and had 2 assists and 8 rebounds in 17 minutes of action and looked like the quarterback of the defense with his moving guys into position either verbally or physically.

Quinn Cook came out in this game and lead the 2nd unit and performed very well against Livingstone. Cook had 3 assists to 2 turnovers but overall shot the ball well and with confidence. Cook would go 5-8 overall and 3 of 5 from 3 point range and for those watching closely he did, in the second half play alongside Tyus Jones in the back-court in what was a three guard set that included Rasheed Sulaimon. When Rasheed came out of the game for some erratic stretches Justise Winslow would shift to the perimeter for a different look.

Grayson Allen came in as the least heralded member of Duke’s freshman class. Allen went 3 of 8 from the field and 6 out of 6 from the free throw line. The freshman also had 2 assists and a steal but what was most impressive about he freshman guard is that he plays with such a chip on his shoulder. He may be Duke’s most scrappiest player and the edge that Duke was missing last year may be what they find in Grayson Allen. Allen ended the game with 15 points even though he hit only 3 shots.

Rasheed Sulaimon did not have his best game, and some will try to harp on the fact that he only played 14 minutes but he did have some stretches where he forced the ball offensively which lead to bad possessions. Just as we shouldn’t get too hyped on how well Duke looked we also need to take in stride a bad performance. Guys are still finding out their roles and anyone can have an off night. We will see if it effects Rasheed going forward but he has been through a lot and is a player that can be a very important one for Coach K this year. He is too good a shooter to go 1 of 5, and a smarter player than his 3 turnovers and no assists showed last night – look for him to rebound from this game.

Semi Ojeleye, who Duke fans have only seen sparingly in his sojourn at Duke so far played 18 minutes against Livingstone. Semi, like Winslow will most likely both play inside as well as outside this year. Duke primarily used Ojeleye, who is the strongest player on the team, at the 4 position. Ojeleye did pull down 8 rebounds and scored 10 points. Semi didn’t shoot particularly well but did go 7-8 from the free throw line and had 2 steals and 2 assists.

Marshall Plumlee filled his role perfectly against Livingstone, hustling and making plays to keep balls alive. Plumlee pulled down only 3 rebounds, but also had 2 steals and 8 points. Plumlee also hit 4 of 6 from the free throw line.

Some things to remember is that this was an exhibition game against a Division II school, not a bad team but obviously not up to the caliber of team Duke will face during the season. There are some things that we can take from this in terms of style of play, Duke will look to attack and press teams, picking up full-court seems to be something that Duke will utilize. It’s a team that differs from last years team, Duke should be able to get points in the paint with regularity which should open things up from everywhere else on the court. Duke has a team of willing passers and guys that are looking for the win rather than the glory. There is still the question of playing a full game as intensely as the first half is played. While it is human nature to lax on defense when you are up by 50 points, it’s something that I am sure will be addressed in the film room. The second half of the game began sloppy for Duke despite having 3 guards in the lineup so as good as everything looked there are things to look at, and to work on.