By Brian HoraceJanuary 31, 2015No Comments

Wow what a game, what an ending. Somehow, some way this Duke team, despite the distractions, despite being a team of inconsistency, managed to walk out of John Paul Jones Arena in Charlottesville the winner, 69-63. In the first half, Duke was able to get in front of the Cavaliers by pushing the pace and getting out on the break, not letting UVA set up its lauded defense. Duke was paced in the first half by freshman Justise Winslow, who lately has been gutting his way through nagging shoulder and rib injuries.  He had 11 first half points on his way to a 15 point performance. Duke’s 9 point advantage dwindled to just 1 by the time the first half buzzer sounded.

Once the second half started, UVA did what they normally do: they took over the game. Slowly, methodically building and carving up the Blue Devil defense until the lead grew to 11 points (which in UVA speak is 20). Each time Duke would cut into the UVA lead, the Cavaliers stepped up and hit big shots to ensure breathing room.

Then it happened. The guards on this Blue Devil team took the reins. Tyus Jones with an old fashioned 3 point play, Matt Jones hit a crucial lay-up and a 3 pointer. Quinn Cook hit two huge 3’s late. Then with the game all but secured, Tyus Jones stepped up and hit a 3 to put the game out of reach for the Cavailiers.

Photo of Tyus Jones leaving the stadium after the game tonight: pic.twitter.com/qNOSh6eraW

Tyus Jones finished with a team high 17 points and dished out 4 assists to only 1 turnover. Jones hit the ice with 9.9 seconds left, cementing a 16-5 run for the Blue Devils to end the game. Duke also got huge shots from senior Quinn Cook, who scored 15 on 6 of 10 shooting. And while Jahlil Okafor had a frustrating night due to the aggressive double teams UVA employed, the big man still finished with 10 points and 9 rebounds. UVA did force the freshmen into 5 turnovers in the game.

Duke becomes the first team to shoot over 50% against this UVA team and, while Duke hasn’t played great defensively this season for stretches, the Cavaliers only shot 41.3% from the field and 23.1% from beyond the arc. 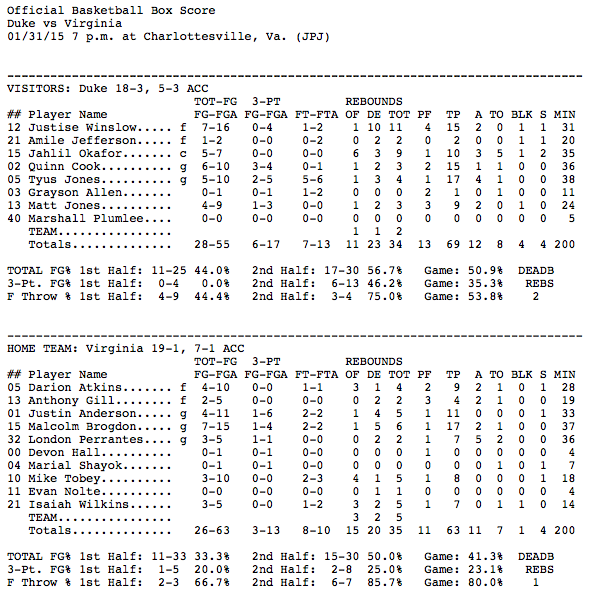