The Duke Blue Devils hang on to defeat the Virgina Tech Hokies 91-86 in overtime. Behind a huge 30 point effort from gimpy freshman Jahlil Okafor and a 26 point performance by senior Quinn Cook the Devils were able to hang and eventually overtake the Hokies.

Defensively, Duke struggled to defend the hot shooting Hokies who shot a red hot 53.4% for the game and in a rare stat, Virginia Tech shot better from 3 point range than they did from 2-point range going 12 out of 22 for the game. Duke was extremely vulnerable off the bounce and Buzz Williams gameplay of drive and kick to open shooters worked like a charm. Not only did the Hokies lead at the half but pushed a 2 point lead to 8 in the opening minutes of the second half. Duke seemed to revert to the matador defense of old after having several games where they seemed to have turned the corner on defense.

Coach K would offer thoughts on the lackluster performance on defense (“So it’s not like you’re going against each other real hard. We’re in it for the long haul, and you have to do those things, but you’re going to get slippage. We had it, and then their offense was better than our defense.”)but some things are just a matter of habit and Duke will need to re-evaluate in the homestretch of the season to ensure post-season success. Duke would switch defenses a multitude of times in the second half, using a 2-3 then a 3-2 zone to erase the 8 point lead the Hokies built, then eventually switching back to man. Virginia Tech was sped up by the Duke defense and Duke was finally able to get transition buckets, a stat which they only held a 13 to 8 advantage in but in a game this close it was huge. Duke with it’s huge size advantage took advantage in points in the paint winning that battle by 18, but curiously only a 5 point advantage on the boards against the much smaller Hokies.

Offensively Jahlil Okafor was unguardable, tying a career high 30 points in the game despite leaving 5 of his 9 foul shot attempts off the mark, several in the waning seconds of the game causing Coach K to make offense for defense substitutions in the late stages of the game. The amazing thing about Okafors offensive game against the Hokies is that he did it on limited practice and still shot an unbelievable percentage going 13-18 from the floor and pulling down 9 rebounds. Tyus Jones did not have a huge night in terms of points for Duke but did manage to pour in 9 assists to 3 turnovers to go with his 7 points, the freshman usually does a very good job of getting himself to the free-throw line to add to this point total but did not shoot a free throw in the game. Duke also managed to exploit a match-up utilizing the size of Justise Winslow, having him post up and back his man down for easy shots in the lane. Winslow also got some opportunities on the break and scored 15 for Duke and pulled down 7 rebounds.

Okafor may have scored more points in the game but as usual for Duke Quinn Cook came up clutch, scoring 26 points including 7 of Duke’s 14 points in the overtime. Cook was Duke’s best shooter from beyond the arc going 6-11 from distance and playing the entire 45 minutes of the game. The rest of the Devils were 4 of 12 from distance.

Duke allowed 5 double figure scorers in the game and two other players were a basket away from also scoring at that clip. Leading the Hokies was Jalen Hudson who lit Duke up for 23 points going 3 of 4 from range and 9 of 20 overall. Also notable for Virginia Tech, guard Devil Wilson dished 11 assists to 3 turnovers in 38 minutes of play.

As much as most pundits, fans and myself harped on Duke and their lack of defensive intensity a lot of credit does need to go to Virginia Tech and the gutsy performance of their squad as well as a very well laid out plan by Coach Buzz Williams. Anyone who has watched the Hokies play this year knows that Williams, even in a rebuilding year, is beginning something special and they’ve been in a lot of games where a play or two has cost them – they may not yet be ACC elite in terms of talent or record but by no means should they be considered, or any ACC team for that matter be considered an easy out. The stars nearly aligned for a huge program win for Buzz Williams but not tonight. 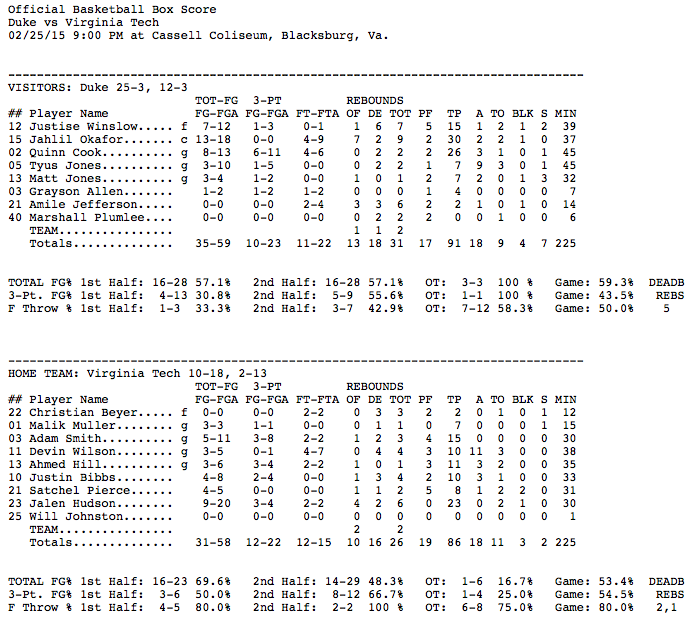