By Brian HoraceJanuary 28, 2015No Comments

Ok Duke fans lets take a deep breath, yes Duke lost to Notre Dame (a top ten team mind you) 77-73. It’s the story of a team that won the turnover battle, won the rebounding battle, had more steals and yet lost…that happens when you leave 10 points at the free throw line.

If anyone thought that this team was going to steamroll the ACC well you were mistaken. We do have a lot of talent, fitting those pieces in with what we already had has been an issue, and an issue I will have confidence that Coach K can fix. Remember everything the freshman are going through, they are going through for the first times. Justise Winslow is dealing with nagging injuries, Tyus Jones has been playing well and has been more assertive, Okafor has been dominant at times but as defenses adjust he may well struggle more and his free throw shooting woes are a serious problems right now. We have to hope that time will heal those wounds. I believe in worrying once there is a need to worry.

Defensively (broken record) Duke was not great but the Irish also hit some very good and big shots. Not many people are stopping Jerian Grant, there is a reason why he’s in the running for ACC POY, to say Duke defended him poorly is to denigrate the fact that this guy is highly skilled and just a horrid match-up for Duke. Duke can look to free throw shooting especially in the last few minutes of the game. Jahlil Okafor had a monster game (22 points & 17 rebounds) but left critical points at the line at a critical time. This is a problem, and one that has to be addressed or Hack-an-Ok will be a thing. Shooting 50% for the game on free throws is horrid and is a stat that is happening far too much for this team. It literally is the difference between winning and losing.

Another stat that is disheartening was the bench points. Duke only managed 5 points off the bench, this is a problem. It just isn’t good enough, especially when that bench is made up of players that have been in this program for more than a year.

I’m not gonna curb my enthusiasm about this team because I love the individual pieces, what I will do is curb my natural Duke fan instinct for winning every game by 20 points and never losing.

Let’s make a pact to get behind this team win, lose or draw and enjoy the ride. I’m all for calling a spade a spade but lets give them room to grow….not calling out anyone because I am just as guilty of it. 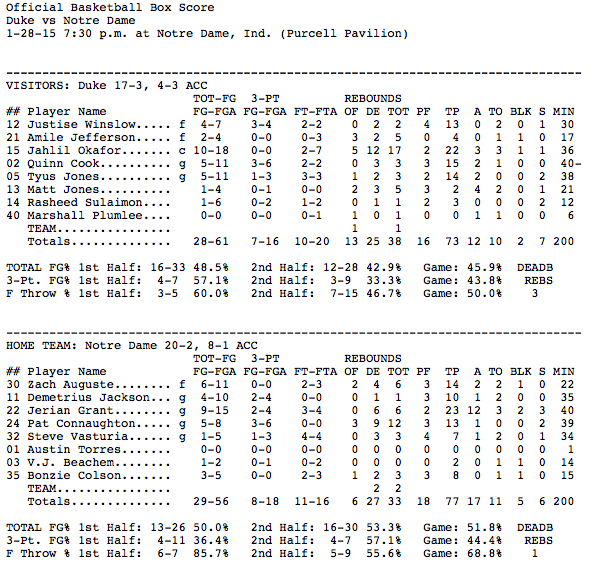