By Brian HoraceJanuary 18, 2014No Comments

The Dukies took care of business today and dispatched of North Carolina State  95-60. The game was never really in doubt, mostly because Duke put together its best defensive effort of the year. Duke did what Duke teams are supposed to do, they forced turnovers and converted them into points. They made more free throws than State shot and shot them at a higher percentage.

The first half Duke struggled to pull away early mostly because of unforced errors and the rebounding advantage NC State had over Duke (23-15 in the first half). Duke would keep the lead on the strength of its 3 point shooting as they managed a 18-3 lead in points from beyond the arc. Also in Dukes favor were points off of turnovers. Duke would score 23 points off of 15 NC State turnovers for a 23-2 edge.  Duke would finally push the lead to 13 at the half.

Duke was paced by Jabari Parker in the first half who would score 14 of his 23 in the first stanza in only 14 first half minutes. Parker seemed to be a different player choosing to get good looks from close, and being fed off the drive by Duke guards. Parker would only attempt a single 3 point shot in the first half which leads me to believe that his shot selection may have been called into question. Parker also went 7 or 10 from free throw line in the first half  – the entire NC State team was only 3 of 6 in the first.

Duke would add to its lead in the second half with pressure defense, even picking up State full court most of the game. It seems as if the staff paid particular attention to the things that Duke did not do well in the first half, and there weren’t many, once the second half began Duke was energized. Duke would turn a rebounding deficit (8) into a positive in the second, out-rebounding State by 3 in the game. Duke would also turn a 2 point deficit in points in the paint into an a 4 point advantage by games end. In the end Duke would pressure NC State into 21 turnovers in the game and turn those into 33 points.

For State, TJ Warren scored a team high 23 points but did so on 19 shots, Duke contained the most dynamic scorer in the ACC and shut the rest of the team down completely. No other player scored in double figures for State and they only had 6 assists for the entire game.

Jabari Parker as mentioned earlier scored 23 for the game and also pulled down 7 rebounds, Parker hit both 3 point shot attempts he took and ended the day shooting 50% from the field and 70% from the foul line. Parker looked a lot more energetic and engaged on both ends of the floor and even had 3 steals for Duke.

Joining Jabari Parker in double figure scoring would be Rodney Hood (11), Quinn Cook (10), Rasheed Sulaimon (13) and Andre Dawkins (11). Rodney Hood was not a volume shooter but played much improved defensively and had 3 steals for the Devils to go along with his 11 points.

Coach K chose to go deep into his bench getting every player minutes at critical times. Marshall Plumlee and Semi Ojeleye got 13 and 6 minutes respectively and Matt Jones once again started for Duke and would score 4 points and play 17 minutes.

Duke completely took State apart in the second half dropping 50 points and holding the Pack to only 28. Dukes defense seem to get stronger as the game progressed this in addition to an electrified and animated head coach are great signs for Duke going forward.
A huge win for Duke in terms of confidence and standings, today is a good day to be a Dukie. 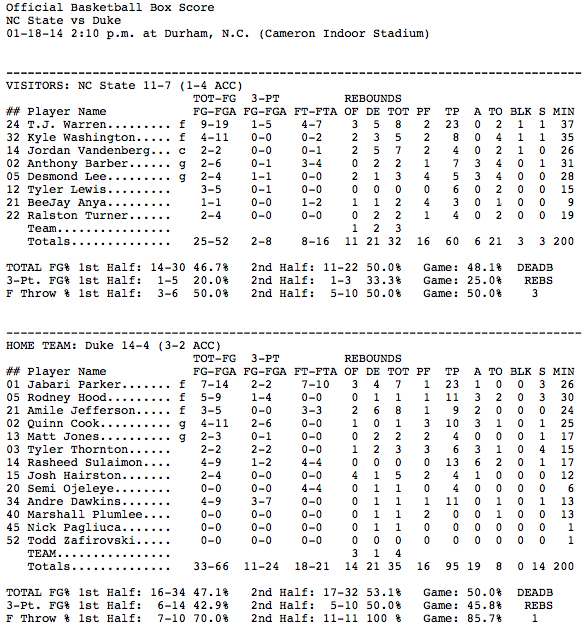