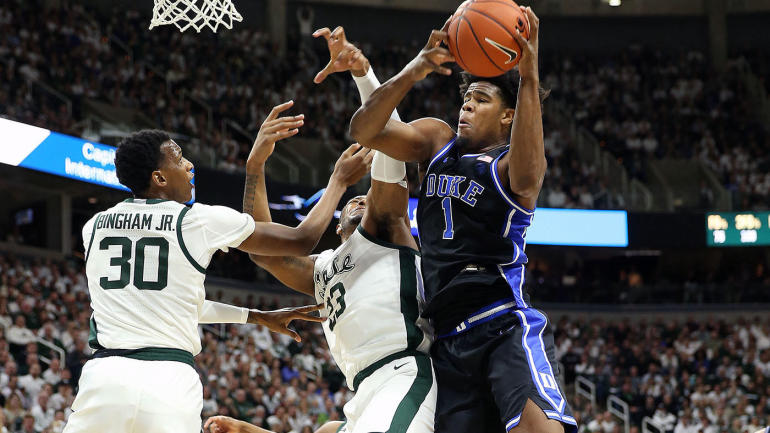 By Brian HoraceDecember 4, 2019No Comments

The Duke Blue Devils will probably play the entire rest of the season with the specter of Stephen F. Austin on their backs but Tuesday night they Devils put on a show at the Breslin Center. Duke came in with a mission and to that end – they took care of business beating a tough Michigan State team 87-75. The Spartans should have known they were in trouble early when Tre Jones took a steal the length of the court that ended with his foot on the chest of an MSU defender who was flat on his back. The Blue Devils kept the weight on the Spartans chest the entire night.

The Blue Devils, after a couple of games in a row where the defense was in a word…lacking, turned it on in East Lansing stealing the ball 10 times from the Spartans and blocking 11 shots as a team. Offensively the Blue Devils did what they do best and fed big man Vernon Carey Jr. who would lead the Blue Devils in both scoring (26) and rebounds (11). Carey notched his 7th straight double-double and more importantly went 9 of 12 from the free throw line.

Tre Jones admitted that this game was a bit personal and that he came in with a chip on his shoulder. Jones delivered with 12 assists and added 20 points. Jones carved up the MSU defense and continually put his teammates in positions to score throughout the night. Jones and company were able to hold player of the year candidate Cassius Winston to just 4-14 shooting in the game although Winston did have 7 assists.

The Blue Devils were boosted by a huge effort from the bench in this game, notably Javin DeLaurier and Joey Baker. Baker provided the Devils with 11 points on 5-6 shooting in 17 minutes. DeLaurier scored 10 points on 5-5 shooting in 19 minutes and added 2 steals and 6 rebounds.