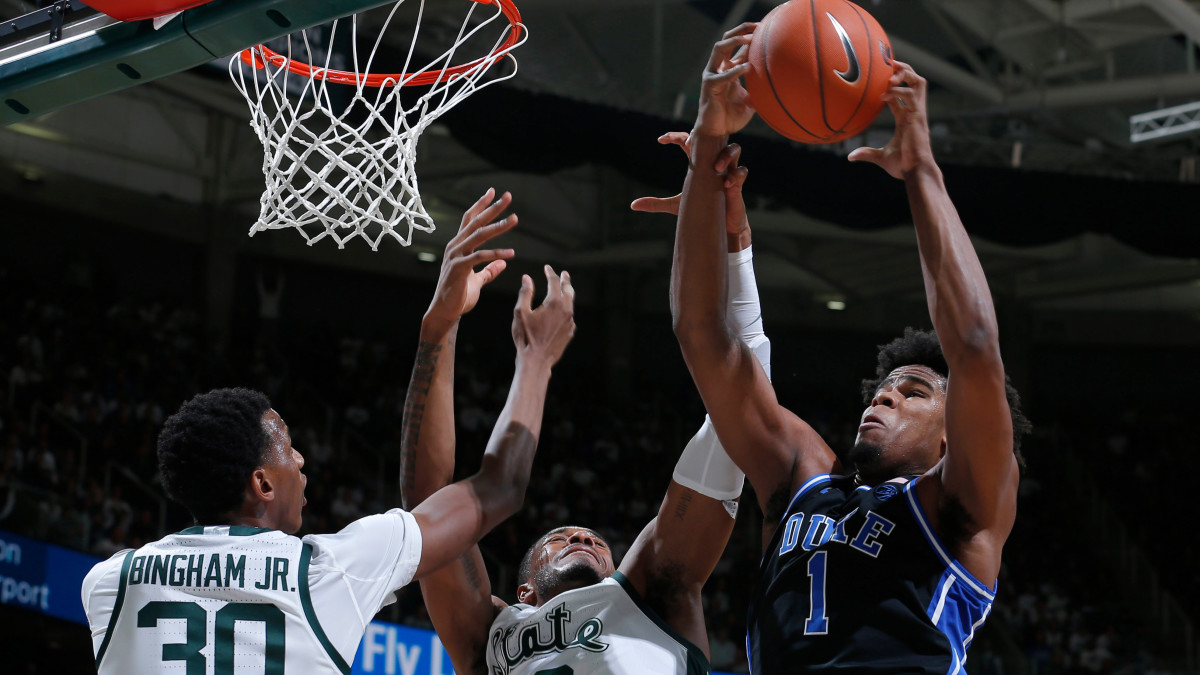 By Brian HoraceDecember 4, 2019No Comments

We played so hard and we needed to, to beat them. The crowd was great. Tom’s teams are so good, and this team really advances the ball probably as fast as anyone in the country, and so overall, I thought we did a good job of getting back. Actually, we had a lot more fast break points than I could ever have imagined in this game and so much of that had to do with Tre (Jones) and how our big guys ran the court, especially Javin (DeLaurier). Javin had not played to the level he is capable until tonight. He was a difference maker for us. I thought our big guys did a very good job. Yeah, we won a tough game.

On becoming a top five team…

This is a huge win, but that doesn’t mean you’ve arrived. We are placed in a very difficult situation, our conference put us in a situation where we will get back at 4 in the morning and literally, we are in the toughest week of our academic year, the week before exams. Two of our kids took tests last night here and now we got to go back and in the next day, Thursday, we fly to Blacksburg (Virginia). It is really not a good scheduling thing by our conference, and we will see how our guys react. Obviously, we are real pleased with a win and now we got to put that behind us very quickly.

On the veterans playing a big part in the game…

It is a good point and Joey has just worked every day. He comes to work everyday and every time he is put in the game, he’s done well. In our last game against Winthrop, they are very good, they could be an NCAA team. Joey (Baker) and Jordan Goldwire were the difference and Jack (White) has been just solid. I think he had a couple blocks and three steals, and he had a big three, so everyone contributed. We needed to; they are a very deep team. The foul trouble that we had, especially in the first half, kind of can mess you up a little bit and they hit us with that run right away and I thought our kids really did a great job after the timeout of regaining poise and get control of the game.

He played a great game. Our guys look for him and the key for him is he is 9-for-12 from the free throw line and he missed a couple on the break. He could’ve had over 30 in this game and our guys look for him, but really for a freshman, especially for a big guy, to have that poise in the post is commendable.

On Vernon Carey’s big play in blocking shot after screen…

Then I had to sub him because he was gassed. He is not just a big guy, he’s a basketball player. He has really good lateral movement but playing at this pace, you get tired so the subbing that we did were for all of our big because Jack was on the perimeter and big. It helped a lot.

On what he saw from his team defensively…

We had blocked shots and got some turnovers. We didn’t go into the game thinking we’re going to block as many shots or get the steals. Our guys were really tough in making an extra play. Like you were beaten, the team was beaten, but then we weren’t. We had probably about eight plays like that where there could’ve been scores for them and our kids just made that extra play. That was superb. That’s not coaching; that’s what I mean, the competitiveness that they had. They got beat and then they still recovered, which saved the game for us. Saved the game for us, no question.

On his message to the team before big games like this…

I just tell them, if you want to sing your song, you want to sing it in front of a big audience. You not only come into our program, but you’re coming to Michigan State’s program wanting to play in these type of environments. I didn’t know how our kids would respond. You can want and then all of a sudden you get and it can go sideways, but tonight, they wanted, they got and they responded. Cool thing; I’m proud of them for doing that.

On the friendship between him and Coach Izzo, and calling him a couple weeks ago…

I admire the heck out of him and Michigan State’s program. We have two of the best programs in sport, not just in basketball. We have it because of the values and the standards, the principles that he evokes and we do too. And it started with Jud (Heathcote), too. I mean, Michigan State is the crème de la crème and we are too. There’s not one. When you are that, you have ultimate respect for the guy leading the other group. I know he has that for me and I have that for him. Consistent excellence is not easily achieved and Michigan State has had consistent excellence because of Tom and his amazing staff. I mean, his staff has been together for a long time and the support. Their former players are like our former players. They feel like they are part of a family. And Tom – what is this, his 25th year? He’s a young whipper-snapper (laughing). 40 (points to himself). When you have that continuity, then those players come back and there’s family. Not many programs – hardly any programs have that. They do and we do; we’re two of them. That’s why we’re very, very close.

On the difference between last week and this win tonight:

“The way our team has come together. The loss last week can be really bad for teams. We know it’s early on in the year and we have a lot of growing to do. We came together as a team and the coaches helped us learn but also pushed us in ways we didn’t know we could be pushed. We came together as a team and came out on Friday last week, got the win under our belts and started preparing for this game knowing we had to be a tough team and play together.”

On the coaching staff pushing the team:

“The way we fight for Duke. The name, the university, everything that has built Duke basketball. Coach has been there to build it all. He’s been through it all and he reminded us of what that is. We talk about being a tough team and a defensive-minded team, and that’s the type of things that build Duke basketball. We had to refocus on that and get back to work.”

On the message to the freshmen following the victory on the road:

“They all responded as well as you could expect, especially with it being our first true road game. It’s going to be loud, it’s going to be hostile and we did a good job of eliminating their crowd from the beginning by playing hard and taking control of the game. The second half, they came out and hit us with a couple punches, but we did a good job of responding. The freshmen played amazing tonight.”

On the rematch against Michigan State:

“Obviously when a team beats you in the tournament and ends your season, it’s the game you think about the most working towards next year. It feels good to come and beat a really good team. It feels a little sweeter because they did beat us last year in the Elite Eight.”

• The Blue Devils have won eight straight in the Challenge.

• Tonight’s game was the 16th all-time meeting between Duke and Michigan State, with series now 14-2 favoring the Blue Devils.

• In the ACC/Big Ten Challenge, Duke and Michigan State have met five times, with the Blue Devils winning each of the five, including two at MSU’s Breslin Center.

• Duke had five players in double-figure points, marking the seventh time in nine games this season that the Blue Devils had four or more reach double-digits.

• Duke extended its streak of at least one made three-pointer to 1,068 games – the nation’s third-longest active streak.

• Duke is now 2-0 versus ranked teams this season, with wins over No. 2 Kansas and No. 11 Michigan State.

• Freshman Vernon Carey Jr., recorded his seventh consecutive double-double with 26 points and 11 rebounds, including 9-of-12 from the foul line.

• Each of Carey’s double-doubles have been 15-10 efforts, which is tied for the third-longest streak of 15-10 games in Duke history, and the longest since a seven-game streak by Marvin Bagley III two years ago.

• Sophomore Tre Jones recorded his second double-double in the last three games with 20 points and 12 assists. He also had three steals and played all 40 minutes.

• Duke is now 23-2 in Jones’ career when he scores in double figures.

• Sophomore Joey Baker scored 11 points off the bench on 5-of-6 shooting from the floor. It marked his second straight game in double-figures after a career-high 16 versus Winthrop.

• Freshman Matthew Hurt scored 10 points and his three blocks were a career high.

• Senior Javin DeLaurier scored 10 points on 5-of-5 shooting with six rebounds, two steals, one block and one assist in 19 minutes off the bench.