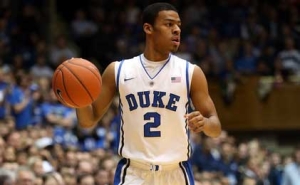 Going back and watching Duke overpower Gardner-Webb 85-66, I wasn’t as critical as I was watching it live. Although there were defensive lapses and a few unforced errors, it wasn’t a bad performance by a team with such a long lay-off and dealing with the rigors of academia at a top-flight university – Rust is expected, and normal. The intensity on defense was there in spurts, just not a sustained effort throughout the game. Quinn Cook, who had a tremendous first half for Duke going for 11 points, 9 assists and only 1 turnover in the half on his way to 16, 9 assists and 4 turnovers for the game, noted that Duke has a tendency to take the foot off the gas when they acquire a lead on teams. That lack of a true killer instinct or knock out punch is something Duke is going to need to find and develop come ACC season in preparation for March.

Duke got a strong effort off the bench for senior guard Andre Dawkins. Dawkins shot was pure and he went 6-10 from the floor for 18 points earning 22 minutes of playing time. If Dawkins can improve his defense, which is better from two years ago, but still needs work, it will be difficult to keep him off the floor. Dawkins is also learning to use his 3 point proficiency as a decoy to get his defender either up in the air or out of position, this skill will serve him well going forward this year if his 3 isn’t falling consistently.

Jabari Parker efficient on the offensive end for Duke scoring 21 points on a variety NBA-type moves, and off feeds resulting in lobs. Parker also pulled down 6 rebounds. Where the freshmen is lacking is his defensive presence. Duke is going to have to figure out a way to get the young freshman engaged on the defensive end without it getting him into foul trouble. Duke will always need points from Parker but as noted by the broadcasters even, teams are not going to allow Duke to hide him on defense. Parker will have to aid his teammates in getting stops. That is the biggest issue I see for the freshman going forward. Rodney Hood gave Duke 15 but didn’t shoot the ball particularly well, he gave Duke 5 boards and 3 assists and only turned the ball over once against Gardner-Webb.

The numbers that jump out to me in this game are the field goal percentage that Duke allowed Gardner-Webb to shoot (54%) Duke is going to need to get that number down, especially against quality opponents. Duke also out-rebounded the Runnin’ Bulldogs 37-22. Amile Jefferson was able, for Duke, to pull down 10 in this game. Collectively the team rebounded pretty well, which is a good sign as it has been a point of emphasis in practice.

All in all, not the best I’ve seen Duke play this year but mitigating factors in play. I would say I am happier with the effort after watching it a second time. The process is slow but trending toward the right direction on both sides of the floor for the Devils.

The questions that remain going forward:

-How does Rasheed Sulaimon get it going?
-How does Duke get Jabari Parker better adapted to playing defense?
-Can Duke continue the Center by Committee or will Plumlee or Jefferson emerge as the go-to guy in that position?

Next stop for Duke is Madison Square Garden for the CARQUEST Auto Parts Classic against UCLA.