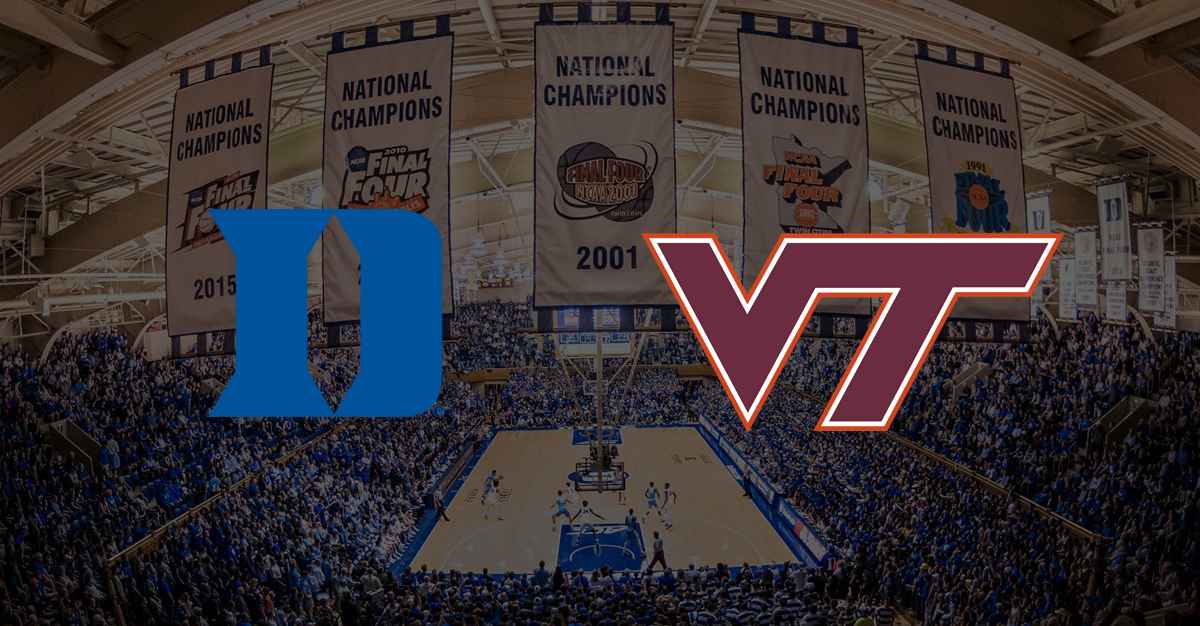 By Brian HoraceJanuary 12, 2021No Comments

Virginia Tech bounced back from a two-point loss at Louisville to run away from Notre Dame, 77-63, Sunday night at home. The Hokies are 9-2 overall and 3-1 in ACC play. Junior transfer Keve Aluma, who followed Young from Wofford, leads the Hokies in both scoring (15.5) and rebounding (7.0) and shoots a team-best .523 from the field. Second-leading scorer sophomore Jalen Cone is hitting nearly 40 percent of his three-pointers (27-of-68) and averaging 12.9 points. Virginia Tech’s +10.36 scoring margin this season is fifth-best in the ACC, and the Hokies are third in three-point accuracy (.353).

The Blue Devils are coming off of an 11 point win versus Wake Forest. The Blue Devils are on a 3 game winning streak currently with each win coming against ACC teams. The Blue Devils are looking to open ACC play 4-0 or better for the second consecutive year and 14th time in the Mike Krzyzewski era. Duke has won three straight in the series versus Virginia Tech and leads the all-time series 50-10, including 13-7 in road contests. Duke and Virginia Tech are clashing in a Top 25 matchup for the third time in the last five games in the series. Duke, which has played seven games this season, has had five others canceled or postponed because of COVID-19 issues with the opponent. Duke’s seven games are third fewest in the Power 5.

The Blue Devils have deployed a different starting lineup six times with only Matthew Hurt starting all seven games. Fresh off a career-high 26 points in the Wake Forest win, Hurt leads the ACC in scoring at 19.6 points per game, is fourth in rebounding (8.1) and fourth in field goal percentage (.535). He is one of four players ranked in the conference’s top 10 in scoring, rebounding and field goal percentage and one of two ranked top-five in each. Hurt’s +9.83 points per game improvement from last year to this year leads all ACC players.

There is no magic gameplay for the Blue Devils to get a win a Virginia Tech, it’s going to take doing the little things that Duke has slowly been improving that will rule the day. The fundamentals if you will. Defensively Duke has to close out well and quickly against the Hokies and Duke will have to be disciplined on screens – the Blue Devils have given up way too many open shots from the perimeter and Duke isn’t a team that is going to be able to win the game from outshooting their opponents. Allowing the Hokies to go 5-10 or 4-10 is likely a scenario that puts Duke down double digits. Being able to force shots late in the shot clock and on switches for Duke’s bigs to be able to move their feet and contest with discipline will go a long way. Knowing who the shooters are on the scouting report will be important as well.

Offensively, Duke cannot have a first half like they did against Wake Forest where the Blue Devils had 9 turnovers. Obviously the youth of the Blue Devils is a factor in how they value the ball and the fact that they’ve not played nearly the amount of games together they should have. Discipline will be important. Possessions are going be at a premium as well as maximizing those possessions. If Duke can continue the trend of the last game of rebounding the basketball well, especially on the offensive end those numbers and the possibility of second chance points could and should be a factor for the Blue Devils. In the last two games the Blue Devils have 34 offensive rebounds.