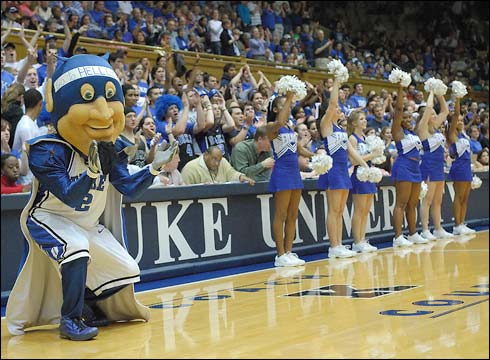 Duke came into Tuesday night against Wake with one goal in mind, that goal was to finishÂ  a perfect 8 – 0 on the road in the ACC, quite the accomplishment for a team who by all accounts have a ton of unanswered questions. The biggest question is defense, Duke has allowed teams to crawl back into games far too often for a team searching for success in March. Defensive lapses could have easily cost Duke this game. With the outcome well in hand and a 23 point lead, Duke allowed Wake to go on a 19-2 run and knock the Devils back on their heels.

Duke built that lead on the shooting touch of Ryan Kelly who scored a career-high 23 points against the Demon Deacons, Kelly went 4 out of 5 from 3 point range and 7 of 13 overall. Duke got a quieter game from Austin Rivers who scored only 10 points in the game on 5 of 12 shooting and looked visibly winded in the game. From the Plumlees Duke got 18 rebounds and 15 points with Miles doing most of his damage on the boards with 11 and Mason in the scoring column with 12. Mason also went 8 of 9 from the line which if continues is good news for the coaching staff.

Seth Curry also had a big game with 15 points going 5 of 12 and was Dukes steadiest guard in the contest, at one point Curry seemed to tweak his knee a bit but returned to the game and hit big shots for Duke down the stretch.

It was a good night in the sense that Duke accomplished its goal of an 8 and 0 conference record on the road, but the questions surrounding this teams commitment to defense for a full 40 still remain. Duke has a short time to address these needs before Carolina comes into Cameron on Sunday but moreover in tournament time where all is one and done.