By Brian HoraceFebruary 19, 2014No Comments

The Duke Blue Devils wrecked Georgia Tech 68 to 51 on the strength of a balanced scoring attack and a renewed and stifling defensive effort.  Duke would shoot the lights out in the first half to the tune of 58.6% from the field and 63.6% from the three-point line and would lead at the half by 16 points. Dukes 3 point shooting in the first half would stretch the lead out and put pressure on the Yellow Jackets to keep up…and in this game they could not. Tech could not match the clip at which Duke made shots and when they did manage to muscle the ball inside they made 2 point shots and gave up 3 at the other end.

Once Duke got a comfortable lead it would sub and mix its rotations, most likely to conserve energy in this tough stretch of games that includes UNC tomorrow and Syracuse on Saturday. Marshall Plumlee would record 8 minutes in the victory and while not breaking through on the stat sheet he gave Duke good minutes. Duke was looking to get more from Senior Josh Hairston in relief of Jabari Parker and Amile Jefferson but the Hairston was whistled for 4 fouls in only 5 minutes of play. Also from the bench Duke got 7 minutes from freshman Matt Jones who made the most of his time recording 3 rebounds, an assist, a steal and a blocked shot.

In the second half Georgia Tech would get Duke’s 21 point lead down to 12 with a mini-run but Duke would counter with threes from Andre Dawkins and Rodney Hood.

Duke was lead in scoring by freshman Jabari Parker who had 16 points on 6 of 12 shooting, Parker also pulled down 14 rebounds etching his 9th double-double of the year.

Rodney Hood gave Duke 4 of 6 shooting from behind the 3 point line and scored 14 points for the Devils. Rodney did have a rebound and an assist in the game but Duke will need much more from him in the rebound department going forward. Hood did on several occasions bail Duke out with his shooting. His threes were timely and in rhythm.

Duke got 11 points from Rasheed Sulaimon and 9 from Quinn Cook in the game. Sulaimon once again played a lot of point guard for Duke and did a great job of getting Duke into it’s offense and played well with senior Tyler Thornton and Quinn Cook. Sulaimon was also one of only 2 Duke players to hit a free throw going 6 for 6. Cook, who  has been in a mini slump, did not shoot well from deep but did shoot 50% overall for his 9 points. Cook also dished 2 assists and played a much better floor game for the Devils in this game.

The good for Duke is the defensive effort was stellar, Duke pressured the ball well on the perimeter and defended the post. Also good for Duke is they shot the ball well. Duke did a good job keeping minutes reasonably low for the upcoming stretch of games. Duke won the turnover battle 13 to 5 and from that they scored 16 points off of turnovers to Georgia Tech’s 5. Despite losing the rebounding battle by 5 Duke drew even in second chance points 10-10.

Not so great for Duke,  the free throw shooting…it was awful. Duke shot 10 of 20 from the free throw line for the game. Duke was also out rebounded, enough so that Coach K called a timeout just to rail the team about their lack of boxing out as several times on the defensive end Duke players watched shots go up without laying a body on Georgia Tech players.

All in all though, Duke controlled this game from start to finish and was able to do so in a low-key fashion somewhat by slowing the game down in the second half. That lack of ferocity coincided with the Georgia Tech second half run. 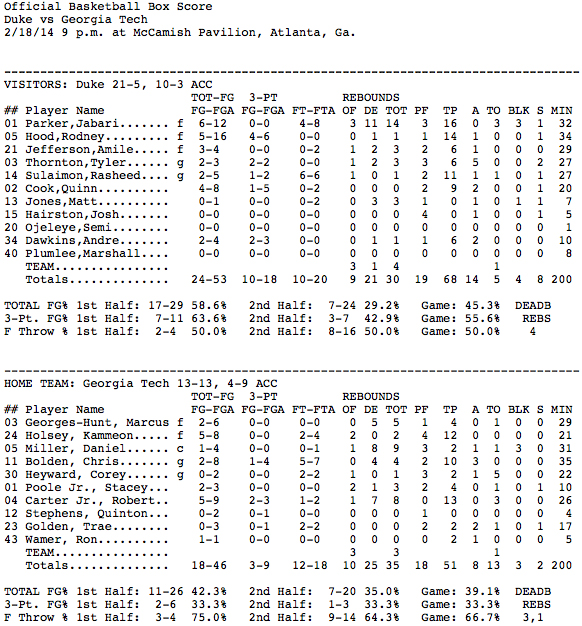 “I’ve got to start off and give Duke a ton of credit. They came out very focused and played with great force to start the game. They have dramatically improved defensively from the first time we played them earlier in January. I think playing more guys, and those guys buying into playing with the pressure that they played with was key tonight. That really put us in a tough hole. We’ve got to do a better job of taking care of the basketball and do a better job of executing and getting into the offense.  Sometimes when you have to make those one-on-one plays over the course of 40 minutes, there’s just not enough time to make enough of those.  That was the case for us today. Defensively we got put on our heels a little bit with some of those early drives.  We got in some foul trouble, and they took advantage of that by knocking down some open shots. We’ve got to re-group and get ready for Saturday afternoon. A positive was that I thought Trae (Golden) looked a lot better tonight than he did 10 days ago when he played against Virginia. I think with a couple more days of practice I think he’ll be ready to go and be much more effective on Saturday.”

“The best way to combat pressure is to throw it underneath that pressure. Right after the tip, we got an opportunity to throw it into the post and we were unable to do that. You have to be strong on the wing and rip the ball through.  You’ve got to be able to take some hits and some contact and be strong enough to still be able to feed the post. We weren’t able to do that tonight.”

Dealing with and adjusting to the Duke game plan throughout the game:

“Unfortunately it’s a strange game.  We played much better at Duke than we did here, but we lost by more points there. To me it wasn’t even close when you compare the competitiveness of the game. We were able to draw some fouls and get to the free throw line.  We didn’t make enough of those.  There were two or three possessions in the second half where we forced great stops.  We just weren’t able to get over that hump. When you play a quality team like Duke is, you need to have that effort on every play.  I think we did a pretty good job in the second half defensively and did a pretty good job on the glass. Our offensive inefficiency against their pressure was the key.”

“I thought Kam (Holsey) Daniel (Miller) and Robert (Carter Jr.) played pretty well throughout the game. Robert did some good things in 26 minutes which was a good number for him. He’s progressively getting better. He’s feeling more comfortable.  The one thing we need from Kam-he played 21 minutes and didn’t get a defensive rebound.  I think that’s humanly impossible. We need him more engaged on the glass for us on the defensive end. You need Daniel as your pressure release to set those ball screens and that takes him away from the basket.”

What to take from tonight:

“Most lessons in life, you have to live them, not talk about them or watch them.  We lived one tonight. That team went after us aggressively on the defensive end, and we didn’t respond as well as you need to. There were times where we did do some good stuff.  We got the ball moving, got it inside, reversed it, found the open shot.  I think we’re step closer after tonight to getting as whole as we possibly can for the remainder of the year. It’s hard sometimes when you go through some of this stuff with injuries with the guys because you’re out of sorts when they get hurt and then they come back you kind of get out of sorts again. Hopefully we’ll have two really good days of practice with Robert full-go.”

“We’re really pleased with our performance tonight. We knew Georgia Tech, having six days off, were going to come out ready to play. It was a good crowd. Our guys played a heck of a first half. We played with amazing energy and focus. For the first five minutes of the second half we did it too. We couldn’t score and a lot of that has to do with Georgia Tech because they protect the basket so well. We started missing free throws and their defense picked up, and all of a sudden they were right in the game. I thought Jabari Parker made a big three point play on an offensive rebound, and then we played outstanding defense. Tyler Thornton made a couple defensive plays to give us possessions, in the back court, knocking it off a leg. I thought defensively we were outstanding tonight.”

On protecting the ball…

“We’ve done a pretty good job of that all year. One of the things we do have; we have a lot of basketball players. They’re not necessarily positions, but Amile Jefferson can handle the ball, Jabari Parker can definitely handle the ball, so our two starting big guys are ball friendly; Parker being extremely ball friendly. Sometimes in the game you have Rasheed Sulaimon, Tyler Thornton and Quinn Cook, who all three have played point guard. We made good decisions with 14 assists and five turnovers. It’s something we’ve had a number of times this year, hopefully we can keep that going.’

What went into the decision for the five-guy line change?

“We’ve done that before. We got away from it a little bit. We want to make sure that everyone on our team knows that they’re important. You can get in to playing seven or eight guys, and a kid might lose his confidence or he can think you don’t have confidence in him. We told them after the Maryland game to just be ready. We’re not going to keep doing that all the time. For tonight, we thought it was good. It really helped us in the first half. In the second half we didn’t get the same pop from it. We actually lost the lead. But overall, I think it was a good thing to do and I think it kept us a little bit fresher.”

How were you able to limit Daniel Miller two points?

“He didn’t get the ball that much and he didn’t because our perimeter defense was the best it’s been all year. We contested or denied. They have to run their offense pretty far out. Our ball pressure and contesting we thought was going to be a key for the ball game. It would make the passes longer and the vision tougher to see the post. Our perimeter was outstanding in that tonight and it helped our big guys. Our big guys did a nice job, but they got a lot of help from the perimeter.”

Was the perimeter defense plan because Tech didn’t have Trae Golden?

“It was our game plan; to pressure the ball. I think Corey Heyward has done a great job for them. It’s not like we could take the ball away from them. They are really good players. We just thought that if they were occupied with our pressure they wouldn’t be seeing the post as much. Part of playing post defense, most times is what you do on the perimeter.”