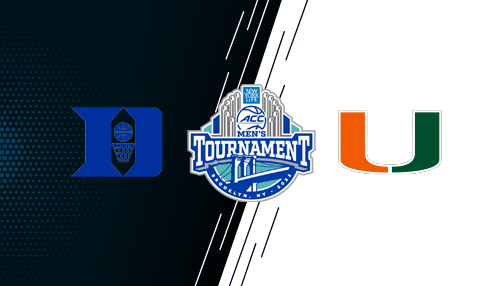 By Brian HoraceMarch 11, 2022No Comments

Duke in the ACC Tournament

The overall No. 1-seed and the outright ACC regular season champion, Duke battles No. 4-seed Miami in the semifinals of the 2022 ACC Tournament Friday night.

The Hurricanes enter Friday having beaten Boston College on a last second Jordan Miller layup, taking the game 71-69. Kameron McGusty led the Hurricanes with 16 points, they also got 15 points and 6 assists from Charlie Moore and 14 from Isaiah Wong.

Miami has won seven of their last nine games and have already taken down the Blue Devils in Cameron this season. McGusty has been the Hurricanes leading scorer all season at 17.4 per game. Moore leads the team in assists at 4.4 per game and Jordan Miller leads Miami in rebounding at 5.9 per game.

Duke defeated Syracuse, 88-79, in Thursday’s quarterfinals by closing the game on 10-0 run. Sophomore Mark Williams and freshman Paolo Banchero each had double-doubles, while junior Wendell Moore Jr., scored a career-high 26 points in the victory. The Blue Devils are 13-2 away from Cameron Indoor Stadium this season and have won nine consecutive road and neutral games. Williams was named the ACC Defensive Player of the Year and third team All-ACC, while Banchero was named Freshman of the Year and first-team All-ACC. Moore was named second-team All-ACC, while freshman AJ Griffin was an honorable mention All-ACC selection.

Williams and Moore were All-Defensive picks, while Banchero, Trevor Keels and Griffin were named to the All-Freshman Team. Miami defeated Duke, 76-74, at Cameron Indoor on Jan. 8 — five days after the Blue Devils returned from a COVID pause that forced the team to postpone two games and miss nearly two weeks of practice. Over the last four games, three players have posted career highs in scoring: Mark Williams (28) at Syracuse on Feb. 26, Trevor Keels (27) at Pitt on March 1 and Wendell Moore Jr. (26) vs. Syracuse Thursday.

Duke has had five different scoring leaders over the last five games and five Blue Devils are averaging double-digit points this season. In three career ACC Tournament games, Williams is 22-of-32 (.688) from the field and averaging 17.0 points and 12.0 rebounds. Sophomore Jeremy Roach has scored in double figures five times over the last seven games, including a season-high 19 points Thursday. Roach had just six double-digit games over the first 25.

On Jan. 8 at in Durham, Miami scored the game’s final five points to lift the Hurricanes to a 76-74 victory after a Paolo Banchero breakaway dunk put Duke up 74-71 with 45 seconds remaining. Banchero had 20 points and seven rebounds for the Blue Devils, while the Canes had four in double figures led by Charlie Moore’s 18, including seven of Miami’s 15 steals. Last year’s game featured five ties and 20 lead changes. Matthew Hurt scored 21 to lead the Blue Devils, while Wendell Moore Jr., added 18 on 7-of-9 shooting with six rebounds and three assists.

Duke has won seven consecutive ACC Tournament games and has not lost since the 2018 semifinals in Brooklyn. The game was the 20th in the series vs. Syracuse, with the series now 14-6 in Duke’s favor. The Blue have won all five of the all-time meetings in the postseason (2-0 in the ACCT and 3-0 in the NCAA Tournament). Duke defeated Syracuse three times this season — its first time beating an opponent three times in the same season since 2011-12 (Virginia Tech).

Mark Williams recorded his ninth double-double this season (11th career) with 15 points and 16 rebounds and a career-high four assists on 7-of-11 shooting. All 15 of his points and eight rebounds came in the second half. In three career ACC Tournament games, Williams is 22-of-32 (.688) from the field and averaging 17.0 and 12.0 rebounds. Paolo Banchero recorded his ninth double-double with 10 points and 10 rebounds, along with seven assists and a career-high five steals. Banchero’s five steals tie seven other Blue Devils for the second most steals in an ACC Tournament game. Christian Laettner’s seven steals are Duke’s single-game ACCT record (vs. UNC, 3/15/92).

Jeremy Roach hit a career-best five three-pointers on 10 attempts and finished with a season-high 19 points. Of Roach’s 19 points, 16 came in the second half. Roach’s five threes stand as the fourth most threes by a Blue Devil in an ACC Tournament game — 13 other Blue Devils also had five in the ACCT — last by Grayson Allen vs. Notre Dame (3/8/18). Roach has scored in double figures five times over the last seven games – had just six double-digit efforts over the first 25 games. Over the last five games, Roach is a combined 22-of-38 (.579) from the field and 11-of-22 (.500) from three-point range. Trevor Keels was the fifth Blue Devil in double figures with 14 points. Duke is now 19-2 this season when Keels scores in double figures.

The Blue Devils, in one of their worst games of the season in terms of ball security, turned the ball over 17 times against Miami. Those turnovers led directly to 17 points for Miami. Duke also allowed the Hurricanes 10 offensive rebounds that led to 12 second chance points. Duke was unable to control the pace of the game and allowed the Hurricane guards easy access to the rim leading to a 52-38 edge in points in the paint.

Duke will have to play a much better defensive game against Miami than they did against a limited Syracuse team. Duke’s inaugural post season game this season was full of defensive miscues and very little communication on that end of the floor. If they duplicate that effort it will be a long flight back to Durham. Duke has to play a better more physical brand of basketball on both ends of the floor but also need to take care of the basketball. Duke has the tools to dominate but they’ve been, in the last couple of games, trying to use a screwdriver to hammer nails. The lapses on both ends of the floor have been killers. The game and all the games forthcoming will be tests of Duke’s toughness, coachability and attention to detail.