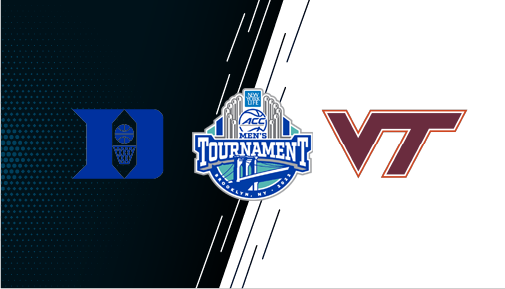 By Brian HoraceMarch 12, 2022No Comments

Duke in the ACC Tournament

A pair of teams that haven’t met since three days before Christmas will collide in the ACC Championship Game as No. 1-seeded Duke battles No. 7-seed Virginia Tech on Saturday night in Brooklyn.

Saturday’s game is the 63rd meeting between Duke and Virginia Tech, with the Blue Devils leading 51-11. Duke has won four of the last five in the series. Coach K is 21-8 versus Virginia Tech. When the teams met at Cameron Indoor Stadium on Dec. 22, Paolo Banchero scored 23 points with seven rebounds, while Wendell Moore Jr., added 18 as Duke won its ACC opener, 76-65. Keve Aluma scored 25 points with 10 rebounds, while Justyn Mutts added 20 for the Hokies.

A freshman has led Duke in scoring in each of the last six games against Virgina Tech, including Banchero’s 23 in December and Jeremy Roach’s career-high 22 points last season in Blacksburg on 6-of-14 shooting. Duke and Virginia Tech have met twice previously in the ACC Tournament — with the Blue Devils winning 77-63 in the 2011 semifinals behind 27 points from Nolan Smith, and 60-56 in the 2012 quarterfinals behind 17 from Austin Rivers.

Virginia Tech dispatched of Clemson in their first game in dramatic fashion with a 1 point overtime victory. They then went on to take down the number 2 seed Notre Dame by 7 points before using a second half surge to win by double digits over the 3 seed North Carolina Tar Heels on their way to the Championship game.

The Hokies are one of the hottest teams in the country currently and have won 12 of their last 14 games – including 2 higher seeds in this ACC Tournament. Virginia Tech finished the season 3rd in the ACC in 3-point field goal percentage and 5th in assists.

So far in the tournament Virginia Tech has been hot from beyond the arc, shooting 41.5% while holding their opponents to just 27.7%. Getting points off the bench has also been huge for the Hokies who have amasses totals of 23, 19 and 30 from heir bench so far in the tournament. Keve Aluma has been the leading score for Virginia Tech all season and has duplicated that feat in 2 of the 3 games in the ACC Tournament so far.

Over two games in Brooklyn, Duke has out-scored the opposition 27-16 in the games’ final five minutes. Duke led Syracuse by two and was tied with Miami with five minutes remaining.

Freshman Paolo Banchero has recorded two straight double doubles — 10 points and 10 rebounds with seven assists and five steals against Syracuse and 18 points and 11 rebounds against Miami. Junior Wendell Moore Jr., scored 17 points with a career-high three blocks against the Hurricanes, while freshman AJ Griffin scored a team high 21 points on 4-of-6 from three-point range.

Duke has had six different scoring leaders over the last six games and five Blue Devils are averaging double-digit points this season. In four career ACC Tournament games, Mark Williams is 26-of-40 (.650) from the field and averaging 15.0 points and 11.5 rebounds.A pair of teams that haven’t met since three days before Christmas will collide in the ACC Championship Game as No. 1-seeded Duke battles No. 7-seed Virginia Tech on Saturday night in Brooklyn.

I expect the Hokies to come out and play with poise and efficiency Saturday night. Their style of play is conducive to this type of tournament. Virginia Tech is not in a hurry and is very willing to play in the half court. This hasn’t been a strong suit of the Blue Devils so it should be an interesting contrast of styles. The Blue Devils will need to be precise defensively, especially on the perimeter. Not too many teams in the nation are shooting the 3 as well as the Hokies are, especially in this tournament, they have been hot but moreover they are guarding the 3 well.

Duke has to do a better job with shot selection and work the ball inside out as much as possible. There’s not much point in having a size advantage if you refuse to use it. There is a contingent of fans that say the Blue Devils should go small to match the Hokies. Part of me agrees but most of me disagrees. The issue with adjusting what you do in such a big way is you are taking away your most efficient low post threat and not making Virginia Tech adjust whatsoever. If the Blue Devils can be more deliberate about pounding the basketball into the paint rather than spending the majority of the shot clock dancing around the key I think they can put some distance between themselves and Virginia Tech. Maximizing matchups is what tournament play is about. Duke will have to do that better than Virginia Tech.