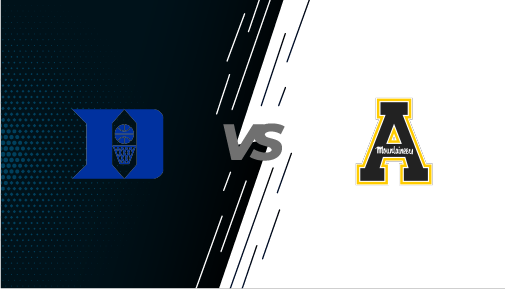 By Brian HoraceDecember 15, 2021No Comments

Under third-year head coach Dustin Kerns, App State was 17-12 last season, won the Sun Belt Tournament title and made the program’s first NCAA Tournament appearance since 2001. The Mountaineers head into Cameron with a 6-5 record and having won 3 of their last 4 ballgames – the lasted win against Erskine was a 25 point blowout. The Mountaineers were 35th in scoring defense last season (64.1) and this year they are yielding just 58 points per game — 18th best scoring defense nationally — and has not allowed an opponent to score more than 75 this season.

Eight of the 15 Mountaineers are either juniors, seniors or graduate students. Senior Adrian Delph is the only Mountaineer averaging in double figure points at 15.8 per game, but three others — senior Justin Forrest (9.3), graduate Michael Almonacy (9.3) and junior Donovan Gregory (8.7) are averaging 8.0+ per game. James Lewis is the teams leading rebounder at 5.6 per game, followed by Delph at 5.1. The leading assist man for App State is Michael Almonancy. Duke and App State are two of the least-fouling teams nationally, with the Blue Devils being whistled for 13.4 fouls per game (17th in the NCAA) and the Mountaineers just 12.9 (seventh fewest). Duke (9.3) and App State (9.7) are also ranked eighth and 10th, respectively, in the NCAA in fewest turnovers per game this season.

The Blue Devils are currently 8-1 and coming off of a 103-62 win at home versus South Carolina State. Duke has been one of the nation’s best ball-handling teams, ranking third in the NCAA in assist/turnover ratio (+1.95), eighth nationally in fewest turnovers (9.3), 13th in turnover margin (+5.8) and ninth in assists per game (18.2) — Duke joins Northwestern as the only teams in the nation to rank in the top 15 in each category. The Blue Devils have posted a positive assists-to-turnover ratio in each of the last eight games after starting minus-1 in the opener against Kentucky (eight assists, nine turnovers). Duke is forcing 14.9 turnovers, averaging 9.1 steals and owns a +107 margin in points-off-turnover scoring (176-69).

Duke is led in scoring by a pair of versatile forwards in Paolo Banchero and Wendell Moore Jr. The duo of Banchero and Moore are averaging 17.1 and 17 points a game respectively with Banchero leading the team in rebounding at 7.2 and Moore leading in assists at 5. Trevor Keels is the only other Blue Devils posting a double figure scoring average at `12.1 although 2 other Blue Devils (Mark Williams & Jeremy Roach) are averaging just under 10 at 9.7 and 9 points.

Nothing changes for the Blue Devils in this game from the last or to the next game. While Duke should win and comfortably the Blue Devils are facing a team that is going to try to slow them down. Duke could use this opportunity to work on their half-court offense which is a work in progress. The Blue Devils took steps against South Carolina State and moved the basketball much better but there are still areas to work on there. Duke was careless with the basketball and allowed too many points off of turnovers as well as second chance points. Rebounding has been an issue all year so this could be another area and opportunity for a get right game.

Duke also came off their exam break and shot the ball much better, a second consecutive game shooting a good percentage would also be a good think for the Blue Devils. Another positives from Duke’s last outing was the bench. Duke was able to get good minutes from reserves AJ Griffin, Joey Baker and Bates Jones. Griffin in particular can use back to back games with minutes and opportunities as long as his defense is up to snuff. Griffin moved much better Tuesday night against the Bulldogs and his offensive explosion was a treat for Duke fans and the Blue Devil bench.