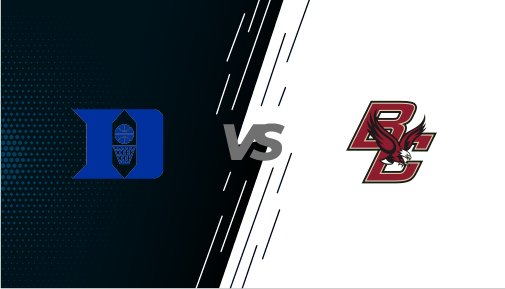 By Brian HoraceFebruary 11, 2022No Comments

Winners of six of its last seven, including four straight ACC road wins, No. 7 Duke battles Boston College Saturday in Chestnut Hill. Duke leads the all-time series 25-3, including 9-2 in road games — all coming at the Conte Forum.

Boston College is 9-13 overall and 4-8 in ACC play, including a 73-57 win over Notre Dame on Dec. 3. First-year head coach Earl Grant spent the last seven years at College of Charleston where he led the Cougars to a top-four finish in the CAA in each of the last five seasons, including the 2018 regular season and conference tournament championship. Grant was a Clemson assistant before taking the Charleston job.

Makai Ashton-Langford leads the team in scoring at 12.5 points and 3.1 assists, while his brother, DeMarr Langford, is the team’s second leading scorer at 10.6 points. BC’s leading rebounder, T.J. Bickerstaff, grabs 8.0 boards per game and is one of only 15 players nationally this season with multiple games of 17+ rebounds.

The Blue Devils, who remain in a first place tie in the ACC and hold the tiebreaker over the two teams within a half game, cap a stretch of five of their past six on the road Saturday — the BC game also marks Duke’s fourth game over an eight-day period.

Six-time ACC Freshman of the Week and the ACC’s lone representative on the late-season watch list for the Wooden Award, Paolo Banchero has nine 20-point efforts this season — seven coming against power conference opponents, six in ACC play — in addition to 21 vs. Gonzaga. Banchero leads the Blue Devils in scoring at 17.1 points per game, Banchero also leads the Blue Devils in rebounding at 8.5 per contest.

Last time out the Blue Devils downed the Clemson Tigers 82-64 night from Trevor Keels and 8-of-8 shooting from Mark Williams. Keels has scored in double figures in each of the last three games, including his first double-double at Clemson with 25 points and 11 rebounds. He is averaging 16.0 points and six rebounds over the last three games, since returning four games ago from a lower leg injury. Duke is 14-1 this season when Keels scores in double digits.

Sophomore Mark Williams, a finalist for the Naismith Defensive Player of the Year, leads the ACC and is 11th nationally in blocks (3.08). Williams’s 8-of-8 at Clemson marked the 22nd occurrence in program history of a player making at least eight field goals with no misses — he has the last two (9-of-9 at Georgia Tech last season).

Junior Wendell Moore Jr., had eight assists and no turnovers at Clemson — his fifth game this year with at least five dimes and no turnovers.   Freshman AJ Griffin is the nation’s only power conference player shooting at least .500 from three-point range (min. 50 attempts).

Duke vs Boston College: Keys to the Game

For the Blue Devils to win win Chestnut Hill they will have to gut out tired legs. Playing 4 games in 8 Days and 2 straight on the road is bound to take effect on the Blue Devils especially the freshman. It would be mistake for the Eagles to play a slower pace, pushing to make Duke defend in transition could pay dividends for BC. The Blue Devils will need to maximize possessions and if they do manage to get a working margin – push it. Duke may not have the energy to fend off multiple runs and playing against the number 1 offensive rebounding team may be a challenge. Making sure they complete the defensive exchange ie grabbing defensive boards is a must.

It would be surprising if BC doesn’t try to test Duke physically, Virginia out toughed the Blue Devils and Clemson, for some stretches, did the same. Finishing through contact has been an issue for the Blue Devil especially on tired legs. Stealing minutes from the bench will also me a crucial element to this game.

The normal recipe for Duke still applies, rebounding and don’t turn the ball over – rinse and repeat. Duke, when they are strong with the ball, wins.