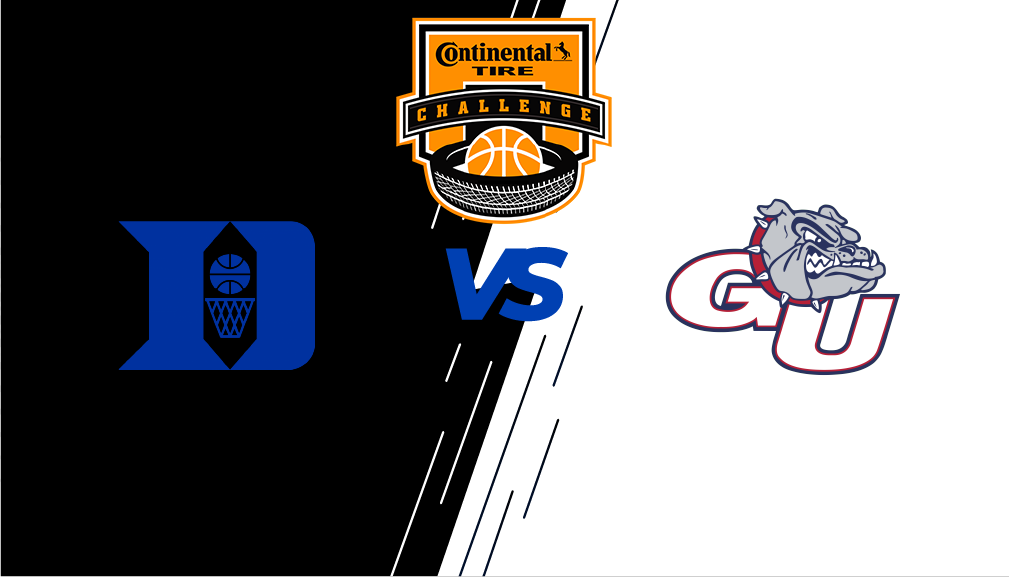 By Brian HoraceNovember 25, 2021No Comments

In a clash of top-5 heavyweights, No. 5 Duke battles No. 1 Gonzaga on Friday night at T-Mobile Arena in Las Vegas for the Continental Tire Challenge presented by Ameritas. No. 1 Gonzaga is 6-0 to start the year and the game is Gonzaga’s third this week at T-Mobile Arena in Las Vegas after beating Central Michigan (Monday) and No. 2 UCLA (Tuesday).

The Bulldogs of Gonzaga have been steadily building a resume over the past decade of a program that belongs alongside the Duke’s, the Kentuckys and the UNC. Not a Blue Blood but certainly Blue Blood adjacent. Through h all of their regular season and conference success and coming off of a year where they only loss they suffered was in the title game – this still might be the best team the Zags have put together. The Zags have dominated their opponents holding them to 37% shooting and under 30% from beyond the arc. Offensively Gonzaga is 3rd in the nation in scoring and first in field goal percentage.

Led by junior Drew Timme’s 18.7 points, the Zags have four averaging in double figures. The team scores at a 91.5 points per game clip and their scoring margin of +31.5 is fifth best in the NCAA this season. Freshman Chet Holmgren averages 13.2 points, 6.7 rebounds and shoots .714 (30-of-42) from the floor. Andrew Nembhard leads the team in assists with 5 per game. The zags have 4 starters shooting better than 38% from beyond the arc.

The Blue Devils come into Friday at 6-0 just like the Zags but aside from there Wildcats of Kentucky the Blue Devils have not faced another ranked team. The Blue Devils are coming off of a stint of 5 games in 10 days. Last time out the Blue Devils faced a Citadel team that made 18 shots from beyond the arc, breaking the record for Cameron Indoor opponents.

Freshman Paolo Banchero is Duke’s leading scorer (17.8) and rebounder (8.0) after his career-high 28 points in The Citadel win. Banchero has 11 assists and one turnover over Duke’s last three games — had just one assist and 10 turnovers over the first three. Right behind Banchero is junior Wendell Moore Jr. at 17.5 points per game. Moore Jr. is the nation’s only power conference player averaging 17.0+ points, 6.0+ rebounds, 5.0+ assists and shooting .500+ from the field this season (17.5/6.3/5.7/.575) and he leads the Blue Devils in assists at 5.7 per game. Moore has one of the two triple-doubles in the nation this season with his 19 points, 10 rebounds, 10 assists vs. Army, and is coming off a 22-point, nine-assist, eight-rebound game vs. The Citadel. Mark Williams leads the Blue Devils in in blocked shots at 2.8 per game to go along with his 8.7 points.

Gonzaga has been a juggernaut and the Blue Devils even with a 6-0 record are still figuring things out. While most of the attention nationally is on the frontcourts of both teams. With freshmen Chet Holmgren, Paolo Banchero and junior Drew Timme getting the lions share of the attention the most important battles may happen in the backcourt. Andrew Nembhard has been the engine that makes the Zags go and he doesn’t have to score to do it, although he is highly capable of putting up numbers on the offensive end. The fast break offense the Zags have displayed has been impressive and any of their 5 starters can rebound the ball and lead the break. They may be the most versatile team in the nation and the most ready. Duke guards Jeremy Roach, Trevor Keels and Wendell Moore Jr. will have their hands full not only running the Zag guards off of the 3 point line but also protecting the mid-range. The Zags lead the nation in 2pt field goal percentage.

The damage from beyond the arc is primarily done by guards Julian Strawther and Rasir Bolton who both shoot above 48% from 3 but are also adept at feeding the post to their formidable from court. Drew Timme has the best footwork of any big in college basketball today and is improving each year. He has a plethora of moves in the post and is a crafty playmaker from the post, He reminds me of a young Kevin McHale with his up and under and ability to find holes even when double teams. Chet Holmgren presents a unique challenge for the Blue Devils. The freshmen has an array of skills that most 7 footers only dream of. Rebounding and blocked shots come easy for the freshman who also has displayed the ability to take opponents both off the bounce and step back and hit shots from 3 point range effectively. The most underrated part of Chet’s game is his ability to thread the needle with his passing. Cutting guards can be assured of pin-point passes from the 7 footer for easy shots.

For Duke to win they will have to put a choke hold on the Bulldog backcourt. Slowing the game down may work in Duke’s favor but if the Blue Devils have eyes for running with Gonzaga they will need to play much better transition defense than they have thus far this season. The Zags feasted on the number 2 Bruins in transition and by the time UCLA figured it out the game was out of reach.

The x-factors for the Blue Devils will be the bench and rebounding, being beastly on the boards will go along way for the Blue Devils winning against the Zags.  Duke will also need bench contributions from AJ Griffin, Joey Baker and Theo John to counter the Zags who will go 9 deep. Duke will need to settle in quickly. The Zags have blitzed their opponents and Duke will need to whether the storm and keep their composure or this could get ugly quickly.

It will be huge undertaking for Duke to win this game but win or lose both teams will learn quite a bit about where they are but as all games go, this will be a snapshot – what matters is where they go from this point on.a