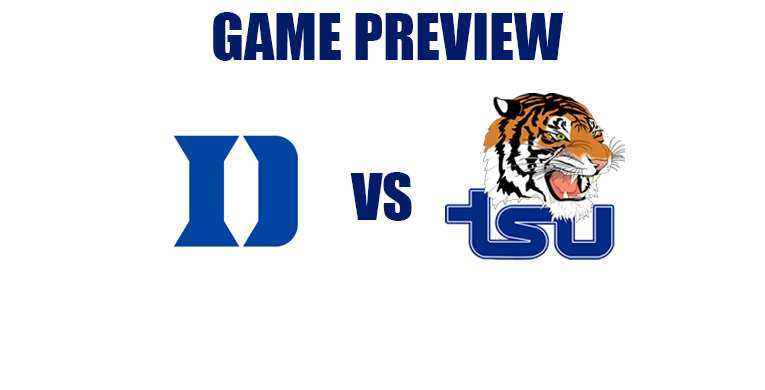 By Randy DunsonDecember 18, 2016No Comments

No. 5/4 Duke, winners of eight in a row, returns to Cameron Indoor Stadium for a meeting with Tennessee State to close this season’s home non-conference slate. The Blue Devils have won the third-most games (220) and have the fourth-best winning percentage (.821) in the nation this decade. Duke has won an NCAA-best 131 consecutive non-conference home games dating back to 2000

Tennessee State makes its first ever trip to historic Cameron Indoor Stadium for its first all-time meeting with Duke. TSU is 8-2 through 10 games for the second year in a row.

Since joining Division I prior to the 1977-78 season, Tennessee State has gone 1-33 versus teams in the AP Top 25. TSU’s win came on February 9, 2012 at #9 Murray State, 72-68. Tennessee State will be playing its ninth game away from home and its sixth game outside of the Central Time Zone.

Duke used the starting lineup of Chase Jeter, Grayson Allen, Luke Kennard, Matt Jones, and Amile Jefferson for the fifth time this season and owns a 4-1 record with those five players on the floor to start the game.

Duke has scored over 70 points in 11 straight games to open a season for the first time since the 2010-11 campaign, when the Blue Devils posted 15-straight 70+ point games.

The Blue Devils improved to 85-26 all-time when competing as the fifth-ranked team in the nation. Duke improved to 5-0 this season when netting at least 90 points in a contest. The Blue Devils’ 49-point margin of victory is the largest of the season, besting the previous high of 45, which came against Marist in the season-opener.

Duke has scored 90-or-more points in five of its first 11 games for the first time since the 2002-03 campaign and is averaging 86.3 PPG this season.

Blue Devils on the Glass

Amile Jefferson recorded 10 points on 4-of-6 (.667) shooting, marking his 10th-straight double-digit scoring game. Jefferson’s 10-point, 12-rebound performance marked his sixth double-double of the season and the 14th of his career. Duke is 12-2 when Jefferson posts a double-double.

Sophomore Luke Kennard connected on 2-of-5 (.400) three-pointers, his 11th straight game with at least one made three. Kennard also dished four assists, bringing his season total to 36. Kennard reached 36 assists in the 28th game of last season’s campaign.

Duke shot 10-of-22 (.455) from beyond the arc, the best shooting from three-point range for the Blue Devils this season.

Jefferson contributed five assists, his second five-assist game this year. His 24 assists this season rank fourth on the team this season.

Duke on the Defensive End

Duke forced UNLV into committing 21 turnovers (including 13 in the first half), the team’s ninth game forcing an opponent into at least 10 turnovers. The Blue Devils are 8-1 in such contests.

Duke converted UNLV’s 21 turnovers into 22 points. The Blue Devils’ 22 points off turnovers matched the second most of the season.

UNLV scored 45 points, the fewest by a Duke opponent this season, and the lowest score total by Blue Devil opposition since Presbyterian netted 44 Nov. 14, 2014.

Tennessee State sprinted out of the gate with an early 8-2 advantage four minutes into the game. TSU’s defense locked the Hornets down as the Tigers’ lead grew to double-digits at 22-12 on the second first-half three from Darreon Reddick (Belleville, Ill.) with 7:49 to go before halftime.

Tennessee State closed the first half on a 24-1 run, keeping the Hornets without a field goal for the last 8:47 of the half for a 40-13 halftime edge. The Tigers held Alabama State to 18.5 percent shooting (5-for-27) in the first half and forced ASU in 11 first-half turnovers.

TSU reached 50 points in a frantic sequence where Christian Mekowulu (Lagos, Nigeria) and Xavier Williams (Fairfield, Ala.) had blocks on ASU’s offensive possession leading to a three from Delano Spencer (Atlanta, Ga.) on the other end for a 50-19 lead with 14:20 left in the game.

The Tigers continued to dominate throughout the second half, leading by as many as 32 points with just over 12 minutes to play.

McCall dished out six assists to facilitate the offense with Mekowulu scoring in double figures with 12.

Tony Armstrong scored a team-best 13 points for the Hornets on the night.

This is the first meeting between these programs.

The Tennessee State Tigers will travel to Cameron Indoor Stadium to take on the 5th ranked Duke Blue Devils this Monday night in College Basketball action.

Tennessee State does have some big game experience this season, taking NC State to overtime but Duke is on a mission. A mission to get healthy and to catch up to the rest of the teams who haven’t been knocked off of schedule by injury. There is a possibility that Duke will have Harry Giles but there is also the possibility that he will not play. If Duke can get some minutes for Giles in this game and the next they will be set up to ease into the ACC season with all pieces accounted for.

Tennessee State does not have much of a chance to get the win in this one, however, with two great defense players in Tahjere McCall and Wayne Martin, I think the Tigers will be able to do enough to be competitive to a point. I see Duke winning 89-65.