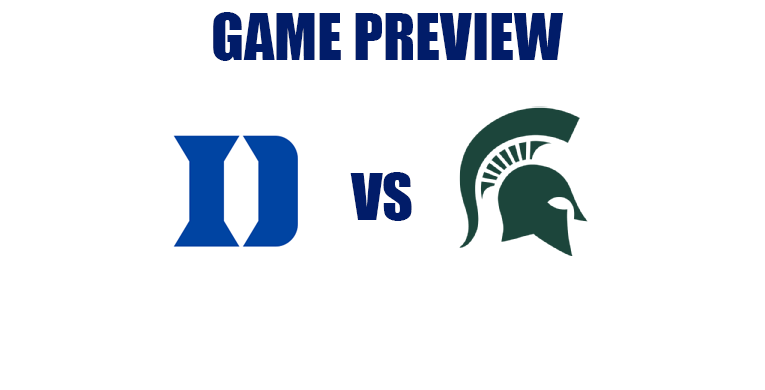 By Randy DunsonNovember 28, 2016No Comments

Duke and Michigan State will square off for the sixth time in the last seven seasons on Tuesday when they meet at Cameron Indoor Stadium as part of the ACC/Big Ten Challenge.

Michigan State travels to Duke for the ACC/Big Ten Challenge. This is the Spartans’ third trip to Durham in challenge history, with both previous games being decided by seven points or less. The game will be the sixth road game in the first eight contests for MSU, as the Spartans have already played games in Hawaii, New York, Michigan, and the Bahamas.

Tuesday’s game marks the final game in what is arguably the toughest opening month in college basketball history, certainly Spartan history. Having already played games against No. 2 Kentucky, No. 10 Arizona and No. 20 Baylor (rankings at date of game), Duke marks the fourth ranked opponent MSU will play in November alone. The Spartans have never faced three Top 10 opponents in November, and have never played four Top 20 non-conference opponents in a single month during the regular season. Not only will the Spartans play a diabolical slate of opponents, they will face a brutal travel schedule to open the season. Beginning with a flight to Hawaii on November 8 and ending with the return flight from Duke on November 29, the Spartans will travel more than 13,600 miles in 22 days, including additional trips to New York City and the Bahamas.

Michigan State is 7-9 in the Big Ten/ACC Challenge and had its 2001 game against Virginia in Richmond cancelled due to unplayable wet floor conditions. After dropping the first 10 challenges, the Big Ten has captured five of the last seven, with the conferences splitting the 2012 and 2013 Challenges, 6-6. Last year, the Big Ten captured the Commissioner’s Cup, winning 8-6.

Although it is early in the season, Miles Bridges is on pace to have one of the most productive freshman seasons in Michigan State history. Bridges’ scoring average of 17.4 points per game is the best ever for a Spartan freshman, slightly better than Earvin Johnson’s 17.0 PPG in 1977-78. Only Greg Kelser (9.6 RPG, 1975-76) posted a better rebounding average than Bridges’ current 8.7 average.

Grayson Allen showed what he is capable of when healthy — and then went down with the latest in a run of injuries for No. 6 Duke.

Allen scored all 21 of his points in the first half, and then injured a toe late in Duke’s 93-58 rout of Michigan State on Saturday.

Allen, who has been playing through a right foot injury suffered in last week’s loss to No. 5 Kansas, appeared to tweak that foot or ankle when he went down while going for a rebound with about 12 minutes to play and Duke leading by 35. He stayed on the bench for the rest of the game.

Allen was not available for comment after the game because he was receiving treatment, team spokesman Cory Walton said.

“He just landed funny, and when that happens, it hurts,” coach Mike Krzyzewski said. “It really hurts. He looked fresher in that first half than he has the entire season, and hopefully we’ll get there by Tuesday night” when No. 24 Michigan State visits.

Luke Kennard added 18 points, Amile Jefferson, and Frank Jackson each finished with 15 for the Blue Devils (6-1), who have won four straight but once again must deal with an injury to a key player. Duke also has been without three injured freshman big men due to injuries and Krzyzewski says those three will not play against Michigan State either.

Kelvin Robinson scored 12 points for the Mountaineers (2-3), who average 89 points but for the first time were held to fewer than 70.

Allen started shooting the ball better in his last game, hitting three 3s in a rout of William & Mary on Wednesday night, and he picked up right where he left off.

He led the way during an opening half in which Duke scored a season-best 55 points and used a 24-12 burst to push the lead into the 20s. Allen keyed the run with two of his four 3s, and Jackson capped it with a layup that made it 53-31.

In its last game, Michigan State spent the first 30 minutes playing with energy and building a huge lead, then the last 10 nearly giving it all away.

Still, the 24th-ranked Spartans came away from the Battle 4 Atlantis with a win – and the end of a brutally tough opening month of the schedule in sight.

Eron Harris added 13 points for the Spartans (4-3), who bounced back from Thursday’s loss to No. 20 Baylor in a game that left coach Tom Izzo saying his injury-hit team looked ”awfully tired” and maybe a bit overwhelmed by the early schedule.

But the Shockers couldn’t quite push ahead. Bridges and fellow freshman Cassius Winston hit key 3-pointers. And when the Shockers had one more chance to tie it, Smith missed a long straightaway 3.

Duke leads the all-time series against Michigan State, 10-2, including a 2-0 advantage on a neutral court. Six of the last seven meetings in the series, and eight of the last 10, have all been decided by 10 points or less. The two ACC/Big Ten Challenge games at Cameron Indoor Stadium have been decided by seven points or less. Duke is 3-0 against MSU in the ACC/Big Ten Challenge. The Spartans’ last win in the series was a 78-68 victory in the Sweet 16 of the 2005 NCAA Tournament in Dallas.

In their last meeting, No. 1 seed Duke defeated No. 7 seed Michigan State, 81-61, on April 4, 2015, in the Final Four in Indianapolis. MSU jumped out to a 14-6 lead, but Duke took the lead midway through the first half. A 27-8 Blue Devil run had DU’s lead at 33-22 with 2:37 left in the opening half, as Duke controlled the rest of the contest. Denzel Valentine led all players in both scoring (22 points) and rebounding (11 rebounds). Justise Winslow led Duke with 19 points, while Jahlil Okafor scored 18 and Quinn Cook had 17.

In terms of overall statistics, Duke overwhelms MSU in most all categories. Some stats of note include scoring margin, rebound margin, FT%, & most particularly TO/GM (Margin) where Duke far excels as MSU turns the ball over at a very high rate.

When it comes to effective field goal percentage (eFG%), the teams are evenly matched. However, Duke far exceeds the Spartans in all categories including a large lead in offensive rebounding.

The key for Duke in this game is to maximize the advantage they have in the post. Amile Jefferson, Chase Jeter and possibly Antonio Vrankovic could have big games for Duke against an ailing Michigan State front court. Michigan State also has been shown to be a poor free throw shooting team this may come as a useful tool for Duke should the game become close in the waning minutes. As a team Michigan State shoots around 60%.

This is a very talented Michigan State team, but this will be the first time these young Spartans play a true road game. Oh, and Cameron Indoor is arguably the toughest place to play in college basketball. Not to mention the Spartans lack overall depth and have had some close calls already with a near loss to Florida Gulf Coast and a blowout loss to Baylor after leading by double digits at one point. Duke’s balance, scoring depth, and help from the home crowd should result in a Blue Devils double-digit victory, 88-77.