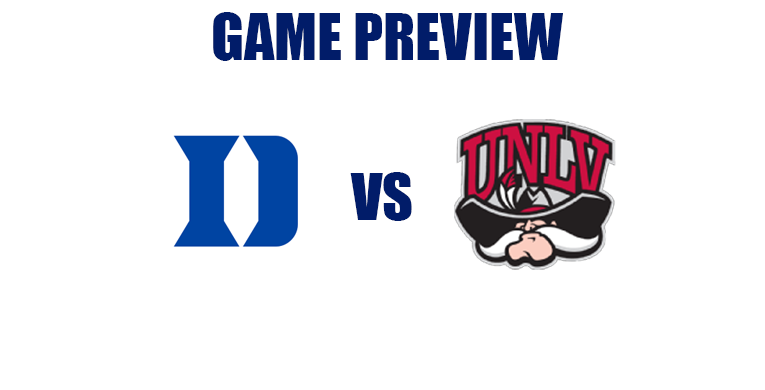 By Randy DunsonDecember 9, 2016No Comments

The first college basketball game at T-Mobile Arena will pit No. 5/4 Duke against UNLV on Saturday, the first meeting between the two programs since the 1991 national semifinal. The Blue Devils own a .772 winning percentage (250-74) in neutral settings under head coach Mike Krzyzewski. Duke is 3-1 on neutral courts this season. The Blue Devils have won the third-most games (219) and have the fourth-best winning percentage (.820) in the nation this decade. In Duke’s last three games, Amile Jefferson is averaging 20.3 points and 12.3 rebounds while shooting .703 (26-of-37) from the floor.

The game is a part of the fourth-annual MGM Grand Showcase, which benefits Coaches vs. Cancer. The previous three Showcase games were all held at the MGM Grand Garden Arena. This will mark UNLV’s third straight year playing in the event (vs. Utah in 2014 and vs. Oregon in 2015). UNLV opened the season with six straight games at the Thomas & Mack Center, going 4-2, and split in its first two games on the road – an 89-81 win at Southern Utah on Nov. 30 and a 97-73 loss at Arizona

State last Saturday. This will be the Runnin’ Rebels’ first contest of the year on a neutral court. UNLV sophomore guard Jalen Poyser led the Runnin’ Rebels in scoring at ASU with 20 points, marking the third time this year he has scored at least 20 in a game. Poyser leads UNLV in scoring on the season at 17.5 PPG, which ranks third in the Mountain West.

Almost everybody in Madison Square Garden was impressed with the game Amile Jefferson had for No. 5 Duke. Nobody appreciated it more than Blue Devils coach Mike Krzyzewski. Jefferson set career highs with 24 points and 15 rebounds to lead Duke to an 84-74 victory over No. 21 Florida on Tuesday night in the Jimmy V Classic. “Amile played one of the great games,” Krzyzewski said. “God bless him. He was fantastic.”

Luke Kennard scored 29 points and freshman Jayson Tatum added 22 for the Blue Devils (9-1), whose only loss was to Kansas on this same court in the Champions Classic in November. “Luke’s played fantastic,” Krzyzewski said. “When you get 29 points on 16 shots — what he’d have, 35 against Maine? Really efficient. He’s come through for us beautifully. He’s starting to put it together a little bit.” Twice in the final 8 minutes the Gators (7-2) got within seven points but both times Kennard scored to hold off Florida, once with a 3-pointer and again with a long layup off a steal.

Shannon Evans II scored a season-high 28 points and Arizona State tied a school record with 18 3-pointers, coasting to a 97-73 win over UNLV Saturday night. Evans, Torian Graham, and Tra Holder combined to make 15 3s, with Graham hitting six as part of his 22 points. The Sun Devils scored 19 points off 12 Rebels turnovers and led by as many as 30 points. Holder added 20 points and Arizona State shot 49 percent from the field.

ASU used an 11-0 run to take a 20-6 lead in the first half, with Graham and Holder hitting a pair of treys during the run. The Rebels cut the lead to five, 34-29, on free throw by Jalen Poyser with 4:15 left, but the Sun Devils closed out the half on a 17-3 run and stayed in control the rest of the way.

Thirteen of Arizona State’s 17 first-half field goals were from long distance. Maurice O’Field took ASU’s 36th 3-point attempt with 17 seconds left, but the effort came up short of both the rim and the record

The two iconic programs have not played since the two teams battled in consecutive Final Fours in the early 1990s. This will mark the fourth overall meeting between UNLV and Duke in men’s basketball. UNLV leads the all-time series 2-1. UNLV captured the school’s lone national championship by beating Duke by a national title game-record 30 points in the 1990 Final Four.

The following season, the Runnin’ Rebels started the season 34-0 before facing Duke in the national semifinals in Indianapolis. In one of the most monumental upsets in NCAA Tournament history, the Blue Devils knocked off the Runnin’ Rebels 79-77 and then won the first national championship for Coach Mike Krzyzewski two days later. UNLV is 19-18 all-time against teams that currently make up the ACC.

It seems the Duke Blue Devils are as advertised with a hefty 9-1 record with the ACC title already in their sights. The Blue Devils can score and defend which we saw during their seven game winning streak that was capped off by an 84-74 victory over SEC power Florida as a 7.5 point favorite on Tuesday where a ten point margin at the break held up. Duke limited the Gators to 43% from the floor and countered at 53%, which was good for six more buckets then UF. Luke Kennard gave the Blue Devils a game high 29 points on 11-16 with 24 points and 15 rebounds coming from Amile Jefferson while Jason Tatum netted 22 points and snagged eight boards.

In its last game, Duke leaned heavily on the hot-shooting Luke Kennard and the imposing Amile Jefferson against the Gators. Kennard pounded out 29 points on the strength of an 11-for-16 shooting from the field, which includes five treys on seven attempts. Kennard is surprisingly the best scorer on the talent-laden Duke squad, as he is averaging 20.4 PPG on 52.2% FG%. Jefferson, meanwhile, had 24 points and 15 rebounds to go with four blocks in a terrific display of two-way basketball.

The talent goes deeper than just Kennard and Jefferson with the likes of Grayson Allen and Jayson Tatum also on the roster. Tatum came off the bench in the Florida game and poured in 22 points.

This depth is going to be hard to match for the Rebels, whose 200th I ranked defense is about to face Duke’s offense that is manufacturing 85.5 PPG and is ranked No. 1 by KenPom in terms of adjusted offensive efficiency.

The experts say the UNLV Rebels are not going to challenge in the Mountain West and are in more of a rebuilding mode then anything. The Rebels are 5-3 and have been all over the map and hard to pin down. UNLV comes off of a 97-73 defeat at the hands of Arizona State Saturday as seven point underdog. The Rebels trailed by 19 after 20 minutes and could get no closer on 39% shooting while the Sun Devils connected at 49% and sank 18-36 from beyond the arc. UNLV leaned On Jalen Poyser and his 20 points with Tyrell Green pumped in 19 points and grabbed nine rebounds. The Rebels received 12 points from Kris Clyburn and Dwayne Morgan contributed eleven points and nine boards.

The Rebels will look to avoid losing to another group of devils this Saturday, as they host Mike Krzyzewski and the Blue Devils this Saturday. UNLV was denied of a three-game win streak last week, when it lost to the Arizona State Sun Devils 97-73 last week.

The Rebels simply had barely anything going for them on offense against Arizona State. They shot 38.9% from the field and went just 6-for-22 on their threes. They were already behind by 19 at the half and weren’t able to cut the deficit down to a single digit the rest of the way. Defensively, the Rebels let Arizona State hit 18 threes and shoot 49.2% from the field overall.

UNLV doesn’t have the firepower that Duke has so it will have to avoid engaging the Blue Devils in a shootout. Slowing down the game’s pace and winning the rebounding battle would be crucial for the Rebels, who are 51st in Division I ball with 40.1 rebounds per game. Jalen Poyser, who scored 20 points against Arizona State, is the Rebels’ leading scorer this season with 17.5 PPG.

As with the Florida game, UNLV is facing a Duke team that is close to being 100 percent healthy. Tatum and Bolden add more size and depth to a team that was playing with six and seven players. UNLV does not have the offensive firepower to keep up with a team that is now loaded with talent and experience. Therefore, I see Duke pulling away for a 87-62 victory.