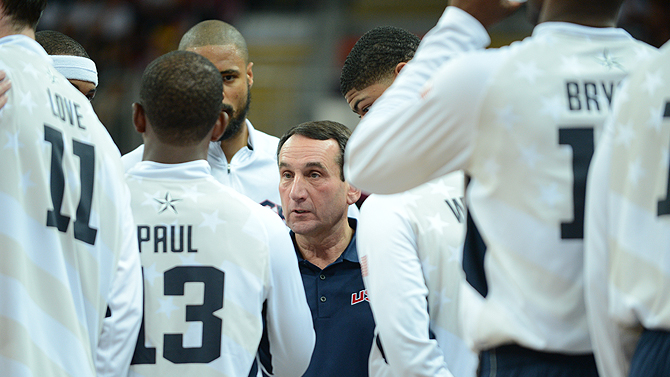 By Brian HoraceAugust 13, 2012No Comments

Congrats to our very own Coach K for guiding and coaching the U.S. Men’s Basketball team to another gold medal in the London Olympic Games. Taking a team of NBA players without enough preparation time, in a game there the rules are different, where the officiating was spotty at best, and with the weight of the world on them, gold was struck and it never gets old. A 107 – 100 win against Spain was closer than anyone would have liked but not completely unexpected, it made for a classic match of the 2 best teams in the world.

People who assumed that the U.S. would run away with this game were not in London in U.S. jerseys and not on the U.S. coaching staff. Spain clearly had not been playing its best ball during the tournament, either by choice or by just bad luck but they knew against the U.S. they needed to turn it on and they did. 16 lead changes and six tied scores later the U.S. saw itself on the medal stand in the winners position. The U.S. was tested time and time again.

Clearly playing a less athletically dependent style of basketball Spain used craftiness and big bodies down low to counter the American attack. Spain was able to control tempo and get the U.S. in foul trouble. When the game pressure was on the U.S. was able to punch back at every run the Spanish team threw, there was no panic and a lot of that you can attribute to some closer than expected games through the tournament.

A 10-2 run early in the fourth gave the U.S. some breathing room then Lebron took over in the final minutes of the game to stamp the victory, getting an open path to the lane for a dunk and hitting a 3 point shot right in the face of Marc Gasol to seal the deal.

In his final Olympic appearance Kobe Bryant scored 17 points off of 5-10 shooting, Lebron James added 19 and Kevin Durant was the pace setter with 30 points. Spain had its own volume scores with Marc and Pau Gasol scoring 17 and 24 points respectively and Juan-Carlos Navarro scoring 21.