By Brian HoraceFebruary 18, 2016No Comments 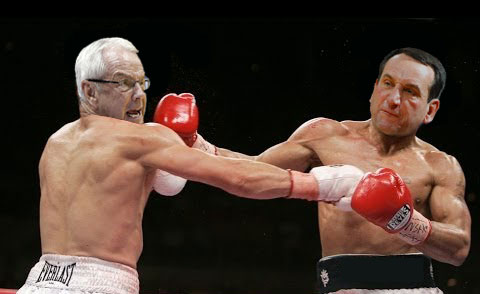 Wow what a game in Chapel Hill tonight. The Devils walk away with a road victory against the number 5 team in the nation and their arch rivals 74-73. It was a grudge match the entire game although the Tarheels would maintain control until the waning moments of the second half.

I tweeted earlier that I didn’t want to hear shit about Duke not having heart and that win or lose I was happy with how this team played. I’m not sure I expected such a good game from Duke against UNC. I knew that if Duke could A. Hit their 3’s and B. Keep the game close and within striking distance they would have a really good chance of winning. Duke took multiple shots to the gut and responded each and every time with a run. As well as UNC rebounded and pounded Duke in the paint it had to be completely discouraging to not be able to punch in a double digit lead.

Duke would withstand and answer each and every UNC run before taking the lead late in the second half. For UNC Brice Johnson was mister everything scoring 29 points and pulling down 19 boards. Unfortunately for UNC there wasn’t much else for UNC offensively sans Justin Jackson with a 13 point effort. Duke used a more balanced attack with Brandon Ingram scoring 20 on 7-21 shooting, Grayson Allen with 23 on 7-18 shooting, Marshall Plumlee with 11 on 5-5 shooting and freshman Luke Kennard with 15 on 6 of 9 shooting. UNC dominated the Blue Devils in points-in-the-paint, holding a 52-34 advantage. Duke would counter with point off of turnovers (13-2) and in 3 point fields goals where UNC went 1-13 and Duke shot an impressive 7-19 which equates to a 21 to 3 advantage in points.

UNC had a decisive advantage on the boards in the first half of he game living off of Brice Johnson’s offensive rebounds (24-15). In the second half UNC still had the edge in rebounding but Duke shored up it’s efforts despite a smaller team (22-19).

Duke defensively was not great but when it counted, when they needed stops near the end of the game they got them. When they needed a rebound they got it. The win marks Dukes 5th straight win and its 3rd in a row against a ranked opponent. Remarkably for the Duke Blue Devils Duke did all of this using 5 players after junior Matt Jones went down in the first half with an ankle injury. Duke did not sub any players for the final 10 minutes of the game. Tired legs and all Duke would prevail.

Have to say hats off to Brice Johnson for a monster game, dude is a player and possibly the best in the ACC.