By Brian HoraceApril 13, 2015No Comments 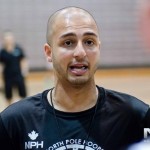 The mandate for NorthPoleHoops.com is to build the Canadian basketball culture while inspiring student-athletes to work hard, push their limits to achieve success on and off the hard wood.

A little background on Tariq Sbiet:

Discovering talent from coast-to-coast, while absorbing knowledge at every opportunity. Tariq has covered the game at every level, combining a basketball and media background with a degree in Media & Journalism from the University of Guelph-Humber.

Jamal Murray has received interest from 3/4 programs in Final 4. Says he had Duke in his bracket. #BlueDevils