By Brian HoraceSeptember 15, 2014No Comments
I’ll bite on this one Yahoo, why not take an unnecessary shot at Coach K, whatever gets you some shine. Why, with all that’s going on in the world of sports you decided to toss this garbage out there? If you want to write about something shady or dirty there are stories out there – the NFL has plenty of them. Yes, the U.S. won the FIBA tournament in convincing fashion but did they play flawless basketball? No. There were teams that stayed with the U.S. for a quarter or a half and if Spain had not been upset by a ragtag French team the U.S. may have very well had its hands full. Did you actually watch the tournament or just focus on the lopsided scores? Never mind that this tournament is about sending the best players that you can. When you don’t send your best available you do a disservice to the game and insult the other teams. The game is growing in other countries, even if the scores are a bit lopsided. These games evoke a tremendous sense of pride in the players and God forbid they can once again play the game purely for the love of the game and for the love of country. I would not be opposed to blending younger talent with veteran talent in some form or fashion but as long as other teams are sending their pro players-their best players-so should we. Of course it isn’t going to draw the same interests and the NBA Summer League or an NBA event, that’s not the point. It’s not about who’s watching, it’s not about ratings – hardcore basketball fans will watch. Fans in other countries are watching and the game is becoming more popular globally, if you can’t understand that and the importance of that then you are short-sighted at best. Did you harp on John Calipari for coaching the Dominican team to land a top 5 recruit? Probably not, but you’ll name drop him in your article as possibly being annoyed for something that hasn’t happened. Classy move sir.

Of course there is a risk of injury but to think these players won’t be playing somewhere, somehow – come on. These players are being coached, getting better, staying in shape and learning the finer points of the game. Players are going to get hurt but that will happen regardless. Shelving players for the summer and thrusting them into action is just as dangerous.

I remember not too long ago that Coach K accepting the Team USA gig would “hurt” Duke… Now it’s become ONLY a benefical move for Duke. — Chad Lykins (@CLykinsBlog) September 15, 2014

I’m aware of the acutely cynical nature of the media, especially sports media but could it possibly be, just maybe, that the players and coaches are trying to promote the game and also represent their country? Ask an Olympian, it’s a completely different game when you are playing for your country and if you can’t understand that then you are lost. And sure Coach K may reap some benefits from this but to think this was some recruiting power play is ridiculous and you are better than that. Coach K needs no bigger stage or pipeline for recruits. He puts guys in the NBA and some in the foreign leagues as well, he teaches, he coaches, and nearly every Duke game is on national television. You are reaching if you think this was about a recruiting advantage. If Coach K’s tenure in USA Basketball was ultimately unsuccessful would you still make the same claims?
The only self-aggrandizing or self-promotion going on is in your own sports department. 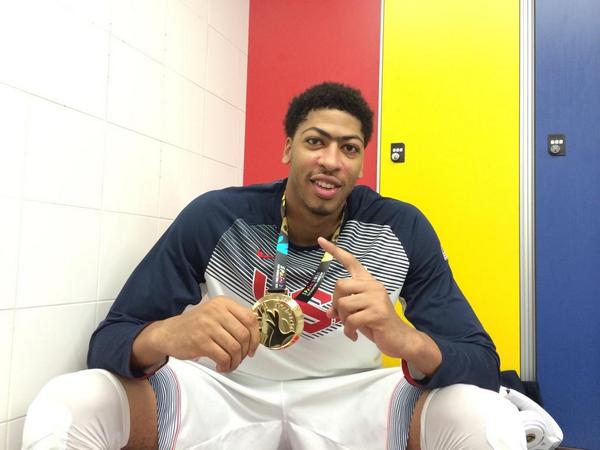