By Brian HoraceFebruary 22, 2014No Comments 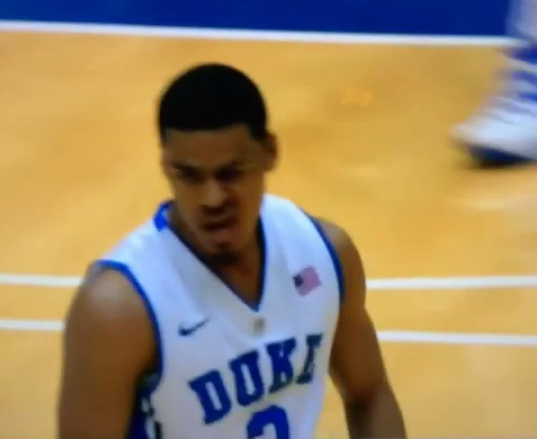 Wow. As Duke is prone to do in big games, we were all on the edge of our seats as Duke took down Cuse 66-60 on a controversial call at the end of the game…sound familiar? For Duke, this time, the call went their way.

This game did not lack the drama of the first but it did lack the stellar play, don’t get me wrong, there were some great plays on both ends of the court, but the level of execution did not match the first game. This is definitely a rival in the making and I cannot wait to see round 3.

Duke rallied back from a 9 point deficit in the first half to tie the game and the first half ended in a draw. Duke lost the turnover battle as well as the rebounding battle in the first yet made shots when they needed to in that first stanza.

The second half was a different story for Duke, after taking the lead back the Blue Devils were in a tug of war with Cuse for most of the second half. Duke finally found the opening it needed in the zone but putting Rodney Hood in the middle to take advantage of his mid-range and driving ability. Hood would score 13 in the game and my favorite stat of the game for Hood he pulled down 7 boards. A stat I had personally been throwing chicken bones and voodoo spells to improve. Duke also got 19 from Jabari Parker, Parker went 6-9 from the field and 3 for 3 from beyond the arc, shaking off some first half issues with his ball-handling. Parker would have 4 turnovers in the first half but only 1 in the second. Duke got a huge lift off the bench from Marshall Plumlee who would score 4 points and pull down 5 rebounds to go with 3 blocks in 19 minutes of play.

Not to be overlooked was the play of Rasheed Sulaimon who gave Duke 9 points. Most impressive about Sulaimons performance was his 7 assists to only 2 turnovers. To put that in perspective the entire Syracuse team had 8 assists.

Duke played terrific perimeter D against Syracuse holding freshman Tyler Ennis to 9 points on 2-13 shooting and Trevor Cooney to 4 points on 1 for 5 shooting. Where Duke had trouble was again in the paint. Jerami Grant would score 17 and pull down 8 boards and CJ Fair would score 12 and pull down 7 boards. Duke would lost the rebounding battle to Cuse by 3, but would out-rebound the Orange by 2 in the second half.

In the waning seconds CJ Fair would drive along the baseline and Rodney Hood would get there to draw the charge and if you are a Duke fan it was a charge, if you are a Syracuse fan it was a block. The refs saw it as a charge and Boeheim went off. Stormed onto the court and blasted the ref with a few choice expletives and was tossed out of the game after receiving two technicals. A few foul shots later and you have it. 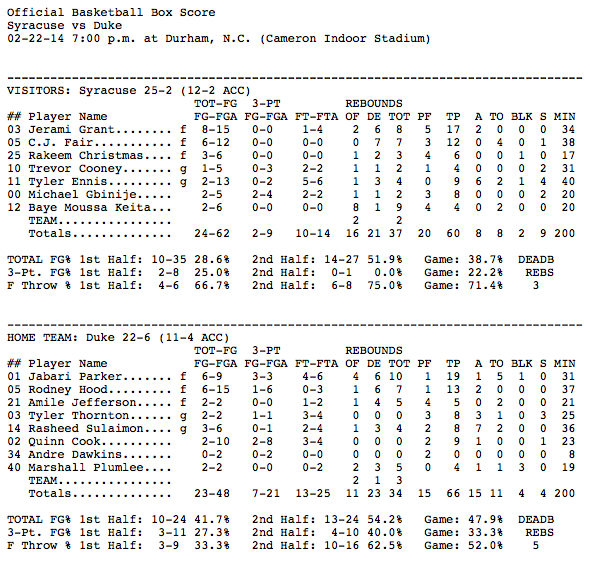 The good for Duke besides the win itself…

Duke won the war of fast break points 9 to 3, Duke barely won the bench points (by 1), and second chance points 14 to 10 was again in Duke’s favor. Also going 3 and 1 in this tough stretch of games (four games in eight days). I wonder if any team has done that this year, and if they have what was the result?

The bad for Duke…

Free throw shooting for the second game in a row was horrific, just 52% for Duke in this game. Shooting the three was again not a positive for Duke, and while they did hit shots down the stretch, overall just 33% for the game. Losing the rebounding battle is becoming an all too familiar so no surprise there, but losing by 3 is not all that bad.

…more later, time to enjoy this one.