By Brian HoraceNovember 30, 2020No Comments 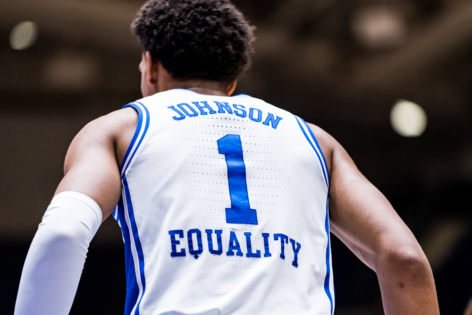 Duke freshman Jalen Johnson has been named the ACC Freshman of the Week coming off a record-setting performance in his college debut on Saturday.

In the Blue Devils’ season-opening win over Coppin State, Johnson scored 19 points, grabbed 19 rebounds, had five assists and blocked four shots in 35 minutes. The Milwaukee, Wis., native became the first Duke player in history to post a stat line of 19+ points, 19+ rebounds, 5+ assists and 4+ blocks in a game. He finished the game a perfect 8-of-8 from the field and 2-of-2 from the free throw line, setting a Duke freshman record for the most points in a game with 100-percent shooting.

Johnson joined Wisconsin’s Ethan Happ as the only power conference players in the last 10 years with 15+ points, 15+ rebounds, 5+ assists and 4+ blocks in a game. Through games played on Nov. 28, Johnson’s 19 boards are the most by any freshman in a game nationally this season. His rebound total marked the third most ever by a Duke freshman, while his 15 defensive rebounds set a Blue Devil rookie record.

Over the last six-plus seasons, Duke has had an ACC Freshman of the Week in 62 of a possible 126 weeks. Johnson becomes the 16th Blue Devil to have won the award at least once in that time.