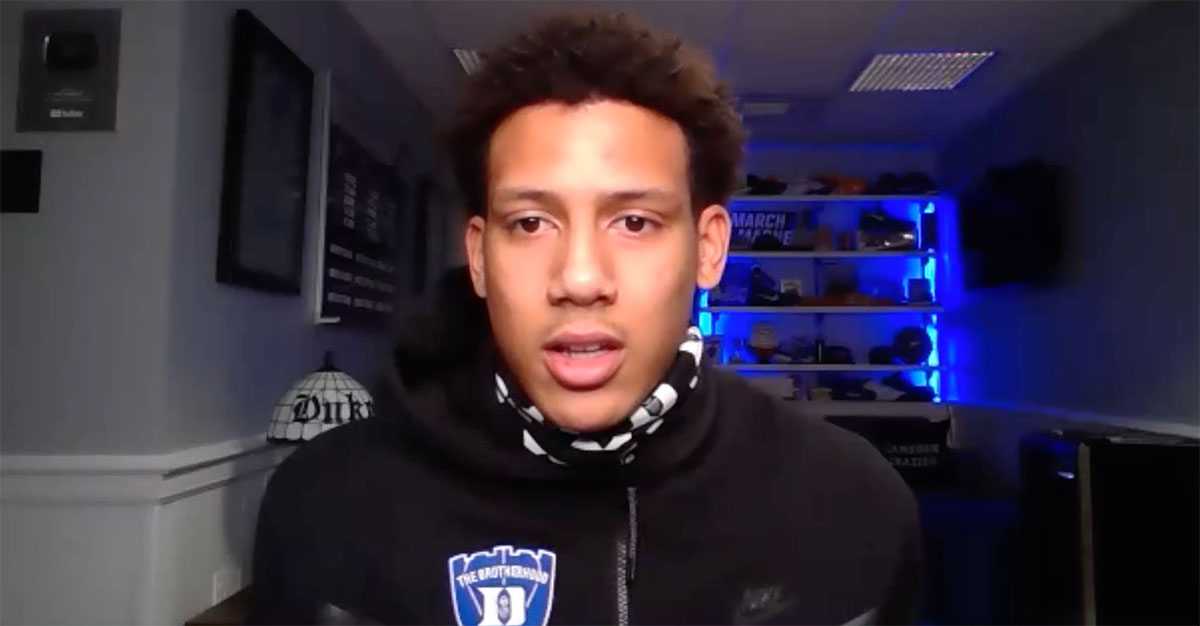 By Brian HoraceNovember 18, 2020No Comments

Jalen Johnson was a preseason first-team All-ACC pick and named to the watch list for the Julius Erving Award, entered Duke as a five-star small forward. He was ranked as the No. 12 overall player in this freshman class by ESPN and was the No. 1 player from the state of Wisconsin. The freshman touched on a number of topics, ranging from Duke’s versatility as a team, to his development as a passer, on his preseason All-ACC selection and his goals for the season.

On how he sees his role when playing alongside sophomore Matthew Hurt: “Playing with Matt Hurt so far has been great. He makes the game so much easier. He’s also another versatile big man kind of like myself. He can do a whole bunch of things on the court, so being on the court with him at the same time is just really fun. We complement each other’s games pretty well. We know when each other is hot, so I think we play very well together.”

On how he developed his passing ability and if he would consider himself a pass-first player:
“I wouldn’t necessarily call myself a pass-first guy. It’s something I love to do though, for sure. Growing up, I really wasn’t always as tall. I was tall, but just kind of being able to have those guard skills that my Dad always taught us early on in our early ages – just having those guard skills and guard vision, being able to have that type of stuff will be able to help me down the long run.”

On the prospect of not having fans:
“Fans or not, it’s my biggest dream to just being able put on that Duke Basketball Jersey, I think thats going to be more special that anything itself. Of course I’d love to have the Cameron Crazies in for sure unfortunately things aren’t going that way and looking too promising, but I’m just really looking forward to putting on that Duke jersey I think thats the thing I’m most excited for, I know the fans have been great at Cameron but really it’s just Duke Basketball, being able to put on that jersey for the first time, it’s going to be really special for me.”

On how his versatility helps the team:
“I think honestly, my versatility is just going to open much more for the great scorers, the great three-point shooters we’ve got on our team right now. My versatility, like I said, just opens up so many opportunities and options on the floor. It helps me create for others and myself because I think my versatility – not many people expect me to do some of the things that I’m capable of doing, so I think it will catch some teams off balance, off guard.”

“My dad always tells people he was stuck in the post as a 6’6 big man really, and that’s something he didn’t want for his kids. I remember our first basketball drill, full-court ball handling so just kind of being able to have those guard skills like I mentioned earlier was something he always preached on and he didn’t want us being stuck in the post at 6’8 or however tall we ended up being.”

On his ability to guard multiple positions on the defensive end:
“Like I said, growing up, I wasn’t always the tallest on my team so I was used to guarding guards. Then, 10th grade summer came around and I grew to 6’7, 6’8, so it was kind of like a shock for me. I’m still in a way getting used to my body and getting used to how tall I really am and how strong I am. I think that’s going to be definitely an advantage for me, guarding one through five this year.”

On being isolated from other students due to COVID-19 during his transition to college:
“Personally, I feel like it’s just better for me overall. I think it gives me more of an opportunity to lock in, just from the overall standpoint – basketball standpoint, school standpoint. It’s definitely different, I’d say. It definitely wasn’t something I expected coming into Duke or prior to COVID. I think we’ve all adjusted well. Duke has done a great job with adjusting as well, so it’s been great so far.”

On freshman Henry Coleman III being a vocal presence on the team:
“I think Henry is just way mature beyond his years. You would think he’s a senior in college by the way he talks. He communicates, he’s a great leader – that’s exactly what he is. He’s our leader. We needed that. I wouldn’t say he’s the leader, but he’s one of the main guys that are stepping up in the vocal aspect of things. He’s just great to be around. He’s a great guy, always cracking jokes and it’s just great energy around him that a lot of people attract to.”

On what the adjustment is like coming in with a freshmen class that has other five-star recruits:
“I think the thing that separates us six freshmen that came in from anybody else – we knew what we were coming in for and what we were buying into. We’re not coming into this for individual accolades. We came in this together and everything will take care of itself. I think that’s what separated us from other people or other classes in the country, just kind of knowing everyone is talented around you and not having that ego coming in, getting rid of the egos at the door because we all know Coach K doesn’t play that. So just kind of knowing what to expect when you come in and things like that.”

On being the lone player on the team to be named first-team preseason All-ACC:
“It’s a great thing to see, but like I said before, it’s not something I’m focused on. I’m a firm believer in do the team things first and the individual accolades will take care of itself. I’ve always believed in that, so I’m just going to continue to believe in that and let everything take care of itself. I’m not going to pay attention to much of this preseason stuff. Once again, it’s preseason and at the end of the day, I want that sixth title, so whatever it takes.”

On the biggest growth in his game:
“I think the biggest growth so far is probably my playmaking I think thats come a long way because now I’m playing with other 5-star prospects and they really just bring my game up in all aspects because it pushes me. Really, there’s no plays you can take off because it’s constantly people coming at you.”

On what areas he wants to improve in during the season:
“I think just everything. I think everything has been making strides in the right direction, to say the least. My jump shot has been making strides. It’s constantly gotten better. I’m not going to sit up here and tell you guys I’m making 35-40 in a row right now because that’s not the truth, but I’m constantly getting better every day. That’s all I’m really looking for. I’ve noticed my lateral quickness has gotten much better. I’m turning into more of a defender, starting to take more pride in the defensive end, so just really enjoying the process more than anything.”