By Brian HoraceDecember 13, 2016No Comments 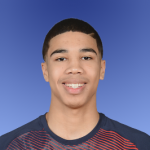 In his first full week of competition this season after recovering from a foot injury, Tatum averaged 17.5 points on .522 (12-of-23) shooting from the floor while chipping in 6.5 rebounds, 2.0 steals and 1.5 blocks per game in Duke’s two wins. He was a perfect 10-of-10 from the free throw line on the week.

Tatum’s coming out party took place on a national stage against No. 21 Florida on Tuesday night at the Jimmy V Classic as he reeled off 22 points on 7-of-12 (.583) shooting, including 16 points in the second half. He also added eight rebounds and a pair of steals. The effort marked the first 20-point game of his career.

On Saturday, Tatum came off the bench for 13 points, five rebounds, three assists and two blocks as Duke dismantled UNLV.

The St. Louis native has scored in double figures in each of the three games he’s played since returning from injury.

Duke is idle until Dec. 19 when it hosts at 7 p.m. ET Tennessee State in its non-conference home finale. ESPN2 will televise the game and the radio call will be available on the Blue Devil IMG Sports Network.