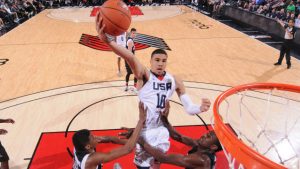 Finishing his second year in the Association with the Celtics, Tatum averaged 15.7 points, 6.0 rebounds and 2.1 assists per game in 2018-19. The former Blue Devil standout also shot 85.5% from the charity stripe and 37.3% from beyond the arc in helping lead Boston to the Eastern Conference Semifinals.

Following the Las Vegas camp, which concludes with a USA Blue versus USA White exhibition game on Aug. 9 at the T-Mobile Arena, the selected finalists will reassemble in Los Angeles and train Aug. 13-15, then play an exhibition contest versus Spain at the Honda Center in Anaheim on Aug. 16. The official, 12-member roster for the 2019 USA Basketball Men’s World Cup Team will be announced on Aug. 17.