By Brian HoraceFebruary 21, 2014No Comments
I’m not quite certain why this team played like a shell if itself against North Carolina. I understand being beaten by a better team that happens to all teams but if you can’t look at your own individual performance and say, “I did all I could to win this game”, then  there is a problem. No player or team is perfect, shots are missed, calls are missed, tutelage forgotten, fatigue sets in – all of these things happen. For Duke all of these things happened at once. The unfortunate part of that is that it was coupled with a lack of basic basketball 101. 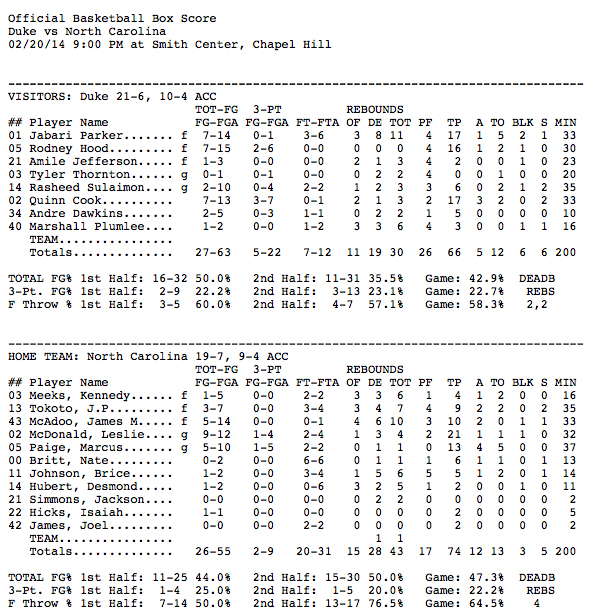 Rebounding:
Duke is undersized, no one disputes that, but when that is the hand you are dealt you have to be more engaged in rebounding, you have to expend more energy at that part if the game. You cannot just say, “oh well, they are bigger, let’s just  out shoot them.” I’ve said it all year long size is great to have for rebounding but as we all have seen on many occasions a listless big man can be out rebounded by a determined guard. It’s about desire, positioning and attentiveness. I cannot believe this isn’t stressed in practice. There is no way this isn’t worked on. Right? I love guys that can make shots but shots don’t always fall, what happens when they don’t? UNC certainly seemed to have those answers.
Zone Busted:
Duke worked on playing against the zone. Really? They actually practiced playing against the zone. Watching that offense you would think that UNC had 12 defenders out there. Last night was the ugliest I’ve seen the offense in a very long time. I refuse to believe that the answer the coaching staff had for the zone was to just chuck up threes. Nope. No way. Especially on short rest, Duke played right into UNCs hands instead if attacking the zone in the middle. I cannot for the life if me figure out why. If you are going to chuck up threes, why not let the ACC’s best 3 point shooter have a go at it? Andre Dawkins did not play much in the second half (1 minute), I can only assume it was for defensive reasons but then again, aside from Quinn Cook and in some stretches Marshall Plumlee, no one played great defense.
In The End
People are going to say that maybe UNC didn’t deserve to win this game, or that Duke gave then the game – Hell I said that, but upon further review Duke may have handed the game to UNC but UNC was tough enough down the stretch to take it. Duke didn’t sack up enough in this game to work on the weaknesses they have as a team. Nobody stepped up when the heat was on to grab a rebound or a loose ball. I have faith this team will get it together, I criticize because I love. I love what this team has, the parts are amazing but sometimes the sum just doesn’t add up to victory when it probably should.
…fair warning more may come later