A Look Ahead by Tyler Rizzieri

By Brian HoraceNovember 18, 2014No Comments 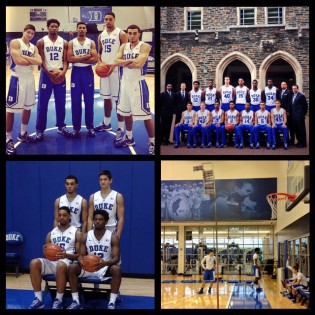 The goal never changes: Capture the National Championship. After a disappointing end to what looked like a promising season last year, Duke fans have even more to look forward to this year. The team instantly jelled with an NCAA best 30 assists in their first game, highlighted by six players scoring in double-figures. This roster goes 10 deep and is able to give every possible look to opponents. It could start the small guard rotation with T. Jones and Cook, surrounded by a physical frontcourt of Okafor, Winslow, and Jefferson. Duke could then switch it up to give a speedier, smaller lineup with T. Jones, Sulaimon, Cook, Winslow and Okafor. Then Duke could change to a shooting lineup with Cook, Allen, Sulaimon, Winslow, and Okafor. Last, and most importantly, Duke could insert a defensive lineup with Allen, Sulaimon, M. Jones, Ojeleye, and Plumlee. Because of the depth and different possible looks, I would expect the minutes of each individual to change game to game, depending on the strengths and weaknesses of each opposing team.

The depth of this Duke roster will certainly be needed as Duke plays 7 preseason Top 25 teams throughout the course of the year. This, coupled with the always-hostile ACC environment, could easily wear a team down by the time March rolls around. With this roster, it is crucial that there is shared playing time. If Coach K wants to press full-court all game, like he has done in the first two games of the season, it will only be as effective as the stamina of the players on the court. There is no reason that Duke should not be able to pull this off, however, without managed minutes, by March this team could get flamed out. However, given the skill level and maturity of the team, especially with the freshmen already looking like seasoned veterans, this team also has the potential to win it all.