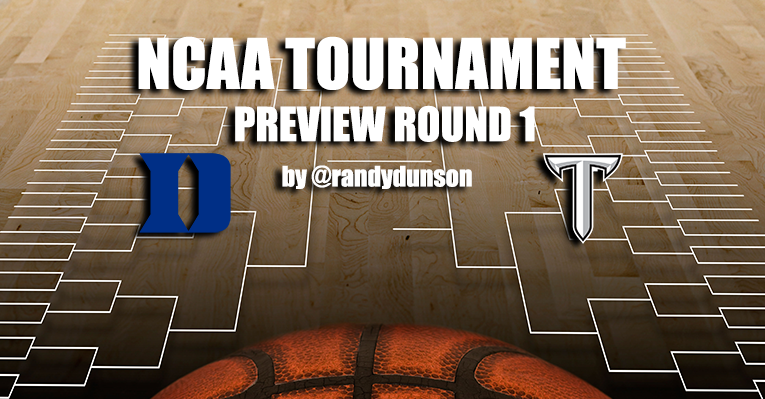 By Randy DunsonMarch 15, 2017No Comments

The ACC champion Duke men’s basketball program received the No. 2 seed in the East Region from the NCAA selection committee and will face Troy in the first round of the NCAA Men’s Basketball Championship on Friday, March 17, in Greenville, S.C.

Duke has never faced Troy in men’s basketball and owns a 13-1 overall record against teams that currently comprise the Sun Belt Conference.

The Blue Devils are 107-35 (.754) all-time in the NCAA Tournament, marking the best winning percentage in tournament history. Duke’s 107 wins are also third most in the event’s history and Coach K holds the NCAA record with 90 NCAA Tournament wins.

Duke capped an historic run to the ACC Tournament title with a 75-69 win over No. 22 Notre Dame on Saturday, becoming the first team ever to win four games in as many days to capture the ACC crown. Along the way, the Blue Devils defeated No. 10 Louisville, No. 6 North Carolina, and No. 22 Notre Dame, overcoming second-half deficits in each contest.

The ACC title was Duke’s record 20th crown and its record 14th under Krzyzewski. Coach K also established a new record for ACC Tournament wins in Brooklyn, running his total to 61.

The Troy men’s basketball team capped off the Sun Belt Tournament with a 59-53 win over Texas State to claim the program’s first ever Sun Belt Tournament title. The victory marked the second time in school history that Troy will be playing in the NCAA tournament and the first since 2003.

Wesley Person was named the Most Outstanding Player of the Sun Belt tournament after he scored 87 points in the four victories. Person had 16 in the clinching win over the Bobcats. The two 20-point wins to start the tournament marked the first time in program history Troy has won consecutive postseason games by double-digits.

Troy’s 22 wins were the most since 2009-10 and the 10 conference wins were the third most in Sun Belt history. Troy’s 13-win improvement from the previous season was the largest turnaround since the 1987-88 season.

In a season that has been anything but routine for Duke, the Blue Devils won the Atlantic Coast Conference Tournament, as it had never been done before.

-Jayson Tatum took over in the final three minutes, making key plays all over the floor, and No. 14 Duke became the first team to win the event with four victories in four days by rallying past No. 22 Notre Dame 75-69 on Saturday night.

The freshman forward finished a spectacular week in Brooklyn with 19 points and eight rebounds for the fifth-seeded Blue Devils (27-8). Duke won its first ACC Tournament championship since 2011 and its 20th overall, most in league history, and the 14th under coach Mike Krzyzewski.

“I’ve been on a lot of good journeys, but this was such a good one,” the 70-year-old Krzyzewski said.

Bonzie Colson was a beast for third-seeded Notre Dame (25-9), with 29 points and nine rebounds.

“It’s one of the great performances in championship game history,” said Notre Dame coach Mike Brey, the former Krzyzewski assistant who is now 5-4 against Duke with the Irish.

The Blue Devils came from double digits down in the second half to beat both No. 10 Louisville and No. 6 North Carolina to get to the finals at Barclays Center and then came from eight back with 11:35 left to defeat the Irish.

“Four games in four days is not an easy task,” Duke guard Grayson Allen said. “At the end of the day it was all emotion and heart getting us through those games.” And a lot of Tatum on Saturday night.

He made a running hook to give Duke a 65-62 lead, but Colson’s 3-pointer with 2:25 left tied it. Tatum hit one of two free throws to put Duke back in front, and then came through with the play of the night. Or make that, the plays of the night. He blocked Steve Vasturia’s drive to the hoop and then went coast to coast for a layup to make it 68-65 with 1:33 left. “I thought, `What are you doing?” Krzyzewski said about Tatum taking off with the ball. “Yes! You did it. How the hell did you do that?’ I thought it gave everyone energy.”

Matt Farrell pulled Notre Dame within two with a couple of free throws before Tatum showed off another skill, driving and dishing to Matt Jones for a 3 to make it 71-67 with 50 seconds remaining. It was Jones’ only basket of the game.

“It was the shot of the game,” Krzyzewski said.

Tatum then all but sealed it, getting behind the defense on an inbounds pass from Jones for a slam while being fouled. Tatum completed the three-point play for a 74-69 advantage with 25 seconds left.

Luke Kennard had 16 points for Duke and was selected tournament MVP, but it was really Tatum’s time to shine. He averaged 22 points and 7.5 rebounds in four games.

Troy led by just one-point with under two minutes to play, but the Trojans dug deep to topple Texas State 59–53 to win the Sun Belt Championship and advance to the NCAA tournament. The win marked not only the first Sun Belt tournament victory in school history but also the second NCAA tournament appearance in Troy’s prestigious program existence. After going into halftime leading 27-21, the Trojans (22-14) did not trail at any moment in the second half. The last time Troy was down was at the 10:06 mark of the first half. Despite the strong showing, the outcome was far from decided after a free throw by Nijal Pearson got Texas State (20-13) within range of taking back the lead in the final two minutes. That would never come to fruition as the duo of Wesley Person and Jordon Varnado—as they have done all tournament long—closed out the game on an 8-3 run to capture the championship.

Just 14 seconds after the free throw cut Troy’s lead to one, Varnado bullied his way into the paint to get a layup. On the following possession, Troy was able to force a turnover from Pearson that allowed the Trojans to burn nearly 30 seconds on the clock.

Texas State, which held Troy to two of the three lowest scoring outputs on the season, again turned the ball back over to the Trojans off an Immanuel King offensive foul with 23 seconds remaining. The Bobcats were forced to immediately foul, which sent Varnado to free-throw line where he calmly sank both shots. A long 3-point shot by Ojai Black was off the mark, Varnado was fouled again, and he connected on two more free throws to put Troy up 57-53 with eight seconds left.

Kavin Gilder-Tilbury, who was the leading scorer in the game with 19 points, hit a 3-pointer with eight seconds left, but it would be to no avail as Person scored the game’s final points on two free throws with four seconds remaining.

This is the first game between these two teams.

Except for a few categories, these teams are fairly even overall.

[If you wish to learn more about how the four factors are calculated and implemented, a description can always be found here, https://www.dukeblogger.com/four-factors-winning/.] [Note: Numbers in parentheses are D-1 Average]

Duke is by far the most efficient team in shooting the ball. The Devils also protect the ball better. Duke has a slight advantage on the offensive glass,.

Duke finished fifth in the ACC in the regular season at 11-7, but won the tournament title over Notre Dame from Brooklyn on Saturday night. Troy won the Sun Belt title, which gave them a berth to the NCAA Tournament for the first time since 2003. They finished in the middle of the pack in the league at 10-8. The winner of this game plays the winner of South Carolina/Marquette on Sunday.

Even though Troy was just an average Sun Belt team, they did win 22 games. They did not play an overwhelming non-conference schedule, but did play USC tight on the road (82-77). They did have 16 road games, winning just six, but at least they are not afraid of playing outside of Alabama. The had won two straight games heading into the Sun Belt Tournament as the sixth seed. They took apart Appalachian State (84-64), Georgia Southern (90-70), Georgia State (74-63), and Texas State (59-53) in the final on Sunday. Jordan Varnado led the Trojans with 18 points and 12 rebounds on 6-of-19 shooting (0-4 3PT). Wesley Person Jr. added 16 points on 4-of-12 shooting. The Trojans shot a miserable 1-of-17 from beyond the arc and 35 percent from the field. The Bobcats shot 41.7 percent from the field, but they turned it over 17 times, while Troy committed just five turnovers.

Even though Duke did not get a number one seed, they could certainly use that as motivation. The Blue Devils did not really click until head coach Mike Krzyzewski (90-32 in 32 NCAA appearances) returned from back surgery in early February. The Blue Devils won seven games in that stretch, but then lost two straight at Miami-Florida and Syracuse in late February. They bounced back to beat Florida State at home by five, but lost their regular-season finale at North Carolina, 90-83. But once again, Coach K got his troops together for the tournament and they beat Clemson (79-72), Louisville (81-77), North Carolina (93-83), and Notre Dame (75-69). They became the first ACC Tournament champion to win four games in four straight days. Freshman forward Jayson Tatum (6-8, 205) led Duke with 19 points and eight rebounds on 7-of-11 shooting. He was sensational in the ACC Tournament, averaging 22 points and 7.5 rebounds. But he was overshadowed by sophomore Luke Kennard, who scored 16 points in the title game and averaged 20 points in four games, earning player of the tournament. On the season, he averages 20.1 points per game and 5.3 rebounds on 50 percent shooting from the field (44.3% 3PT).

Keys to the Game:

Duke is considered by many as the favorite to win the NCAA title. But this is a squad that does not play the best defense and ultimately, that could be their downfall. They should beat Troy, but the Trojans are a scrappy team that will not be intimidated. Playing in South Carolina gives Duke a slight advantage, but it is almost a neutral game for both squads.

Can Duke keep its hot streak going all the way to a national championship? We are not sure but it will least go until Sunday. We cannot see Tatum and Kennard allowing Troy to become another version Lehigh or Mercer. Duke wins, 85-70.