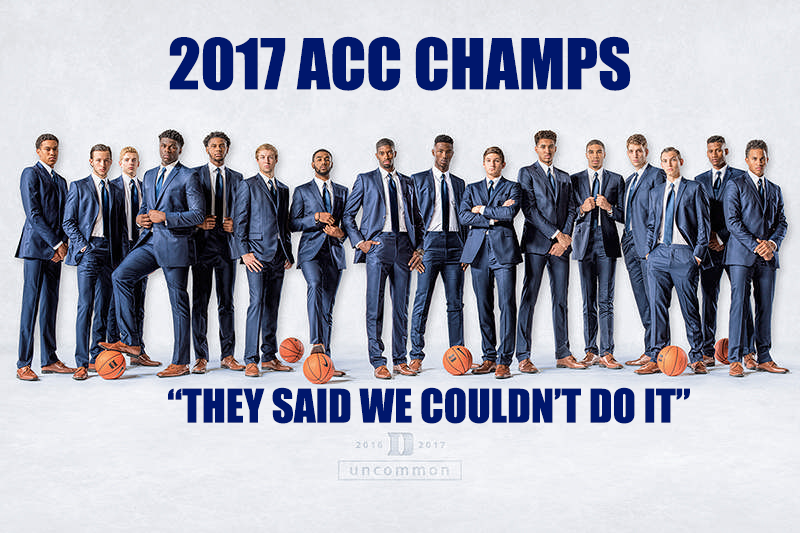 The Ceiling is the Roof and Duke is Hanging a Banner there as your 2017 ACC Champs; 75-69 Over Notre Dame

By Brian HoraceMarch 12, 2017No Comments

Duke is your 2017 ACC Champs after making history and coming in as a 5 seed and winning 4 games in a row. Duke never truly looked gassed during this amazing run of 4 games against the likes of Clemson, Louisville, UNC and finally Notre Dame. Duke had to come from behind in 3 of those 4 games adding to the degree of difficulty.

Duke and Notre Dame had what amounted to a heavy weight fist fight. Trading punches and showing exactly why they were the final 2 teams. In a game with 8 lead changes saw Duke end the half by allowing the Irish to trim an 8 point lead to just 4. Notre Dame would take the lead in the second half and extend it to as much as 8 before Duke battled back to take the tenuous lead that saw Duke get stops down the stretch.

Jayson Tatum was a man on both ends of the floor blocking Steve Vasturia’s drive to the hoop and then going coast to coast for a layup to make it 68-65 with under 2 minutes left. Matt Farrell, the Notre Dame point guard, pulled the Irish within two on free throws before Jayson Tatum drove and dished to much maligned senior Matt Jones for a 3 to make it 71-67 with 50 seconds remaining.

Bonzie Colson ate the Devils up inside, scoring 29 points and pulling down 9 boards on 12-21 shooting but Duke countered with a balanced scoring attack that included 14 by Amile Jefferson, 16 from sophomore Luke Kennard and 19 from Jayson Tatum. Duke was efficient on the offensive end shooting a hefty 60% from the floor but only 33.3% from 3 point range largely due to excellent defense from Notre Dame who chased Duke off of the line the entire game.

Duke was surprisingly efficient in the paint outscoring Notre Dame 44-32, but Notre Dame countered with a 20 to 5 edge in points off of turnovers. In the end Coach K told his players to play, be who you are, “The last 10 minutes of the game, we didn’t call a play. We just told them, you make plays.” Frank Jackson remarked that it was the reason he came to Duke, the trust K has in this players.

Congrats to Luke Kennard who was named ACC Tournament MVP.