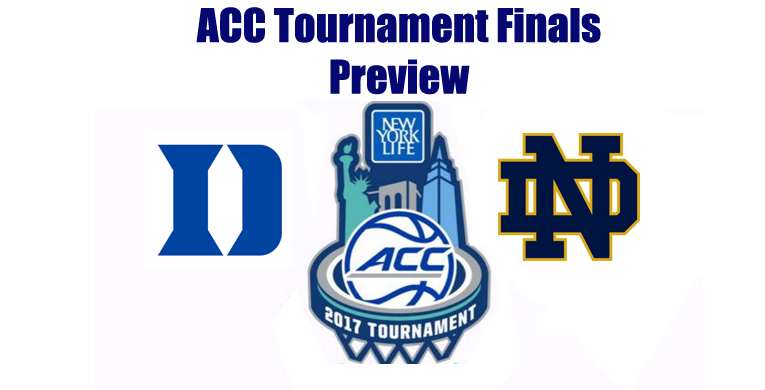 By Randy DunsonMarch 11, 2017No Comments

The Duke Blue Devils will collide with the Notre Dame Fighting Irish in the Championship Game of the ACC Tournament Saturday night from the Barclays Center in Brooklyn. The Blue Devils defeated Clemson, Louisville, and North Carolina to reach the final game, and the Fighting Irish defeated Virginia and Florida State in their path to this showdown. Duke notched an 84-74 victory over Notre Dame in the lone meeting this season.

The Duke Blue Devils rallied for 51 points in the second half in their convincing 93-83 win over the North Carolina Tar Heels in the Semifinals on Friday night. The Blue Devils shot a terrific 50% from the field and played strong defense, holding the potent Tar Heels to only 41% shooting. Jayson Tatum continued his red-hot play, collecting 24 points on an 8 for 15 mark from the field. The freshman forward has dominated in this Tournament, scoring 20 points against Clemson, followed by 24 against Louisville, and is now averaging 16.8 points along with 7.3 rebounds per game. Tatum put on a marvelous performance in the win over Notre Dame this season, posting 19 points along with 14 rebounds. Luke Kennard was a force on Friday night, scoring 20 points which a perfect 10 for 10 performance from the free-throw line. The sophomore guard is also locked in right now, scoring at least 20 points in four consecutive games, and is up to a team-best 20.2 points per game. Kennard registered 16 points in the win over Notre Dame. The Blue Devils look very hard to beat right now with Tatum and Kennard both on a roll and Grayson Allen has also been a force, scoring 18 points in his last two games.

Duke’s offense is red-hot, now averaging 80.8 points per game, ranking them 28th in the Country, and are shooting 47.4% from the field. The Blue Devils are conceding an average of 69.9 points per game, placing them 114th overall.

The Notre Dame Fighting Irish took the lead five minutes into the game and never trailed the rest of the way in their 77-73 win over Florida State in the Semifinals on Friday evening. The Fighting Irish were locked in offensively, shooting 47.5%% from the field which included a 13 for 27 effort from three-point territory. Steve Vasturia led the offensive charge with 18 points on 4 for 5 shooting from beyond the arc. The senior guard went a poor 1 for 9 for only seven points in the loss to Duke this season, and is now averaging 13.5 points per game. Bonzie Colson dazzled once again on Friday evening, sinking 18 points on a 7 for 13 clip from the field. The junior forward has now scored 18 or more points in four straight games, and is averaging a team-leading 17.1 points along with 10.2 rebounds per game. Colson was outstanding in the loss to Duke, scoring 17 points on 8 for 12 shooting and added nine rebounds. The Fighting Irish have now won eight out of their last nine games with their only loss in that span coming to Louisville. Notre Dame’s weak spot has been rebounding, as they were out-rebounded 38-26 in the loss to Duke earlier this season, and 41-23 on Friday night.

Against several Twitter wishes, I am siding with Duke in this contest. Duke is playing their best basketball of the season and are unstoppable offensively right now. Jayson Tatum has scored at least 20 points in three straight games and Luke Kennard has scored at least 20 points in four straight games so I cannot go against them. Duke looked great in their 84-74 road win over Notre Dame in late January, shooting 52% and held the Fighting Irish to 42.9% shooting in that one. Also, Duke is one of the best teams at defending the three, holding opponents to 29.7% shooting so I am confident they can slow a Fighting Irish team that takes a lot of three’s. Go with Duke in this one, 76-70.