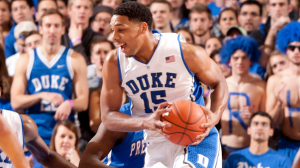 DURHAM, N.C. – Duke center Jahlil Okafor was selected as the Atlantic Coast Conference Freshman of the Week, while Miami’s Angel Rodriguez was tabbed ACC Player of the Week as determined by a vote of a selected media panel. Okafor earns the award for the second consecutive week after helping guide the Blue Devils to a 3-0 week and a team title at the Coaches vs. Cancer Classic.

Okafor averaged 14.3 points, 8.3 rebounds, 1.7 blocks and 1.3 steals per game in wins over No. 19 Michigan State, Temple and Stanford as the fourth-ranked Blue Devils improved to 5-0 on the year. He opened the week with 17 points on 8-of-10 shooting to go along with eight rebounds, two blocks and two assists against the Spartans.

The Chicago, Ill., native delivered 16 points, eight rebounds (seven offensive rebounds) and two blocks in the Coaches vs. Cancer Classic semifinal win over Temple and capped the week with his first career double-double in the title game against Stanford. Okafor had 10 points, 12 rebounds (six offensive rebounds) and a block to anchor Duke in the win over the Cardinal. He was named to the Coaches vs. Cancer All-Tournament Team, along with teammates Quinn Cook and Justise Winslow.

Okafor has scored in double figures in all five games this season and is averaging 15.8 points, 8.0 rebounds and 1.6 blocks per game, while shooting 60.0 percent from the field. He ranks among the league leaders in scoring, rebounds, offensive rebounds, field goal percentage and blocks entering Wednesday’s game against Furman (5 pm – ESPNU).

Rodriguez, in his first season with the Hurricanes after transferring from Kansas State, led Miami to four wins and national rankings in both the Associated Press poll (No. 17) and USA Today/Coaches rankings (No. 20) announced Monday. Rodriguez scored at least 13 points in all four games, including 24 points in the Hurricanes’ 69-67 road win at No. 8/7 Florida on Nov. 17. Twenty-two of Rodriguez’s points against the Gators came in the final nine minutes, and he drew a key defensive charge with three seconds remaining in the game. He followed that performance by earning MVP honors in the Charleston Classic, where he led Miami to three wins. Rodriguez flirted with a triple-double against Akron, posting 15 points, nine assists and eight rebounds. He had five assists and five steals in the Classic Championship game win over Charlotte.